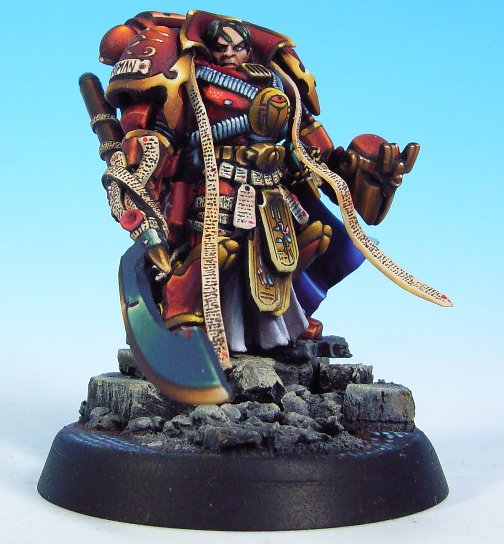 With the exclusions mentioned in “Part 1” in mind here is the army list! I will preface this though, you will see things that you might not normally consider as being in a Thousand Sons army. I urge you to look at the goal of this army.

The goal is to make a Heresy Era Thousand Sons army circa “The time of the Battle for Shrike.” Don’t look at fact that there are Berserkers in the army.  Look at them as a hand to hand element that if converted and modeled correctly would represent a Pyrae Cult heavy squad that will melt your face.

1.      Ahriman is a beast. He knows almost every chaos power and can do three a turn. Ya, I’m talking he can use Warp Time to re-roll hits and wounds then throw down Wind of Chaos and then Force Weapon someone. The fact that he can turn people in to spawn is kinda cool.

2.      Ulthizaar. Aka. Lash Sorcerer with Warptime. Well. In the novel Ulthzaar could read minds and pretty much jedi-mind trick people. Figured that’s about a good as justification to put Lash in as any army could have.

3.      Two Thousand Sons squads with Sorcerers with Warp Time. Again these are very durable have the 4+ invulnerable save represented by the “Kine Shields” of the Raptora of course. And the fact that their bullets are AP3 represents some manner of psychic powers being use to “Melta Faces.”

4.      The Berserkers. Well. They are in there because the army needed another HTH element. The high WS, STR, and INT will represent a greater percentage of this squad being from the Pyrae Cult. IE. These guys are sadistic. They will melt you and not think twice about it. Plus this does offer some cool conversion potential with fire and lightning coming out of their hands.

5.      Summoned Lesser Deamons. These will represent the unfortunate Thousand Sons who succumbed to the Flesh Change. In game turns they will offer a fourth cheap scoring unit that is fearless to go hold down an objective.  These will be modeled based off of space marine bodies to match the theme intent and the rest of the army.

6.      Nine Obliterators. These will represent the nine Automations that Khalophis used at the “Battle of Shrike.” These are mentioned a number of times in the novel and I feel like they will capture the essence of those robots very well.  We all know the power and cheese factor of nine obliterators but don’t under estimate the power of theme and fluff.  You should be able to avoid dings with a well painted and explained army selection.

Ahriman will ride with one of the Thousand Sons squads in a Rhino, while Ulthizaar rides in the other one with the second squad.

The three Rhinos will generally line up on the same side with some standard “Mech Wall Tactics.” With the nine Obliterators either coming in via Deep Strike or starting behind the wall and moving up after the tanks move.

I think this is a hard counter to a lot of Blood Angels Jump Infantry armies out there and also a number of Space Wolf armies out there as well. Against IG your whole army is fearless, so who cares about the dreaded  Psyker Battle Squad! You also have nine Obliterators to smash their tanks and planes. Most of your army has an invulnerable save so their guns aren’t going to AP you like they would everyone else.

Having Ahriman as a mobile Warp Time / Wind of Chaos platform is pretty dirty.

You have lots of kSons with their AP3 bolters to shred Multiple Small Units based armies.

And in HTH this army will eat most things. Kinda deceiving right?  Both Thousand Sons squads have HQ Sorcerers and Aspiring Champion Sorcerers to cast Warp Time and then shred people with nine re-roll hits and wounds attacks on the charge. That’s a lot of dead people. You have two units like that. Also, you have a HTH Berserkers squad which IMO is one of the best HTH units in the game as long as you get to charge with them. Lastly, you have the Lesser Daemons and Obliterators. Nine Obliterators on the charge makes things go away. Plus they can rapid fire nine TL Plasma Guns first then charge in with twenty-seven Power Fist attacks.

This is a very competitive and character filled army that really captures the essence of the Thousand Sons during the time of the Horus Heresy. I hope this article shows that there are great and fun armies out there in every Codex if you look hard enough! One of the things I love about 40k is that whatever the vision you have for an army; there are probably rules to use for it. Until next time – Happy gaming and Happy Modeling!

Advertisement
So what do you think guys?  Does this army cut the mustard? At first I didn’t think there was any way to make this army competitive on the table – I think I was wrong! – tpm