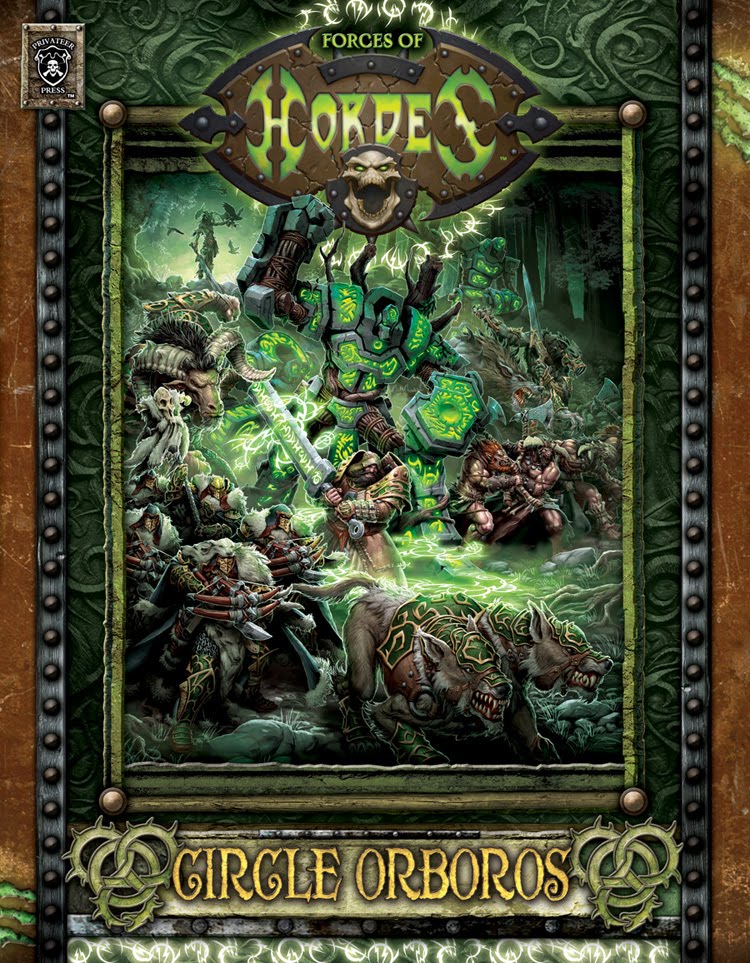 Just released this month, the eleventh book in a banner year, is Forces of Hordes: Circle Orboros. To those of you unfamiliar with the faction, these aren’t your grandma’s Druids. Lets take a look.

Cruel and manipulative in the extreme the Potents of the Circle will sacrifice anything to prevent the godlike Devourer Wurm from returning to the mortal plane of Caen. To this end they tap the magical power of his lifeblood which flows through ley lines beneath the earth, wielding it against the civilizations of man lest they grow numerous enough to draw the Wurm’s ire. Their protection of wild places is only a means to this end, as it is this natural energy that fuels their tremendous power, and keeps the Wurm strong.

The Circle of Orboros book is everything we have come to expect from Privateer Press’s force books so far with lots of great fluff and high quality photos and illustrations. Krueger the Stormlord is cast as the major protagonist of this book’s intro story. At the bidding of Cassius and Wurmwood, the new Circle Warlock, Krueger must take a diversion from his quest against Caen’s dragons to destroy a Protectorate refinery. This was a long awaited read, as it depicts for the first time a written encounter between ancient foes: the worshipers of Menoth, and the warriors of the Devourer Wurm. The side story, which portrays a collection of Circle potents convening to discuss Krueger’s potential execution as a traitor, reveals a lot about the scheming nature of the organization’s hierarchy. Following the intro story, the section on the Armies of the Circle provides more detail on their background while helping to answer questions the smaller fluff entries from the older books hadn’t completely explained.

With the majority of this book’s new models having already been released or previewed in No Quarter magazine, the theme forces were one of the few secrets left in this book. As in previous force books there are definitely tiers that offer certain Warlock’s clear competitive advantages, and tiers that seem to exist only to create more flavorful armies. One of the immediate problems with the Circle Tiers is the absence of Minions, which can work very well in many Circle lists. Farrow Bone Grinders in Particular can help out a lot of the faction’s squishier Warlocks throw spells at a greater distance. Some Warlocks still emerge as very clear winners however.

I think the best theme force in the book, and possibly one of the best in the game, is one of the ones already spoiled here on BoLS: Epic Kaya. This is one of those tiers where the bonuses are phenomenal, you’re allowed to take pretty much anything you’d want to anyway, and you’re only stuck taking one paltry thing you might not have wanted to. In this case that would be the Skinwalkers, but lets face it, the advance move on them is great, and helps them do their job of getting to and holding objectives even better. Win all around

I am also a big fan of Baldur the Stonecleaver’s theme force. Comprised, unsurprisingly, of construct and Druid related choices, this is another where the list restrictions don’t lock out any of the really helpful choices. Tier 1 starts you off by letting you put sentry or shifting stones even further up the field. Tier 2 gives battlegroup beasts AD for each sentry or shifting stone unit you take, and honestly you could probably stop here since wolds with advance deploy are amazing enough as it is. If you want to go on to tier 3 you will need to take at least two Woldstalker units, but the bonus for doing so will let you get them further up the board with an advance move. The tier 4 advantage? You guessed it: heavy construct warbeasts are each a point cheaper if you take Megalith.

I also really like Kromac’s theme, in large part because I think Tharn are one of the coolest aspects of the Circle. To get the best bonuses though you really can only use it for 50 pt or higher games. The theme restricts you to living beasts, Tharn units and solos, and the Lord of the Feast who gets to come along for the ride. Tier 1 makes Tharn Ravagers FA U and lets you take an extra White Mane for each Ravager unit you bring. If you include two of those units Tier 2 will give you a free UA that does not count against Field Allowance. Tier 3 is where things start to get expensive, but if you take at least two Whitemanes, it allows you to advance move a Warbeast for every two solos you take. I can’t help but think its worth it to start a Warpwolf Stalker an extra 6″ up the board. The final Tier gives your battlegroup stealth the first turn of the game for taking the Lord of the Feast. Very helpful if you are going to be advance deplying your warbeasts. This list is a spectacular glass cannon with most of it starting an extra 6″ upfield, and having tons of possible damage output but not a lot of armor. Only those who love Ravagers need apply.

Cassius the Oathkeeper and Wurmwood is/are the new Circle Warlock. The truly evil looking tree and its hooded companion are cool enough sculpts that I’ve almost had to physically restrain myself from buying them even though I don’t play Circle. Unfortunately I’m just not sold on their rules. They come with 2 top notch spells in Curse of Shadows and Stranglehold but in order for the duo to use them effectively you have to put your Warlock at risk from two fronts. You see, with Cassius himself only having enough fury to cast a single boosted to hit Hellmouth once per turn, you’re really going to want Wurmwood up there to try to gather souls to get more Fury. And since Cassius is already going to be up there trying to get range to cast you now have two models at risk of attack since they share a single damage bar. Unless I’m quite mistaken, this is the only example of a Warlock or Warcaster in the game who gives his opponent two models by which they might achieve a caster kill victory. While they do have a somewhat above average amount of damage between them, neither have very respectable defensive stats. The tree gets to add a point to its armor for the soul tokens on it, but you’re going to want to spend those anyway right? Especially when Cassius can spend them on the turn they’re gathered. Their feat helps, creating a forest covering the tree’s respectable 10″ command range. If it looks like there’s only one really big threat to worry about you can use Stranglehold on it, but that could easily cost you 3 fury against a target with high def or armor. Or some shifting stones can move the tree further backfield allowing Cassius to use Unseen Path to get himself further out of danger. But all these options feel unnecessarily complex when other casters can just use a spell like Teleport or Refuge to keep themselves out of harm’s way. And since the tree maxes out at 5 soul tokens, the cost to cast unseen path is exactly too much to allow you two boosted to hit castings of Hellmouth. So my initial impression is that the duo will be difficult to use, but I haven’t playtested them so I could be missing something. I do really like that a unique set of rules that was devised to give these very interesting characters their own flavorful playstyle. So despite my initial misgivings I know if I was a Circle Player I would already be painting up the pair to use in casual games. Not everything has to be tournament level competitive.

Moving on, the first of two new Warbeasts is the Warpwolf Stalker. Weighing in at a hefty 10 points, I think the creature’s mobility, good damage output with a potentially high P+S reach weapon, and animus that grants Sprint make it a welcome addition to the Circle’s forces regardless of cost.

The Wold Guardian is another great new warbeast packing an impressive punch some great special rules, and an animus that should have other factions drooling. Flesh of Clay causes enemies to roll one less damage die on ranged attacks against a model under its effects.

The new unit is the Warpborn Skinwalkers, who finally give the Circle a heavy infantry choice with a bit of durability for holding objectives. While not quite as tough as some other factions similar choices, these guys are a bit faster than your usual heavy infantry, and have the terror advantage.

Nuala the Huntress is the Tharn Bloodtracker character UA, and the 2 points she costs is definitely a worthwhile investment for the extra offensive potential and utility she brings to an already good unit.

The Reeves of Orboros Standard Bearer and Officer UA on the other hand, seems to bring little to a unit that already struggles a bit to make their points back. Giving Reeves Swift Hunter and Ranked Attacks is probably worth the 2 points they cost, but with Circle lacking any Warlocks that can buff their accuracy these aren’t the tow abilities I think people were hoping for.

The Tharn Ravager Chieftain UA is definitely a worthwhile buy for his 2 points. Granting the Advance deploy rule allows the Tharn to get into combat even faster, and since they have comparably low armor for heavy infantry, getting shot less is a very good thing. He also gives them Brutal Charge, which allows them to pose a threat to even the heaviest Warjacks.

Fans of Shifting Stones have a great new ally in the form of the Stone Keeper UA. If 1 point wasn’t already a great deal just to grant the unit Stealth, he also has a cool magic attack in the form of Rock Hammer.

The Druid Wilder Solo/Warlock Attachment is another useful addition to the Circle’s forces. As a special action she may remove or place Fury on friendly warbeasts, or cast the animus of a friendly faction beast in her command range.

One of my favorite new additions to this army is the Reeve Hunter solo. While he is theoretically capable of killing up to 4 models per turn, I think its the way this guy pairs with the War Wolf solo that has me really excited. Now you can take full advantage of the War Wolf‘s sic ’em rule for an investment of only 2 points.

~ So I think the new Circle book is another big win overall. But Minions are the ones I’ve really been looking forward to, so check back in a month for the info on the newest Hordes faction.

Author: Ben Williams
Ben Willimans is a Professional Painter and Columnist at Bell of Lost Souls. He has been involved in the hobby and art side of miniatures and the tabletop gaming industry for over 20 years. He has won multiple national painting awards.
Advertisement
Circle Orboros Review Warmachine-Hordes
Advertisement 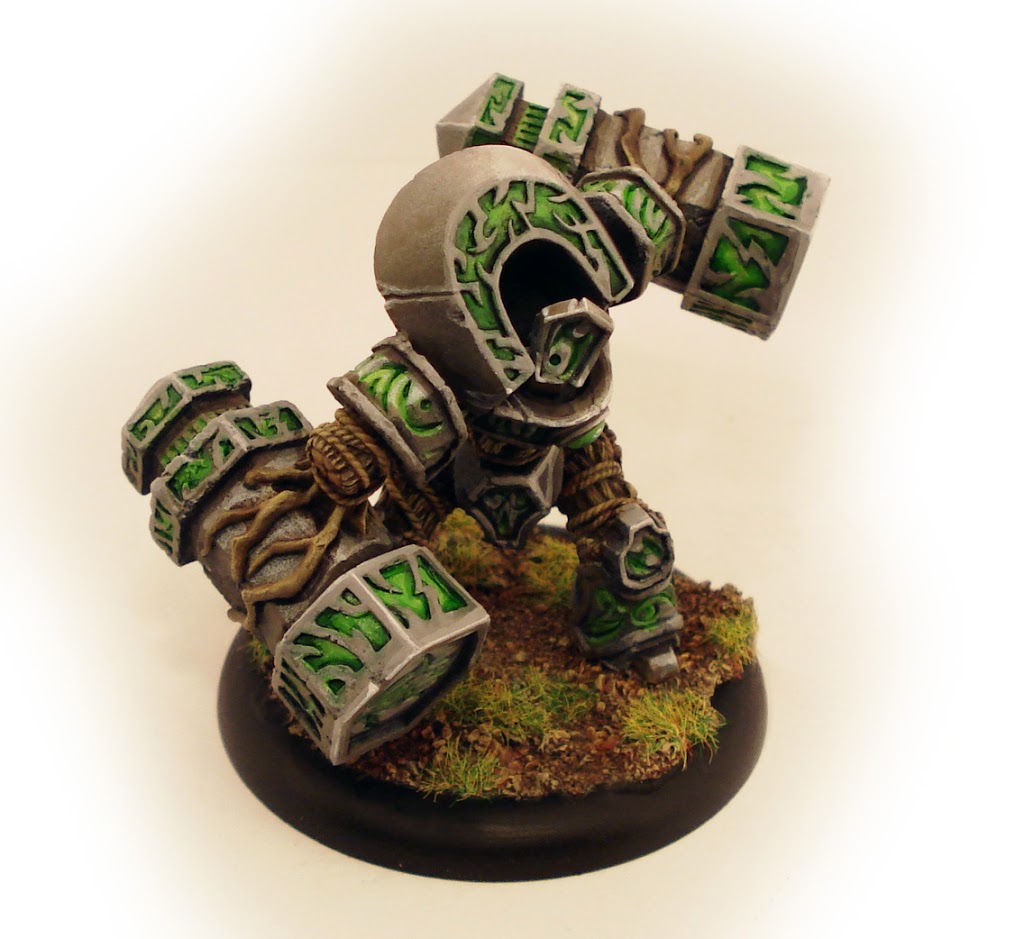