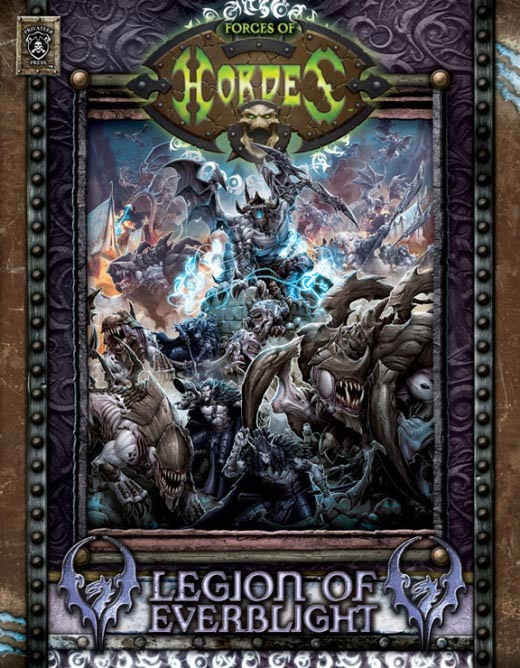 The Legion of Everblight book is finally on store shelves.  We’ve got a great look inside.
The third of the Hordes faction books was released last week; the draconic Legion of Everblight is out in force on tabletops around the world.  With a new book comes new models, new tier lists, new possibilities for Legion players everywhere.  Here’s what’s in store:

If you’ve read any of our reviews of other Forces books, you’ll know by now that Privateer Press has done a great job with them.  The production is full color throughout, and top notch.  The artwork is awesome.  There are full rules and descriptions for every model and unit in the faction, as well as new background material, tier lists for every caster, and painted examples of every single model.  The Legion forces book is no different. As we get closer to the end of the year, more and more of the “new” models are released and available before the latter faction books hit the streets.  In the case of Legion, the Scythean, Ravagore, and Stingers have been out for over a month- even longer for the Scythean.  The Nephilim Bolt Thrower (a light Warbeast with a giant crossbow) and Spell Martyr’s (effectively 1-use Arc nodes) were released earlier this month.  But that doesn’t mean there isn’t anything new in the Faction book.

New Warlock- Bethayne & Belphagor
Bethayne is a supportive spell slinger, with a personal light Warbeast.  Bethayne’s Feat boosts the attack and damage rolls of all magical attacks in her control area.  This means she’ll work very well with units like the Hex Hunters, or the Sorceress and Hellion.  Her spells include mostly buffing spells, such as Carnivore and Ashen Vale, but she has a couple rules that really set her apart from other support casters in the faction, such as Vayl or Saeryn.  First, Bethayne can arc spells through Belphagor.  Secondly, Bethayne can actually ‘meld’ with her Warbeast.  The full rules are too long to print here, but to summarize, if both models start their turn in base-to-base, they can merge into a single model.  Bethayne is removed from the table, and Belphagor gains her Fury stat, and the ability to cast spells.  I’m not sure if I like her yet- I need to wait until the Hex Hunters are released at the end of the year, and try her out a few times. Grotesques Infantry Unit
Although I know a lot of Legion players around the internet aren’t very excited about these guys, I think they’re pretty cool.  They’re a very cheap winged infantry unit.  They aren’t overly fast, and their MAT and Command aren’t so hot, but Fearless and the Gang special rule mean these guys will be an effective MAT 7 and P+S 12 when attacking an enemy model engaged by another Grotesque.  Are they spectacular?  No, but at 4/6 points, they don’t have to be.


Hex Hunters & Bayal: Character Unit Attachment
The Hex Hunters are an infantry unit with the same points as Swordsmen.  Instead of a main-line infantry unit with an overwhelming Weapon Master attack, the Hex Hunters trade a bit of armor and hitting power for SPD 7, Stealth, Pathfinder, and an additional RNG 6 POW 13 magical attack that they can use as a star attack, AND after destroying an enemy model in melee, thanks to their Battle Wizard ability.  Their Magic Ability is only a 6, but with a MAT 7, there’s a good chance they’ll get to use that magic attack when they charge.  Additionally, the Hex Hunters’ weapons are magical, finally giving Legion a unit capable of taking on Incorporeal models.  Bayal is a character UA for the unit, giving them Hunter, and Advanced Deployment.  He also has Weapon Master, two attacks, and Frostbite as an additional magical attack (the same spell Khador Greylords have).  These guys are awesome, and I can see running them in a lot of my lists.  They won’t threaten heavy Warjacks in the same way as Swordsmen, but Hex Hunters will still kill nearly all infantry (including medium, multi-wound models), and several of them will put a serious hurt on Lights.

Blackfrost Shard
This is a 3-model Swordsmen character unit.  Think of them as being similar to Khadoran Greatbears.  All have Pathfinder, Weapon Master, Magical Weapons, the Ice Bolt and Ice Cage spells, and Immunity: Cold, both new for Legion infantry.  Each model grants the unit a different ability.  One has the Disbinding spell in addition to the two above, making the unit effectively immune to enemy upkeep spells.  The next model has the Kiss of Lyliss, an offensive spell that grants friendly models +2 to attack and damage rolls against that target for a round.  The last gives the unit Stealth.  This is a very, very cool unit, and again, I can see running them in a lot of my lists just due to their supportive abilities, not to mention the damage potential.

Annyssa Ryvaal- Raptor Character Solo
This is the first character cavalry solo in the faction.  No, she’s not a UA for the Raptors.  She’s more like the Warchief.  She’s a light cavalry model, with all the benefits that go with it.  She has Stealth, Parry (very cool!), Poison on her bow, Prey (also very cool!), and Snap Fire on her bow.  She also grants Raptors that can see her +2 to their attack rolls.  Did anyone say RAT 9 Raptors with Poisoned bows??  Yes please!  How about an effective MAT 10 on the charge with Weapon Master?  Fantastic.  What Annyssa doesn’t have is a sword.  She does get two shots with her bow if she kills an enemy model on the first shot, and with smart use of the Prey ability, she’ll have an effective RAT 9 and POW 12 bow with 3 damage dice against living models.

Most of my critiques of the book remain the same now as when the first Warmachine Forces books were released.  I’d love to see alternate paint schemes and a map included.  I also admit to being a little disappointed with the main story.  It is a good, solid story, and featured a lot of information about Bethayne, the new Warlock, as well as Dr. Arkadius (one of the upcoming Minion Warlocks).  But it didn’t have much in the way of “revelation”.  For example, the Cryx and Menoth books both revealed important information that will certainly come up later in the overall plot arc.  The story in the Legion book didn’t.  That last note is a minor gripe, and definitely shouldn’t dissuade you from picking up the book.

I’m liking what I’m seeing, and with this as my main faction, I’ve been busy painting models and coming up with tier lists.  Circle is next, followed by the Minions book to finish up a HUGE year for Privateer Press. 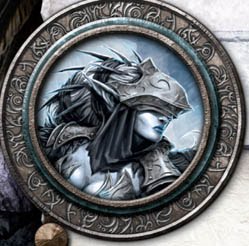