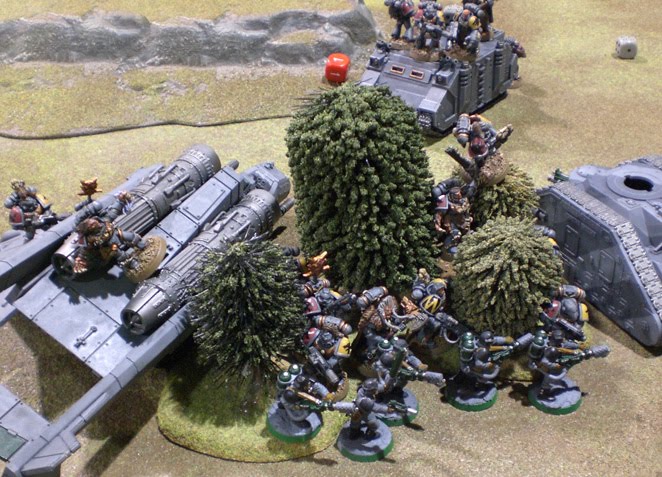 There’s much to be said for having a positive attitude when it comes to playing games of Warhammer 40K.

Adam from the Space Wolves blog explains how your positive or negative approach to a game can make or break a battle before it’s even begun.

“Oh god, I’m not playing you am I?”
Those were the first words to come from my opponent’s mouth in the first round of a 3 game tournament.

It didn’t matter that he had a competitive Tyranids army while I had brought my favourite configuration of Space Wolves.

It didn’t matter than I’d known and played him for years.

It didn’t matter that the mission favoured his army.

What mattered to him was that I was a competitive player with a strong army and I knew how to play it.

What mattered to me was that he could swarm the board with cheap troop choices while drowning me in multi-wound monstrous creatures so that I wouldn’t have a hope of achieving the mission.

However, this never happened, because my opponent had a cloud of doom above his head before the game had even begun.

Bottom line is -Negativity can ruin your game.

Stay Positive, Play Positive
Many people believe that a negative attitude can have a detrimental effect on your game from dice rolls to tactical decisions.

Often, negative thoughts are reflected in your dice rolls.

This is complete hogwash, but we tend to focus on the positive or negative depending on our mood.

It’s important to stay positive throughout your game, even if you’re taking a real hammering from the very first turn. You never know when the tables might turn.

There are a number of ways to stay positive throughout your game. The most important way is to have a passion for your army and Believe in the abilities of your little plastic dudes with little plastic guns. But there are three other extreme versions:

Common Sense
Know the abilities of your army and your opponent’s army. Simply go with what feels right and play the game. Do the best you can and if all else fails, take down his favourite unit to earn a moral victory.

Revenge is a dish best served cold. If you can’t remain positive about winning the game, at least you can focus on taking as many of the blighters with you as possible!

Mathammer
Positivity for the logical man or mathematician. Mathammer has its ups and downs, but allows for calculated risks and clear strategy.

I’ve had many instances of my whole army firing upon 5 models which seem to pass every armour save and cover save under the sun. It’s not an inspiring experience.

Personally I would always recommend Common Sense over Mathammer…or failing than, a pair of nice rose tinted spectacles.

Rose Tinted Spectacles
Some players triumph thanks to the inane belief in their army. Believing that your troops are crack shots, or quite simply better than their points cost equivalent, can go a surprisingly long way.

My buddy James (often mentioned in my articles) is one such individual with some of the most inane beliefs I have ever encountered.

With no concept of statistics, he believes that his Chaplain led Assault Squad can tear apart any enemy while the rest of his army provides covering fire.

The scary thing is that this belief more often than not manifests itself in spectacular ways.
Other times it doesn’t and his troops leave this world they way they entered it -screaming!

However, his tournament experience is always more consistently positive than mine. Sure, I often rank higher, but he will have a series of great and close fought games. Meanwhile I find myself bouncing up and down the tournament ladder. Who knows where I’ll finish?

Don’t Stop Believing
Ignorance is bliss. Ever since I threw Mathammer out the window and played by common sense with a passion for my army and slightly rose tinted spectacles, my Space Wolves have performed admirably.

In fact, I’m reminded of a recent game against an Imperial Guard force where I described the game as the Wolves of Fenris howling triumphantly upon the wrecks of crashed Valkyrie gunships, their fur cloaks billowing in the wind before charging into the ranks of Guardsmen and slaughtering them with bludgeons and battle axes.

But what actually happened, was that the Imperial Guard blew up all the Space Wolf transports, leaving them to slog it on foot and take horrendous casualties. I lost more Grey Hunters to dangerous terrain checks as they climbed through the Valkyrie wreckage and killed 6 Imperial Guard veterans before they had to cover until the dying turns of the game.

Not quite the scenes of heroism I had depicted in my mind, but I still won the game!

So buck up wargamers! How do you focus and stay positive in the face of a tough game or crushing defeat?