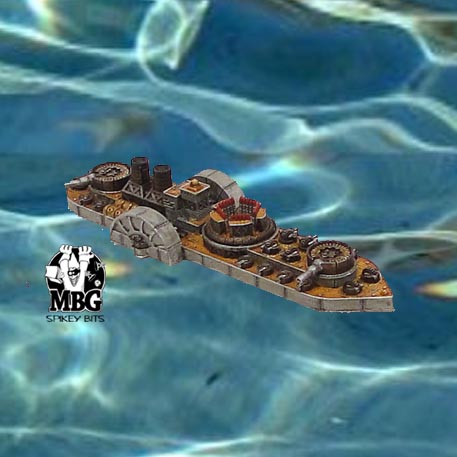 Hey guys MBG here with a guest post by  Meeker.  Recently Meeker, like a lot of people around the shop, got into Dystopian Wars and are loving it.  There just seems to be some real world appeal to the game that is really catching on.

Dystopian Wars plays very well, and Spartan Games has a large range of miniatures coming out the next year for it- so the game is definitely poised to be a hit!

Dystopian Review: FSA Starter
Right out of the box, the FSA starter looks amazing. The level of detail is quite stunning. When I opened it up the first thing I went for was the battleship, because lets face it you got;  massive gears, pistons, and you can even see the ammo belt for the main guns. When you look a little closer you start to notice a number of windows, doors, stairs, and a massive amount of rivets. Lean in closer yet, and you can even make out viewports on the doors. No doubt about it, the detail is simply amazing. Federated States of America Starter Fleet
I’m not sure how well known it is, but previous Spartan releases had been plagued with production issues. I won’t go into details but the but to me it really brought down the overall experience. One step in fixing the problems resulted in a fair number of one-piece figures. It seems like that is now the trend at Spartan Games, as a lot of the Dystopian Wars figures are the same. The bombers, fighter stands, and frigates are all one piece each.  Plus they etched in the firing arcs on the stands with this release- very nice. The cruisers and battleship each have a main body with separate main turrets, plus each ship has three generator options. There is really no assembly required, although the turrets and generators could be magnetized or glued on if you wanted.
Believe it or not the one-piece nature of the FSA ships made painting my fleet somewhat challenging. If you plan on painting the windows, I’d forget about it right off the bat.  There are a number of windows that are hard to reach due to the smokestack and various turrets. Reaching down into the recessed deck sections and the mechanical areas is also very awkward. But really is too much detail a bad thing?  Regardless I’ve seen all the models that are out, and it seems to be a “problem” only with FSA ships. FSA Armada engages a Blazing Sun fleet at point blank range. The 360 degree arc of the FSA main guns make it possible to close and fire without exposing the majority of their ships’ hull, while the enemy must maneuver to make broadside attacks.
The kit I got wasn’t entirely without casting flaws however. There were some small sections around the waterline where the resin didn’t make it all the way to the edge of the mold (generally on larger ships). In other cases, there was a fair amount of excess also around the waterline. The frigates were especially bad.  The raised rim around the deck on one cruiser had also broken.  Spartan does pack them well though, with foam and rubber bands to hold problem pieces together.
Overall though, I was thoroughly impressed with the kit. For what you pay, you get a decent size fleet, a small start to an air force, stat cards, and some of the best starter kit templates & tokens I’ve ever seen. It’s a solid deal for a very ambitious game. This is just the tip of the iceberg  for Dystopian Wars