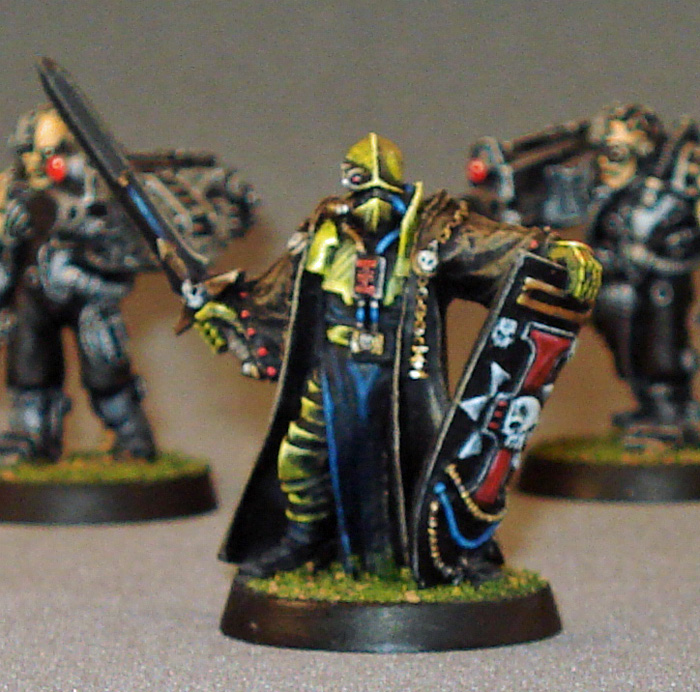 This article might as well be called “Grey Knights: Who Cares?”  That’s what inspired this brief perusal through the library of Codexes, trying to find an idea or two, Be It New or Be It Recycled.

Hello again boys and girls, Unicorns and children of all ages, today’s article is a straightforward look at some underused or under appreciated options; the hope is to discover units in our old Codexes which will make the book seem new again.

And, as always, I’ll show you mine if you show me yours.

Er… what I meant to say is since this thing has to have some pictures, I’ve dug into my old armies for some examples of the larger point.  Let’s get started.

Let’s Start With a Theory Ye Ol’ Blogosphere is full of ‘wisdom’ casually dropped by well-meaning players like turds on a freshly mowed lawn.

Okay, so maybe I’m being a bit crude today (and possibly a hypocrite…), but I think it’s a fair point.  Despite it all, after the conversations are had (by that, of course, I mean the flaming and fighting) it seems most folks take for granted this larger notion of what’s ‘best’ in a book.  Before long any new idea, twist, or innovation is immediately shot down by an educated public.

Here’s my answer:  prove it!

Still, we can’t really do that, barring running into one another at an event; Adepticon anyone?  But we can talk out some ideas.

Thinking Outside the Box: The Past

I didn’t just come up with this for the point of writing yet another Tuesday offering for Bell of Lost Souls; no, I’ve been fiddling and experimenting with different units for almost twenty years.  Admittedly, I had plenty of failures along the way, but here’s some armies I built around an idea only I believed in… at first!

This isn’t a ‘yea, me’ post – I simply want to illustrate my belief that you don’t need cookie-cutter Internet armies to do well, wherever and however you enjoy playing this game.

Anyway, all these examples represent the past; none are anything but average at best in the current environment; after all, when my Hybrid Eldar were doing well there were no Space Wolves and Imperial Guard dominating the scene.

The game has changed.  Times change; we need new ideas!

A favorite game in the favorite local game store is pulling out an old Codex and trying to Theory-Hammer a fresh approach.  Here’s some ideas I’ve been toying with recently…

WARNING!  Kids, don’t try this at home!  Just because you read it on Bell doesn’t mean you should run out and try it.  Your ‘first-army-money’ should be carefully spent on the tried and true basics; ask a grownup (or what passes for one in your local area) for help.  Once you’ve learned the game, you’ll be in a better position to judge what you might want to try.

Noise Marine Pillboxes:  5-man squad with Blastmaster sitting inside a Rhino.  Basically a scoring, pinning Str8 shot out of the top hatch of a Rhino; sit it on an objective and use it for some extra fire support.  If the enemy gets close, they’re still Marines at Ini5.

Daemon Prince of Tzeentch with Wings, Warptime, and Bolt: fly up and shoot the unit out of its ride, then charge!

Burna Boyz in a Battlewagon: stolen from Dash of Pepper, this idea is underused and underrated!  Roll up and drop a template in the sweet spot, then multiply that by the number of Burna Boyz.  Nothing lives.  Nothing!

I’ve got nothing, but I’ll echo a sentiment I read here on Bell a few weeks back: does every army in the galaxy employ only Veteran Squads?

I take that back; here’s one I stole from Goatboy: take a Long Fangs Pack with two Missile Launchers and three Heavy Bolters, then attach a Wolf Guard with a Cyclone Missile Launcher.  It’s gross on a few levels, shooting four missiles and nine heavy bolts a turn!

I love this ‘Dex entirely too much, so it’s hard to see past my army.  Still, I’ve been toying with the idea of taking four Heralds of Tzeentch on Disks (jump infantry) with Bolt and Breath and dropping them in one large unit of Horrors surrounded by smaller units of the same type.  The idea is to support your Crushers and/or Fiends by leaping around doing dirty to the opposition while hiding in the various units of Horrors.

It’ll ruin your day when your opponent charges your super-unit of Toughness 3 Horrors, dragging all those Heralds along with ’em!  It’s why it’s a fun idea and not serious.

I had a conversation with Wyatt ‘Paintraina’ not too long ago about the effectiveness of the Thunderfire Cannon… naturally I can’t get the idea out of my head!  My comment was this: “Tremor and Bolster Defense is a tactic to make a counter attack army with.”  I think it could work; make a firebase to hang out in the terrain, a mobile element to harass the enemy, and an idea for grabbing objectives later… then start blowing something up!  I’m not quite to a list yet, but I’m toying with the idea of Ironclads and Land Speeders.

Last we come to an army I’m currently building.  I intend to do the same thing with it I did with Daemons: play out numerous combinations until I find what works for me.

Still, there’s an idea I’m planning to supplement my Hive Guard and Tyrannofexes, Termagants of Hormagaunts – I’m going to test a large unit of Shrikes and two Harpies.  The former will provide disruption and forward-synapse while the latter will pick off weak elements with either shooting or close assault, depending on the situation.

I haven’t seen it done in a serious army – and there might be a really good reason for that.  Still, nothing ventured, nothing gained; regardless of how it works out, I’ll have fun getting there!

With Grey Knights coming out it’s hard not to get caught up in the excitement about something new… but not all of us have the money or the inclination to jump on the bandwagon of each successive Codex.

Just like women shop in their closet, we can shop in our collection. (Not to discount the Girl Gamers and Unicorns out there!) Not every idea has to be good, it just has to reignite your passion for an old army.

So go on, try it. If someone tells you your idea sucks, tell them to prove it! In the end, it doesn’t really matter how that works out.

Here’s the discussion topic for the day:

1) What success have you had in the past or present taking advantage of something others thought wouldn’t work or wasn’t widely accepted internet wisdom?

2) I’ve no doubt embarrassed myself dropping my ideas on an unsuspecting public! Your turn: what ideas or combos have you been itching to try or think could work?