A couple of years ago I read a Fantasy novel entitled Blood for the Blood God. The main character was the Skulltaker and he was depicted as a mortal champion of Khorne, heavily enhanced though. The story is a tale of cold blooded revenge and I loved it. In fact I loved the story so much I was infused with the desire to create a pure Khorne daemon army.

I have little desire to build any daemon armies that feature units from the different gods and I also wanted to build an army that would have an excellent theme. The Skulltaker riding a juggernaught is my central character and he leads a large unit of Blood Crushers with another Herald that is his lieutenant. I used the new Fantasy Khorne Lord mounted on a juggernaught to represent the Skulltaker. All of my Crushers and Bloodletters are highly converted… Brandon Palmer from GMM Studios was commissioned to paint the army and he did an amazing job! I will have to say this is by far one of my favorite armies yet.

So this article is all about how to build a deadly Khornate daemon army (KDA)… You too can field an entire army that ignores armor saves in close combat!

Anti Deployment
What is anti deployment? Anti deployment is starting with units in reserve. It used to be that each player would take turns deploying one unit at a time. Now one player first deploys their army then the other player deploys theirs. I have noticed a lot of players don’t use the ability to hold units in reserve and I think they are missing out on a potentially great tactic. Using anti deployment has been with us a long time… Wolf Scouts, webway portals, terminators, drop pods and the Monolith all come immediately to mind. Deployment is meaningless to a daemon army and this is one of their biggest advantages. Unfortunately there are still lots of players who believe that daemons are not competitive because the entire army has to deepstrike and the preferred wave might not come in first. Breaking your army into two balanced waves and using icons can greatly help to mitigate the risks associated with waves and deepstriking.

I mention this first because it is the number one misconception about daemons.

Versus Mech
Funny things happen on the Internet… You know that whatever you say there will always be at least one person that will want to throw cold water on your heart’s desire. Case in point… There is a general consenus that daemons are weak versus mech but in reality you can build an army that counters mech. I have a Bloodthirster (beautiful model from the nice folks up in Canada from Ultraforge) and two Soul Grinders, both with tongue and phleghm to deal with mech. Tongue is basically a 24″ railgun and it wrecks Rhinos very efficiently. That’s why I take two Soul Grinders and typically drop them in the same wave… You start popping those flimsy transports and your opponent is going to have some problems.

Walkers
Another Internet myth is that Blood Crushers are auto screwed when charged by walkers. First no one can say that a walker is guaranteed to charge the Blood Crushers. They move at exactly the same speed! No matter what anybody tells you the game does not simply boil down to rock-paper-scissors. What I have found is that my opponents are afraid of my Bloodthirster and two Soul Grinders… But if they do indeed get to charge my Blood Crushers I have a Herald with Unholy Might and Fury… He is S7 on the charge and auto pens AV12 whenever he rends irregardless of who charges. I also have a Blood Crusher in the squad with Fury and he pens 67% of the time when he rends if he is charged. Statisically it won’t take more than two full turns (i.e., four rounds of close combat) for my Blood Crushers to pop a walker. My point here is that the Blood Crushers are not my primary threat for walkers BUT they can deal with them AND it’s great to see the look on my opponent’s face when my Herald crushes their dreadnaught… It does happen too!

I have always been a follower of Nurgle as well and wanted to add the daemon prince to my army. Here is how I typically run mine:

*This is my one non Khorne unit so the army is no longer purely Khornate but I really like the Nurgle daemon prince a lot better than his Khornate counterpart and have modeled the prince as a ‘counts as’ Khorne daemon prince. To me the Nurgle prince is the best choice and I didn’t give him any psychic powers in an attempt to stick as closely possible to the original theme. T6, always wounding on 2+ plus Cloud of Flies are both of great value in terms of performance. My prince once got into close combat with a Nurgle Prince from the CSM codex and beat the living snot out of it, the CSM prince had warp time too.

Versus meched up armies it’s great to have another flying monstrous creature to tank hunt besides the greater daemon (Bloodthirster). Once you start popping a few transports it certainly makes it a lot easier to swing the battle in your favor. I will always use my greater daemon to destroy Land Raiders, it’s almost a sure thing unless he is hitting on sixes, so even if he dies the next turn it’s worth the trade. The daemon prince is great for taking out Chimeras and Rhinos. Using the flying monsters to take out tanks means I can focus the two Soul Grinders on dropping pieplates of death and it’s a strong combination.

The Soul Grinders and Daemon Princes are your staple heavy support. KDA has no shooting except if you opt for Grinders. That’s just the way it is unless you want to pay 15/20 points to arm a Herald (BS3) or the Bloodthirster (BS4) with the equivalent of a plasma pistol that doesn’t overheat. I don’t think these guys spend much time at the range shooting so to me I’d rather use those points for another Icon. I will note that the plasma option for the Bloodthirster while expensive can really help to eliminate pesky skimmers you can’t just ever quite reach in close combat.

This army needs some shooting and that’s where the Soul Grinder comes in to the equation. I run two both with tongue and phleghm. Tongue is a 24″ railgun. Phleghm is the equivalent of a battlecannon but does not count as ordnance so you can fire it and still assault. I run two and stick them both in the same wave. They can protect the Bloodletters and keep them out of harm’s way. Two pieplates per turn adds up quickly and works wonders versus horde armies such as Tyranids and Orks. They are also able to fleet and are scary monsters in close combat. Even the relic blade can’t pierce their armor and against lower strength MCs they might just get lucky. They hit first against Carnifexes and can beat them down if they can kill them before they swing back. Their only real weakness is meltas and high strength MCs. You have to screen them if you want to ward off melta shots. Personally I think they are much more effective overall versus daemon princes. Tongue is excellent versus Rhinos and Chimeras… It’s very important to crack them open early and expose their passengers.

Troops
Bloodletters are your only real choice. If you are playing an objective based game these are your scoring units and if they go to ground in cover that’s a 3+ save… Coupled with T4 they are as hard to eliminate as your Space Marine. Not quite as good as a Plaguebearer but if you take large squads they can hold up well versus lots of enemy shooting. You’ll need two to three big blocks and one unit should have an icon. I’ve taken out big squads of termies with them on the charge – they are great in assault which is their primary intent.

The Fury of Khorne
Here are my heavy hitters! They are the straws that breaks the camel’s back. The units I listed above represent your rank and file. The units below form up my vanguard:

Bloodthirster: Unholy Might, Blessing of the Blood God
He is the best of the bunch and highly appropriate for KDA. He is very fast, very strong and highly resilient with T6 and WS10. I6 on the charge, he will hit first most of the time. Armor save 3+, invulnerable save 4++ and 4 wounds.

Skulltaker: Juggernaught
This is the daemon who inspired me to build the army! He has WS7 so any unit with WS3 is only hitting on a 5+. He rends on 4+ and any unsaved wound is instant death unless the target model has Eternal Warrior. He is very Killy but he needs some help so I typically run him with another Herald…

Herald: Juggernaught, Unholy Might, Fury, Blessing of the Blood God
This is my ace versus armor in close combat. He auto pens walkers when he rends, even when taking the charge. He has taken out landraiders and no one ever saw that coming.

6x Blood Crusher: Instrument, Icon, Fury
This forms my Khornate deathstar along with the two Heralds. They can suck up a lot of pain and dish it right back out. I like to deepstrike the unit right in front of the enemy line. They shoot the hell out of them then possibly charge them. When all the smoke clears they are still there and ready to go. It’s just plain sick as can be.

NOTE:
I have another variant of this army that features the Skulltaker with three Heralds (all kitted as above) sans the Greater Daemon. I also drop off two of the Blood Crushers. This is one of the ultimate deathstars in 40k with their one new weakness being Daemonic Excommunication (Grey Knights). This unit can absorb even more firepower and dish out more pain. They also cover a lot of space on the table so once they’ve arrived it’s going to hard for your opponent to hide.

Flesh Hounds
I felt I should mention this unit – I have never used them and feel that these points should go towards more Bloodletters. Sure they are fast as can be and have a lot of attacks but unfortunately they don’t have Hellglaives. They are the weakest choice for KDA when compared with the other units.

Conclusion
So there you have it from soup to Khorne nuts. I’ve done quite well with the army versus just about every other army out there. They are a bad news for both Space Marines and Chaos Space Marines in general. They have the resilience to weather a turn of shooting from IG then crash in and wreck the parking lot. I find KDA to be a niche within a niche so to speak and if you happen to play daemons I think you’ll know exactly what I mean.

Do you like to play assault armies? Do you miss fielding a pure Khornate cult army? If so then this army is right up your alley!

Author: Steve Turner
Steve turner is a competitive Warhammer 40k player and avid hobbyist. He has been actively playing for over 20 years. He began writing for BoLS in 2013.
Advertisement
Armylists Chaos Daemons Tactics Warhammer 40k
Advertisement 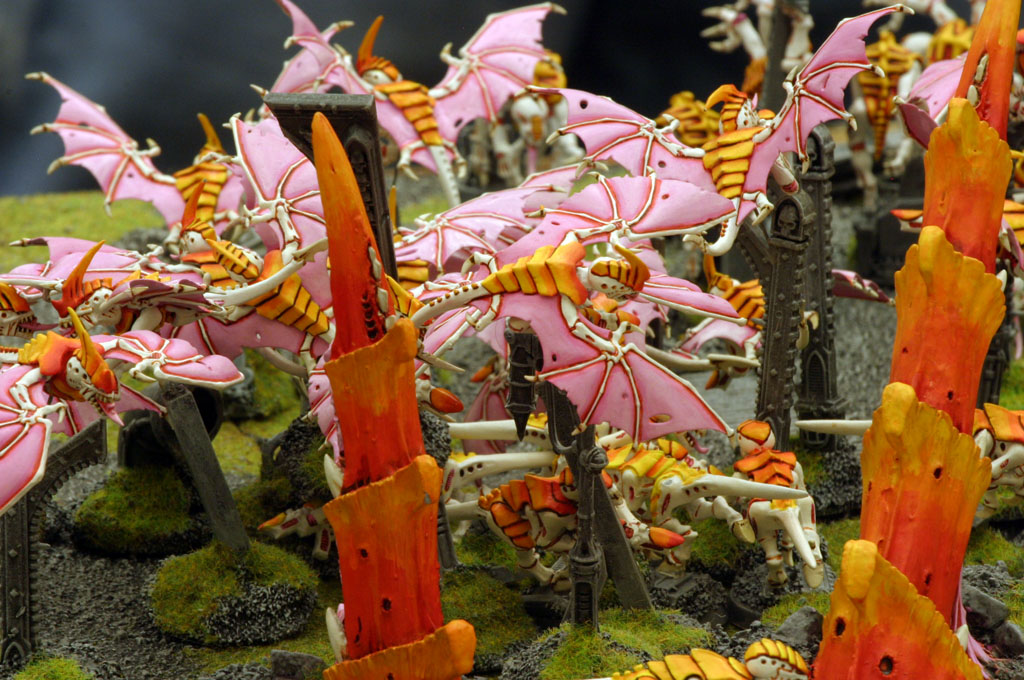