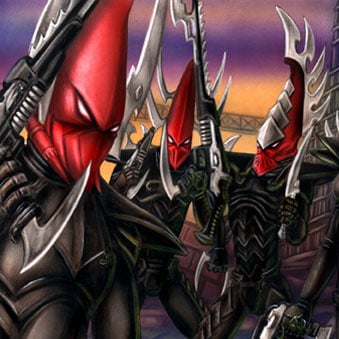 Introduction
This article focuses on using the basic Warrior in a mounted Dark Eldar army and is geared more towards fighting mechanized armies such as Imperial Guard and Space Marines/power armor.

I am fairly new to Dark Eldar. I currently have more wins than losses and I have primarily fought against Space Wolves so far. Warriors are rather cheap for what you get and are very good at shooting. The splinter rifle is poisoned which works great versus high toughness enemy units such as Thunderwolf cavalry plus they have access to dark matter weapons (i.e., dark lance, blaster and blast pistol). This mix of weaponry makes them quite versatile – their shooting is effective versus both infantry and armor.

Warriors are not bad in close combat due to their high initiative and WS4 versus weak enemy units such as Guardsmen, Gaunts and even Space Marine Scouts. While Scouts aren’t all that common, Guardsmen are and sweeping them in close combat is both fun and can potentially win games. Sure it’s not that hard for most units to beat down Guardsmen but still it’s an advantage you can take advantage of in certain situations – it’s much better to crack open a Chimera and charge what spills out rather than sit back after the smoke clears and eat lasguns to the face. Once a squad of Warriors have gained their first pain token they are fairly resilient versus lasguns. Imperial Guard is a tough matchup for Dark Eldar so you’ll need every advantage you can get in these games. Obviously Warriors aren’t going to cut down a squad of Grey Hunters or Blood Angels assault Marines in close combat so you need to carefully think it through if you decide to assault with them.

Raider Squad
Here is the basic build I use now:

I run three of these units as the core of my 2000 point army and these are my only scoring units. They have a good leadership (9) so you don’t have to worry too much about them breaking due to morale checks or pinning tests when their Raiders are popped which is important as it will happen more often than not if you keep them embarked. Once they’ve acquired their first pain token they are quite resilient to taking casualties if their Raider is destroyed.

I tend to move my Warriors a lot during the beginning of the game in their Raiders to put them in the best position to fire both the blaster and turret mounted dark lance on the vehicle. I would rather move about using cover to block off enemy shooting at the raiders early in the game rather than potentially sacrifice these skimmers for a relatively few number of shots at enemy armor. The Raider has a small footprint and is fairly easy to hide.

Equipment wise -the venom blade is very cheap and wounds on 2+. The Sybarite has four attacks on the charge and with a good roll to hit should score a couple of wounds on the charge. I take the venom blade because one wound can spell the difference between winning and losing a round of close combat… It’s just that simple and the poisoned blade can provide a big advantage versus Guardsmen and Gaunts in close combat.

Reaver Jetbikes Synergy
I also run a unit of six Reaver jetbikes with two heat lances which works well in tandem with the three squads of Warriors mounted in Raiders. I prefer the heat lances over cluster caltrops as I feel that the ability to reliably pop an enemy tank has the most value since mech is so popular. The Reavers invariably draw some of the enemy fire off the Raiders which helps as well. Venom Squad
Here is the second build that plan to use in the future:

This unit cost less points overall so I could probably run up to four of these squads if I decide to completely switch over from the Raider to the Venom. This unit is obviously geared more towards anti troop with the dual splinter cannons mounted on the Venom and is a great deterrent versus enemy units such as Long Fangs and Thunderwolf cavalry. The overall range of the Venom equipped as thus is effectively 12″ for movement plus another 36″ for the range of the splinter cannons, so they don’t have any problems targeting enemy infantry units. Note that I am waiting for the official model to release from Games Workshop before I use any Venoms.

Pros and Cons
There is a tradeoff between the two units as the total number of dark lances would drop if I completely switched over from the Raider squad to the Venom squad plus the small squads of Warriors are basically only good at holding objectives and firing the blasters and blast pistols. Therefore I think the best approach would be to use two ten man squads in Raiders and two five man squads in Venoms. You lose two dark lances and gain two pairs of splinter cannons. This approach to the overall army build increases it’s overall versatility without a big sacrifice to it’s ability to eliminate enemy tanks. Most Dark Eldar players that run mounted armies run three Ravagers with dark lances plus you can also field Trueborn and/or Scourges if you want to further increase your total number of lance weapons.

Conclusion
I have found Warriors to be a solid troop choice and prefer them over Wychs. Wychs are an assault unit and while very powerful in melee it only takes one well placed template to decimate a squad – thus I don’t believe they are a good choice for holding objectives. Warriors on the other hand can dismount and hold up okay if they are sitting in cover. I do run one squad of Bloodbrides in a raider with either Lelith or a Succubus attached. The extra attack adds up per Wych and if they are destroyed after taking out a key enemy unit it’s not a big loss for me.

I had a couple of games versus webway portal (WWP) armies at Adepticon this year and I think based upon what I saw they are currently underrated. Mounted armies are obviously much more popular. If you are planning to start a new Dark Eldar army then Warriors are a great choice for the reasons I listed above in the introduction – namely Warriors are a cheap troop choice, have a high leadership, are very good at shooting versus infantry and armor plus they are highly mobile when mounted in a transport. There are many ways to build a competitive Dark Eldar army and the use of Warriors is fairly easy to grasp for the beginner.

So what’s your take on Warriors as the core of the Dark Eldar army? What type of builds do you like?

Author: Steve Turner
Steve turner is a competitive Warhammer 40k player and avid hobbyist. He has been actively playing for over 20 years. He began writing for BoLS in 2013.
Advertisement
Dark Eldar - Drukhari Tactics Warhammer 40k
Advertisement 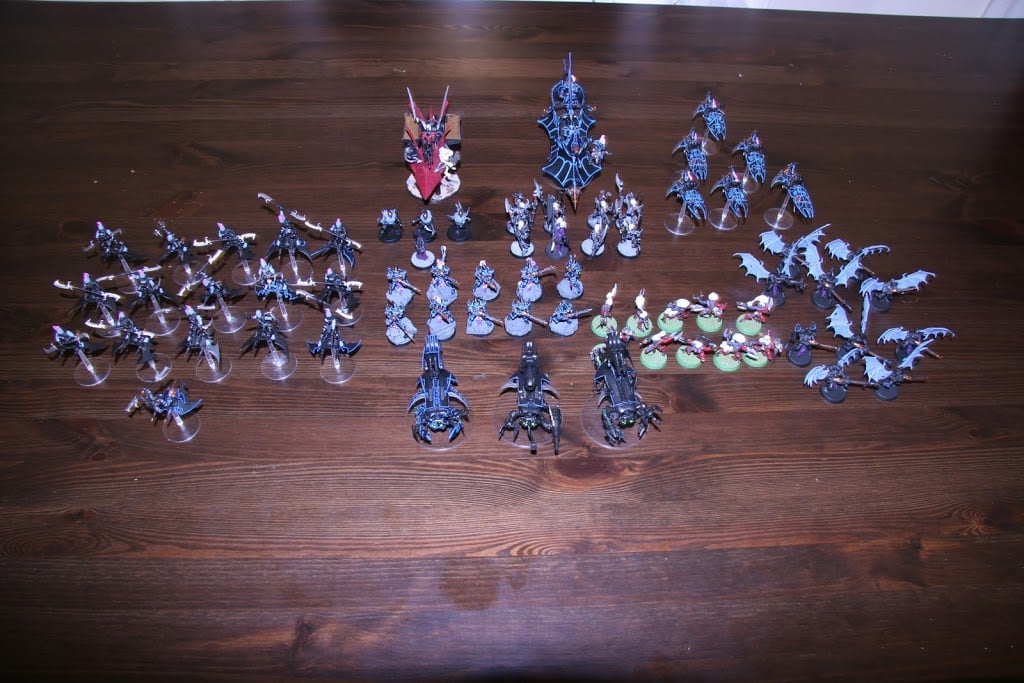