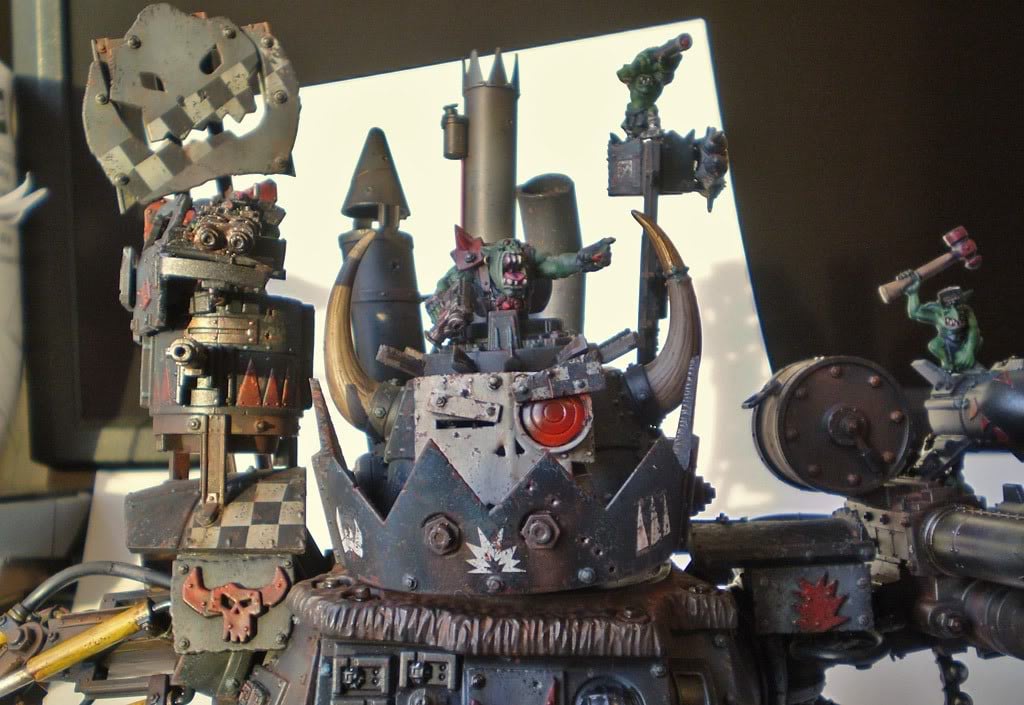 Another Adepticon is down and what can be said besides it was awesome in every which way. I saw old friends, made new friends and even earned good stories myself. The event was successful and can’t wait till next year.

Adepticon made a lot of changes to the structure of the tournament. It will be interesting to see how well it does over the next couple of years and we also learned a lot ourselves for our tournaments and what we could do better in the future. I brought Dark Eldar and was actually very happy on how they performed. I feel like I was within striking distance of being in the top 16, but I made a couple mistakes which made me fall short. Without further ado let’s start from the beginning…

Thursday – Drive with the Goat and his baby bladder

I had Bdub and the Goat stay at my house the night before… after cleaning up, and mass amounts of snoring we woke up at 5:00 am. The Van full of rage pulled up and Jwolf was at our front door yelling at us to get in. I felt like Blue in Old School, only jumping in a van that was fueled on rage instead of mass amounts of drinking – and without pantyhose over our heads. The drive was pretty good overall.

Everyone asks why we do it every year. Why not just fly? At this point its tradition for everyone, and it’s a time we get together and get psyched up for Adepticon. We get to chat about what is going on with everyone’s lives and how everyone is doing. The wives and girlfriends are not around and it’s just the guys. We never get that when we fly. No one feels rushed while we are driving up there. Plus every year is an adventure and you remember it. You usually don’t remember the flight up there unless it’s a bad experience.

I’ll be honest, I wasn’t excited till I actually walked into the Adepticon Hall and got my tournament packet. Something just clicked. For the longest time I was just feeling meh about it all. I think it was mostly from work, as I haven’t had a chance to focus on anything gaming wise, let alone writing for a blog (traveling sucks a lot).

As said, I brought my Dark Eldar. List is as follows:

Game 1
I drew a Space Wolf player, who brought a 13th Warrior list that was a lot of fun to play. The player, Erik, flew all the way from Hawaii. I understood why he brought such a small army! How else are you going to fit anything big while flying for 14 hours? Game went well for me as I won. Njal and his Tempest Wrath powers were quite annoying. The -1 BS made it hard for me to actually hit and Tempest Wrath made me immobilize two of my vehicles while I was trying to close for the Assault. Njal’s random powers popping up every turn can be very tough because you can’t gauge on powers that are going to come up. Such as every 18″ you have to take a moral check and flee when it comes time for assault. That one hurts! Overall, I advance to the next round only to find a common face…

Game 2
BushidoRedPanda
I remember this very well as I just had to laugh about the next series of events. I come to the table, waiting to play a new opponent. I see Jay come up and I say: “Hey, looks like we are playing next to each other. Awesome!”
Jay of course says: “Great, hey I am on table 6.” Then it clicks: we are playing each other! Well, looks like it’s another Saturday night game. We play it out like we always do. I end up winning and wiping the Death wing off the board. It was a close game. For the first two turns Jay didn’t fail one save, and I felt like I was going to be stranded out in the wind a couple of times.

Game 3
This is one of my favorite games for sure, and was also one of the toughest. I made a huge mistake. I won the roll to go first and decided to deploy my whole army on the board ready to strike. Mark [my opponent] deploys his Space Wolf list on the board. He has two Razorbacks with lascannons, 15 long fangs and 40 Grey Hunters in Rhinos. I am going have to take out the Rhinos and Razorbacks fast to wipe out the Grey Hunters. I wasn’t too worried about the Grey Hunters because after the first turn most of my army will have done its job – either gotten into position or have broken down enough tanks that I am good to go from there. I get ready to move and Mark seizes on the first turn. Ouch! At this point it’s a big blow. He blows up two Ravagers, knocks down two Raiders, and immobilizes one venom. It’s a huge blow as it limits my mobility, and on top of it my Anti-tank capability. This is where I screwed up, though…

What I should have done was realize the risk of losing first turn and how much would it mean if I lost a majority of my mobility and anti-tank from seize. If I was reserved and even came out piece meal I could have sectioned off parts of his army and probably been okay. I made this mistake and it cost me the game. The game was still close and I could have pulled it out, but the Baron whiffing on the Long Fang squad for 3 turns didn’t help. I just couldn’t convert on killing the Rhinos in Melee with Furious Charge Incubi. Mark played great and it was a tough game. It was hilarious to see his face when he charged 15 Hellions and the Baron with 30 Grey Hunters then lose combat and be forced to watch my Hellions Hit and Run towards his Long Fang base.

Game 4
I played Shaun “Old Man Kempf”
Shaun was one of my team mates for the ETC last year and we are playing together again. We decided to turn it into a practice game and just started drinking. We both tried to push the limits of our armies to feel what they could and couldn’t do. One of the highlights of that game was still assaulting 90 Orks with Hellions, Baron, and Incubi, and killing close to 60 of them in assault. I shouldn’t have engaged Ghaz to allow more Powerclaw attacks, but was fun for sure. Have to be careful around Orks as Dark Eldar just doesn’t have the survivability to grind people out in combat.

I drove to Wisconsin and hung out with Family. I haven’t seen my father in 3 years, or my Uncle for 15 years. It was great to see them both. We have always talked, but with business and travel we are never at one spot together. Gladiator is up, and to make this short I got all the way to the last table. I played some great people – especially Jamie Thatcher with a strong marine army. Though, the highlight of the Gladiator for me was top table fight I had against a Stompa Giga.

I got the chance to play someone who has always been a great player, and is always hovering around the top. He is only 18 years old, and has a good chance of being one of the top contenders – just like Tony who won Adepticon. Oddly enough his name is also Tony. He was playing a Stompa army that has an Item called the GigaBlaster. I won the roll to go first, and I needed to take out the Stompa as fast as possible. I had a good chance with enough haywire blasters and 20 Dark Lance shots. Sadly, this didn’t happen. I missed with all my shots on the first turn, and didn’t even scratch the paint on the Stompa. What happened next was unbelievable and you just had to laugh about it.

Gigablaster
Shots: 2d6 Str:7 Ap:4
Special Rule: Can jump to another target and keep on going. It only runs out of ammo when you roll doubles on the dice.

Tony turns on the Gigablaster. He waded through my army, literally rolled over 45 times, and just destroyed my army. First turn: the Stompa killed three Venoms, two Ravagers, Voidraven, Two raiders, 5 Scourges and some warriors. After that it was pretty much downhill. I lost all my anti- Tank, and tried to play another turn and moved my Hellions to Assault his 120 Orks only to fail a Dangerous check twice. Then I failed my Shadow field save before getting into combat. After that Tony deserved the win as he monkey stomped me into nothing.

That being said BE VERY AFRAID OF THE GIGABLASTER!!

So that’s the story of Darkwynn’s grand Adepticon 2011 adventure – minus the 18 hour drive back to Austin that involved us turning Brent to the Darkside, Goatboy almost peeing in a Gatorade bottle, and breaking the Grey Knight codex wide open.  But that’s a story for another day…