I feel I have been recently plagued by the much hated bad dice syndrome. I know it’s not a good idea to blame the dice for your losses but sometimes what else can you say?

For example yesterday versus mech Blood Angels my Archon failed his first shadowfield save and my Wyches were pinned when spilling out of their wrecked Raider after a lucky Whirlwind barrage scattered on top of it with the hole just barely over the skimmer. Both of these bad rolls happened during the first turn and it just got me really down. Then on top of it all the next turn I poured every lance I had into a Landspeeder but could only manage to immobilize it… The Landspeeder was lined up for a shot with it’s heavy flamer on my pinned Wyches… By some amazing luck my opponent rolled a bunch of 1s to wound them and I only lost two Wyches… Then another barrage from the Whirlwind scattered back 11″ on top of the Wyches… After the smoke clears I’m left with only the Hekatrix. What a way to start a game. The first game was even worse, much worse – don’t even wanna talk about it.  :'(( Oh well what can you do?

Re-examine your army list
I have had some time to think about it and looking back at the two games yesterday I can definitely see some ways to improve my current 1500 point Dark Eldar list. The changes I’m thinking about aren’t huge but I think they will improve the army overall. Unfortunately my squad of Trueborn with shard carbines rolled horribly to hit in their shooting phases both games so I think it’s too early to throw in the towel on them yet… I’ll give them a couple more tries and take it from there. I’m planning to drop one of my heavy supports so I can beef up my Incubi with more bodies… Running the Archon with a small squad as a bodyguard is too much of a risk and I’ve got plenty of lances throughout the rest of my army. I’ll be playing another game tomorrow night so I’ll see how it goes.  :  )

The main point here is if you just blame your losses solely on bad dice you haven’t really learned anything – and every loss is a golden opportunity to learn how to improve – both in how you’ve designed your army list and your tactics. On the other hand if your dice are really rolling poorly then don’t go to the other extreme and completely revamp your army list. Play through the bad dice and try your best to suck it up. I think most of us are happy to roll average and unless you’ve got a really poorly skewed set of dice everything will even out over time.

Keep your head in the game!
I know in the past I’ve had a few other brief stints where my dice just seemed God awfully bad cursed. It happens to everyone at some point in time too. It’s very important not to let bad dice bring you really down – if you start focusing on the dice too much it’ll take you right out of the game – and sometimes you could have probably still drawn or even won.

For example in my second game yesterday losing my Archon’s awesome 2++ save and the pinned Wyches, both occurring in the first turn, pretty much took my mind off of playing to the primary mission objective. I ended up killing a large portion of the Blood Angels army over the course of the game. Towards the end of the game we both had two scoring units left apiece and both of mine were holding objectives. My opponent was only holding one objective and needed to take one of mine for the win. I actually could have drawn or even possibly won the game if I had been more focused. Instead I let the initial couple instances of bad luck funkify my normally competitive gaming attitude and made some really silly mistakes down the stretch because I wasn’t focusing on playing to the primary mission objective. In my mind I lost my two heavy assault units early in the game and decided that was insurmountable. Bad form!

I do want to say my BA opponent is a great guy. He has won most of the games we’ve played but it always a good time and he also has some beautiful armies as well. Losing to someone you enjoy playing can really help to take the sting out of it so keep that in mind. Maybe it’s finally time to buy some new dice…
Some of us are superstitious about our dice. You have some shiny green dice you always roll for armor saves, some bright red dice you roll to hit and wound in assault and some big black dice you roll to penetrate armor… Whatever. Typically your dice roll average which is good enough and sometimes they are just so smoking hot they literally burn holes in the table. Then one day you come to find your dice have gone and lost all their magical mojo… Oh noes!!! They been sucked completely dry of all their good luck it seems… Game after game you keep failing tons of Terminator armor saves. It’s just not fair!

I’m peculiar about my dice so I’ll stick with them through the good times and bad. I’ve collected mine from various gaming clubs, shops and big tournaments – they look really cool and they all have some awesome logo on the six sided pips.

If your dice keep betraying you then maybe it’s time to buy some new dice.  Straight edged dice such as Game Science sells supposedly roll more on average so that means you should roll less 1s with them.

I have found that using a dice tray seems to really help and I’m going to start using mine again. You know exactly how many dice you rolled and there is little to no chance of any ended up cocked. Rolling dice in a tray can really help to speed up the game as well so it might be worth a try for you if you’re really down on your dice. Oh Lord why are my dice always so cursed???
We have all heard a player say this type of phrase and they tend to say it more often than not whenever they lose. The worst case is that schmuck that cries about his bad dice rolls all game long, every roll of the dice, then somehow manages to pull off a win right at the end and probably on his last roll of his rotten dice. Suddenly they are all smiles and telling you stories about just how awesome they are. Not only do you have to listen to them whine all game but then at the end they rub it in your face too. Yuck – don’t be that guy!

The point here is that if your dice are stinking it up like a pile of rotten garbage try not to whine too much about it – it’s just as bad as gloating about a win. Sure when you roll triple 1s for your Bear Lord in runic armor saves versus three lucky wounds from a squad of fleeing guardsmen lasguns you’re going to say something – it just human nature and there is nothing wrong with that at all. To be a good sport though means you don’t constantly whine about how bad are your dice or how awesome are your opponent’s dice throughout an entire game. Maybe you’re not having much fun but that doesn’t mean you have to go and ruin it for your opponent as well. If you do, then remember in a tournament it could hurt your sportsmanship score if you’re concerned about that kind of thing. Conclusion
Everyone will at some time experience the bad dice blues. It happens. On average though over time dice rolls will even out. Everyone has different ways of dealing with it. The main thing is to remember it’s mostly just a phase and for every game where your dice stank it up you’ll have another game where they are on fire. Keep your mind focused on the mission objectives and play it through. Often you can still draw and sometimes manage to eek a minor win if you stay positive. It is often said that one of the marks of the great players is their ability to pull victories out from behind bad dice rolling, and I think that is true. Don’t hate your dice as they are simply inanimate objects after all. There’s nothing you can do about lots of poor dice rolls so try not to take it too hard… It will all eventually turn around for you if you stay the course.   😀

So how are your dice rolling for you these days? Tell some your worst bad dice blues horror stories !!!

We can feel your pain bro …

Author: Steve Turner
Steve turner is a competitive Warhammer 40k player and avid hobbyist. He has been actively playing for over 20 years. He began writing for BoLS in 2013.
Advertisement
Editorials Wargames
Advertisement 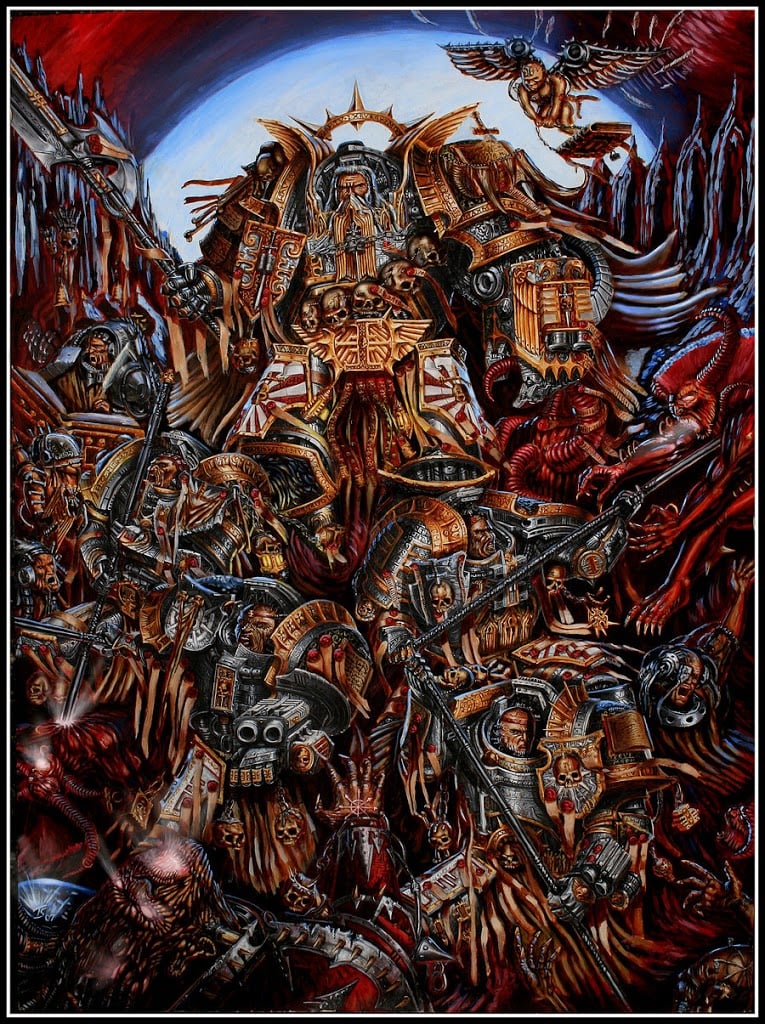