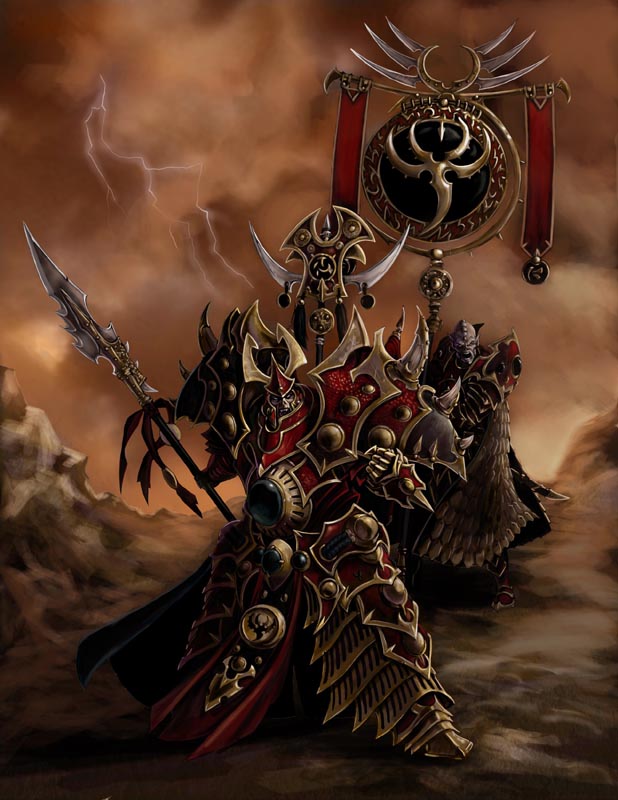 So you’ve decided you’re into these types of things, eh?

Mr. Black here dear readers and today we’re going to talk about starting your own Skorne Empire. Yes, I know, it can look daunting with so many hulking and nasty looking warbeasts and truly some of the most visually stunning troops in the game, but today I’m going to give you a brief rundown of some of my top choices for initial purchases; i.e. the stuff that will really help you get a feel for the faction and raise a truly terrifying force from the ground up!

The Battlebox
I know your initial thought is to run out and grab up the Skorne Battlebox and build from there. After all, why wouldn’t it be? It’s called a starter for a reason! I’ll admit, for just learning the basics it’s not a bad purchase, though I personally question the need for a second Cyclops Savage. But I am a fair man so let’s check out just what you’re getting and how much it would cost separately:

Huh… That’s… Quite a bit of saving actually… And while I still really never use that second Cyclops Savage (and sometimes, barely use the first) it’s basically free. Actually, it’s like it’s free and comes wrapped in a $10 bill… Right then. Never mind anything I say about the Battlebox not being a good deal. It is. Buy it.

Starting From the Ground Up
Ok so we’ve picked up the Battlebox, now what? Let’s take a look at just what we’ve laid our hands on:

Titan Gladiator
The Gladiator is arguably one of the best warbeasts in the entire game, and certainly the most popular (aside from a certain Cyclops Chieftain we’ll get to). Why is that? Well he’s tough as nails, has an above-average Def for his size, has two Open Fists for throwing shenanigans, can Slam for free, and also comes stock with ones of the best animus’ available to us, Rush. Honestly Rush by itself makes him a great buy. Why do I say that? Well being Skorne we have precious few ways to get around the haphazard that lots terrain can create – one of our biggest problems is actually getting to the enemy to smash their face in, and that is where Rush comes in, giving us not only a small movement boost but Pathfinder to boot. It’s a life-saving ability on an already impressive warbeast, play him a few times and you too will understand why he makes it into almost every Skorne list out there!

Cyclops Savage
I will say this right out of the gate: Have fun getting these s.o.b.’s together. Sometimes it can be easy, other times it will be a living nightmare and you’ll be certain they sent you warped parts just to mess with your head. Other than assembly though, how is the Cyclops Savage? Well, sadly, “mediocre” is the first word that comes to my mind. It’s not that he’s bad, it’s just there is little he brings to the table compared to other warbeasts in our roster. Yes, his boost-after-the-face animus is alright, but usually you’d be better off with other abilities, and yes, he hits alright for a light warbeast, but again there are others that hit pretty much the same, if not better, and bring more to the table. So in the end, is he worth fielding? Sure. Don’t get me wrong, I don’t think he’s terrible, and many lists I have created feature him, just don’t get any delusions that he is better than he is- a cheap damage dealer you shouldn’t be afraid to sacrifice.

Master Tormentor Morghoul
If you love warbeasts you’ll love Morghoul. Simply put he makes your already deadly warbeasts even deadlier, thus making him a great choice in lower point games where you’re more likely to be playing Mangled Metal/Tooth and Claw. Of his abilities the one you will probably end of using most is Abuse, which is a simple little buff to a warbeast in exchange for a paltry amount of damage, second would be his nifty little ability to pluck a Fury from a beast- nothing outstanding, but lots of nice little buffs. Combine this with a Feat that basically shuts down your opponent’s core battlegroup for a turn  and you have the makings of a personal favorite as far as Skorne Warlocks go. Be warned, however, if you intent to be troop heavy there are much better choices than the Master Tormentor, who personally enjoys the company of Warbeasts much more than Troop choices.

Building Up
Alright then, so what do we add to this little group to bolster it further? Glad I asked! Let’s take a look at some choice units:

Paingiver Beast Handlers
I cannot stress enough how good this unit is, and I firmly believe that most every Skorne army has no excuse to not include at least one unit of these guys. At two points for a unit of four you’re getting the ability to A. Heal your warbeasts B. Give a warbeast +2 STR and a free Charge/Slam/Trample or C. remove any number of fury from a friendly warbeast. All that for two points, to put a cherry on top they also have Anatomical Precision, so just in case an enemy unit wanders too close they can move up and deal with them. I mean honestly what more can you ask from a two-point unit?! For even more effect combine the +2 STR with Morghoul’s Abuse ability to truly create some scary damage rolls! I will reiterate what I said before just once more: you have no excuse not owning at least one unit of these models!

Basilisk Drake/Krea
This one can be seen as a matter of preference, but I honestly like the little lizard combo that Privateer Press gave us in these two. First let me mention that the Drake has one of the most powerful Spray Attacks in the game, and it’s Magical to boot, thus allowing you to plaster those pesky Incorporeal models that may get in your way. Also worth noting it the Drake is a measly four points, well worth it for the attack alone, yet in addition he also has a useful animus, allowing a model in combat to kill whatever it’s fighting then retreat to a safer distance, potentially preventing a counter-charge. Next we have the Krea who honestly looks terrible on paper. So why do I recommend her? Well while the Drake excels at range the enemy will usually try to rush him to avoid getting hit by his Gaze, and unfortunately the little Drake just can’t hold his own against… well most anything… Enter the Krea, bringing to the fight +2 MAT and an extra die of damage to anything near the Drake, meaning her tiny P+S 12 is suddenly a bit more beefy with upwards of 4d6 backing it. Consider some of the damage boosting abilities the Skorne possess and you can see how this may cause a problem for the opponent!

Aptimus Marketh
For the Cryx players out there: He’s a Skarlock Thrall. For everyone else out there: You probably know what a Skarlock Thrall is. If you really don’t then the basic jist is this: He can cast one of your warlock’s spells for free. Not viable in every list but you’d be hard pressed to find someone who can deny the utility benefit of having a three fury or lower spell being cast for free each turn. If you find yourself playing a warlock with lots of decent spells and are having trouble keeping all that lovely Fury to cast them then consider Marketh a try. He’s a bargain at three points and can potentially increase your sphere of influence across the tabletop.

Nihilators
A nice high MAT unit, Fearless, has Tough, decent Strength and Reach, top all that off with Berserk… Oh, wait, top all that off with Berserk… Well it’s a mixed blessing! Basically Berserk allows them to keep making attacks as long as they keep killing models, the drawback being is that it doesn’t differentiate between friend or foe- you run out of enemies to kill? Guess your friend to the left looks good enough, and once he’s dead your buddy to the right would make a fine next target, and so forth. In the end though this is something you can get around with careful unit placement, so just look out for that and you should be good to go. Otherwise the Nihilators are a personal favorite of mine as far as Skorne troopers go; they’re nice and cheap and will seriously mess up anything they run into- just be warned, however, their defense is basically non-existent outside of a one-in-three Tough roll, so just focus on getting them to the enemy as quickly as possible before they get shot to death/trampled over/have a light rain kill them.

Molik Karn is good, we all know this, and if you don’t most any quick search on any Hordes Forum will show this. Do I think he’s broken? No, not especially. Is he very good? You bet your ass he is. Do I feel a lot of Skorne players use him as a crutch? Yes, unfortunately. For an army that has so many possibilities I feel too many players put him on the table and just focus around getting him to the enemies ranks, ignoring the rest of their army. Again, he is a fantastic choice, definitely one of the best in the entire game, but don’t come to rely on him. Doing so only invites in failure.

Bronzeback Titan
The Bronzeback may not be the best recommendation for “newer” Skorne players, as he actually does require a bit of tactics to use. Basically when looking at him he’s a ramped up Gladiator Titan with some extra abilities thrown in, but don’t be fooled into thinking he functions the same as the aforementioned Gladiator, oh no, abilities like Counter Charge, Hyper Aggressive, and Train Wreck make the tactical possibilities the Bronzeback present almost limitless… Well, ok, most of that “limitless” comes from varying forms of “HULK SMASH!”, but it will take some getting used to. Again, one of the best warbeasts in the entire game (Skorne just loves the best, doesn’t it?), but this guy will take some thinking to use. As I said, there are better “beginner” choices out there for units/warbeasts, but eventually you will want to pick this guy up, if even just to yell “HULK SMASH!” just once.

~And there you have it, dear readers, just some of my insight into what I believe are great base-units to begin building your very own Skorne Empire off of… Well, those units and slaves… Lots and lots of slaves… What are some of your favorite units in the Skorne army?