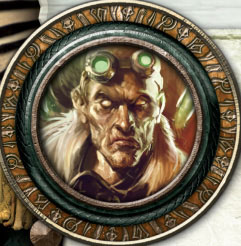 A few months ago Bigred was kind enough to send me a Dr. Arkadius blister in exchange for the continually superb work that I do here at Bell of Lost Souls.

As a Minion player who has been collecting and building both Blindwater and Thornfall armies, my purchase scheme for the months of August through February was fairly robust, often requiring me to make hard choices between working towards one army or the other. As the rules for both armies trickled out, my preference shifted more to the Blindwater Congregation for their superb mainline unit, two very different warlocks, great warbeasts, and great access to solos like the Totem Hunter.

When Arkadius’s rules were released, I hesitated for awhile to pick him up for one very important reason: his demand for a high volume of heavy warbeasts in his battlegroup. Since the only available heavy warbeast to the Alliance was the War Hog, I was a little apprehensive to start investing in that stock for a few reasons.

The Thornfall Alliance is a brand new pact, one that will most likely be getting more warbeasts in Hordes: Domination, which is scheduled to release later this year. The prospect of buying more than a pair of War Hogs struck as a little disconcerting simply because there will be more farrow beasts coming out soon, most likely this year as a part of Domination. I already had two War Hogs, and a third at $45 a pop didn’t resonate in a particularly pleasing manner. Once they get a second heavy, I’m rather under the impression that I won’t be fielding as many War Hogs, and I don’t like investing in a product that sits on the shelf for 50 weeks out of the year. However, when Arkadius arrived on my door step thanks to BoLS head chief, Bigred, I felt required to swallow my pride, open my wallet, and pick up third Hog.

Now that I met what I considered to be the minimum technical standards for running Arkadius, it was time to give the good doctor some table love.  Here’s what I discovered:

Success with Arkadius usually is derived from two things: attrition and your opponent’s reaction rather than your own tactical application. When the bulk of your army consists of 7-point War Hogs (as you absolutely must always run his theme list), you’ll need to play a very careful game concerning attrition.  Taking the best possible advantage of Aggravator and Psychosurgery requires that your War Hogs are all incurring small amounts of damage. At ARM 18 without any available ARM buffs, big damage is going to be bad news for your War Hogs, so throwing one of them out there will most often result in it being destroyed. Throwing your War Hogs up front en masse isn’t necessarily a good idea either depending on your opponent’s army composition.

In my first game with Arkadius, I ran against a 35-point Protectorate army that had a full Bastion unit, the Avatar, and the Scourge of Heresy backed up by a Choir, a pair of Vassals, and the Covenant.  His Bastions and two ‘jacks with Battle Hymn would all easily destroy my War Hogs in a single turn without much problem. This meant that I had to play an attrition game using my single unit of Brigands to run interference while my Hogs moved up behind. Consequently, I didn’t get much use out of Aggravator or Psychosurgery.

I’ve found his feat often a bit difficult to take advantage of as well. Without being able to easily direct your frenzies, you can run the risk of suffering damage on your end just as easily as your opponent might. I can certainly see it being quite useful as an assassination tool, but my opponents have been savvy enough to keep their distance. Again, we’re looking at another ability that is pretty conditional.

Crippling Grasp and Forced Evolution are two very good spells. Crippling Grasp has always been fantastic, but taking advantage of it will often be difficult due to not having any means of channeling.  Craft Talisman from the Bone Grinders certainly helps, but Arkadius is awfully fragile. Hopefully we’ll see a new addition to the Alliance with Shield Guard to help make using Crippling Grasp a bit more viable and less of a risk. If you can manage to throw it up, it actually makes the Brigands pretty strong at range, effectively boosting them up to RAT 7, POW 14. With Forced Evolution, your beasts become a little harder to hit, making them a pain in the butt for anything MAT 6 or below, while also giving them more hitting power. It goes great on either your Hogs or Brine, notably making Brine great for alpha-striking from 13.5″ away.

His melee weapon is probably worth mentioning as well. In one of my latest games, Arkadius made an entire unit of Bastions effectively destroy themselves, which was good for a laugh all by itself.

That basic analysis out of the way, I think Arkadius is interesting, but not without a big flaw; his effectiveness is going to be extremely conditional on your opponent’s build and execution. Without ARM buffs, you’re relying on your opponent to spread their damage around instead of focusing on a single warbeast. Unfortunately, most players with half a brain will know to focus fire after a quick look at your cards. The only real recourse you have against this is to alpha strike and hope that you do enough damage in the right places to stop your opponent from crushing you too hard. This requires using the Diversionary Tactic power slide with Brine benefiting from Forced Evolution while hopefully attacking a target with Crippling Grasp while the rest of your Hogs run into base contact with the enemy heavies and smack them around with Arkadius’s feat. Weapon Masters will simply have to be shut down by jamming them with Tough Brigands or a Crippling Grasp if you can manage it. If your Hogs can’t finish a target, throw out a boosted Primal Shock on their target to see if that does it.

The unfortunate thing here is that Carver acts in much the same way as Arkadius, but he doesn’t suffer from the same conditional requirements – he merely needs to cast Batten Down the Hatches and Mobility while upkeeping Quagmire, and he’s good to go. However, that strategy also makes Carver relatively one-dimensional to play, and not terribly exciting on the tabletop.

As of the moment, here’s the 35-point list that I’m running with Arkadius:

How does the good doctor fair by you?

Author: relasine
Relasine is a veteran tabletop wargamer with over 10 years of experience. His specialty is Privateer Press' Warmachine & Hordes gamesystem. He began writing for BoLS in 2010.
Advertisement
Warmachine-Hordes
Advertisement

WARMACHINE: Making the Most of Your Trollkin Sluggers