This the Protectorate’s low-cost defensive unit. With Set Defense for an effective DEF 15 against charges and Shield Wall for an effective ARM 17, the Temple Flameguard are a great unit for soaking up fire as you move the rest of your forces into position to deal a crushing blow on the following turn.  While ARM 17 isn’t terribly impressive, it’s usually enough to dissuade your opponent from trying to put a flurry of POW 10s into them.  In terms of offensive output, the Temple Flameguard are armed with POW 10 Reach weapons and CMA, giving them flexibility in determining their targets. They are able to deliver individual MAT 6, POW 10 attacks, paired MAT 8, POW 12 attacks, or larger CMAs scaling all the way up to MAT 16, POW 20. With SPD 6 and Reach, they have an 11″ threat with their Flame Spears when charging, giving them some pretty respectable threat range. The Protectorate has a host of great buffs for your Flameguard, from Defender’s Ward, Inviolable Resolve, or Holy Ward to increase survivability to Ignite or Guided Hand to increase offensive capability, to Crusader’s Call to increase threat range. Thanks to their low cost, they make great companions to the High Reclaimer as soul batteries. This UA brings a lot of help to the Temple Flameguard, adding the Fire Continuous Effect to the unit’s Flame Spears, Terror, and Ranked Attack to make line of sight less of a challenge. It also brings Iron Zeal for a single round ARM buff in addition to immunity to knock down and stationary. Menoth’s Howl and Ranked Attack make the Flameguard even better at dispatching infantry.  Iron Zeal can be used either to allow the unit to run or charge while still getting the benefit of Shield Wall (even if they aren’t in base contact with other Flameguard models), or advance and Shield Wall to crank their ARM up to 21.  Considering the unit’s rather low base CMD value, CMD 9 on the Officer and the Unit Standard make the unit pretty stubborn.  For two points, it’s a fantastic addition.

Where the Flameguard are defensive generalists, the Cleansers are markedly more offensive. With their SP 8, POW 12, Fire-causing Purifiers, Cleansers aim to take on hordes of enemy infantry. While their RAT value of 5 is at the mediocre end, the volume of attacks generated by their spray templates will often make up for it.  Their immunity to fire also gives the unit some flexibility with template placement, allowing your sprays to overlap models in the unit without fear of friendly fire while also ignoring the penalty for firing into melee thanks to the rules on sprays. If some of your Cleaners up front get engaged, use your own templates to free them up without having to risk a freestrike if you can clean off the offender. When going after a high-ARM unit benefiting from Shield Wall, the Incinerate Order is your friend, giving a direct hit from POW 14 all the way up to 22 and blast damage at POW 8 up to POW 16 depending on the volume of models participating. Since the AOE remains in play, you also have a nice denial ability there. In terms of buffs, there are a few important accuracy boosts that are helpful to this unit, namely Kreoss’s Menoth’s Wrath or Severius’s Eye of Menoth. The Testament’s Revive spell can be a really mean way to line up an aimed shot with ideal placement.

The Cleanser Unit Attachment gives a few more options to the unit, granting Bushwhack for added placement flexibility, a once-per-game ability to sacrifice 2 POW for an extra 2″ of range on their sprays, and a special action on the Officer itself allowing it to place a wall within 5″ that acts in the same manner as Feora’s Wall of Flame spell. While Bushwhack is largely situational, access to a 10″ spray on an infantry unit is pretty brutal. Even though the unit does have to give up overall damage output, the Fire Continuous Effect more than makes up for it. A wall that is 4″ long that automatically causes a POW 12 in addition to the Fire CE is a great defensive feature. This can be brutal to both single-wound and multi-wound infantry alike since most multi-wound models gain their high-ARM from effects like Shield Wall or Defensive Line. If you use this ability in addition to Feora’s Wall of Flame spell, you can effectively block off a large portion of the board from advancing infantry hordes, making the Cleanser Officer a fantastic addition to a Feora army.

Daughters of the Flame

This is your fast-moving unit for tying up the enemy and making pinpoint strikes. They have an impressive SPD stat of 7, DEF 15, and a pair of P+S 9 attacks. While MAT 6 leaves something to be desired, the addition of CMA and two base attacks makes up for this a bit. Acrobatic makes the unit great for cutting through your enemy lines to get to fragile and important support models like unit officers, ‘jack marshals, etc. For five points, the Daughters are a fantastic jamming unit thanks to DEF 15, a rather low cost, and Acrobatic.  If you can support the unit with a defensive buff like Defender’s Ward, Holy Ward, or Ashen Veil, the unit approaches brutally high DEF levels.  With a well-placed offensive buff, the Daughters can actually get pretty strong in melee as well.  With Ignite and paired Combined Melee Attacks, Daughters hit at an impressive effective MAT 8, P+S 13.

Keep an eye out for the upcoming Protectorate warcaster Thyra, Flame of Sorrow due to release in June.  Hopefully she’ll bring some good synergy with the Daughters!

Author: relasine
Relasine is a veteran tabletop wargamer with over 10 years of experience. His specialty is Privateer Press' Warmachine & Hordes gamesystem. He began writing for BoLS in 2010.
Advertisement
Menoth Warmachine-Hordes
Advertisement 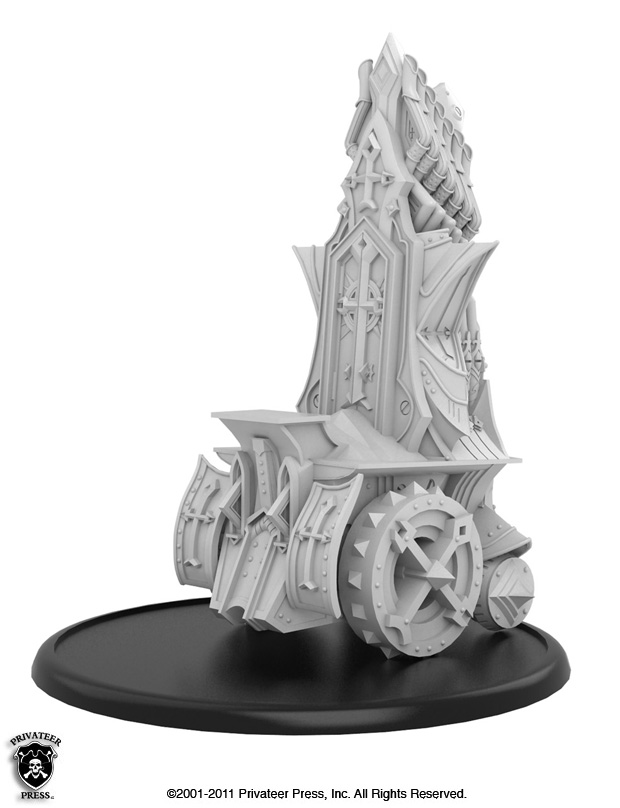