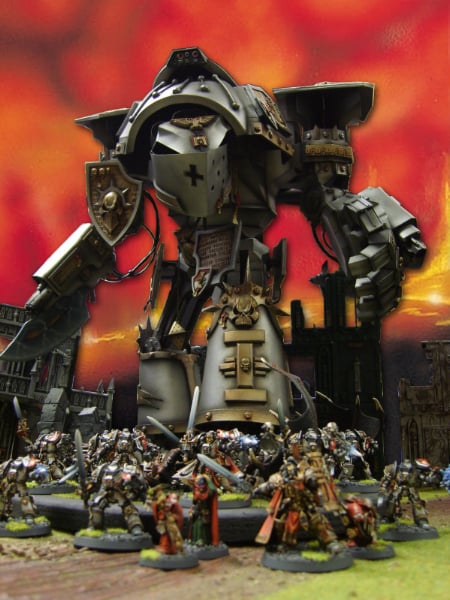 The second part of the Grey Knights codex review, the first part, which was the HQ review can be found here

Well, what can I say? A normal Techmarine with Grey Knight abilities. Psychic power is resconstruction, which allows re-roll when repairing vehicles. Can take normal Grey Knight wargear. Nothing fancy here.

The elite of the elite are here to kick ass and chew bubblegum, but they’re all out of gum. Purifiers are basically veteran Grey Knights that have exactly the same profile… except two attacks base, which you’d expect. The wargear they come with are the same options as the normal Grey Knights, but at slightly discounted costs. You can take a incinerator and psilencer for free, and psycannon for 10 points; note: for every five models two may replace their existing wargear for those I have mentioned. Personally, if I was going to go with anything I’d go incinerators because the Purifiers with that extra attack are all about combat. What makes them more combative is their psychic power; cleansing flame. Cleansing flame will score a wound on every model in the assault before blows are struck on a 4+. These also count to combat resolution, so very handy for dealing with hordes, elite units, and pesky Eldar.

The rule here is the same for all Grey Knights squads using the brotherhood of psykers rule – and that is: don’t upgrade the Justicar or Knight of Flame. The reason being: psychic tests are done on those models and if they fail any upgrades are taken with them – bye bye psycannon, etc. So keep each unit cheap and only upgrade the models required. Speaking of upgrades… give the Purifiers nemesis falchions. They get 2 attack bases plus one for the Falchions plus one because of their two close combat weapons plus one for charging, which is a total of 5 attacks each. Throw in cleansing flame to take out hordes or hammerhand for S5 goodness and you’re laughing.

Same as all the other codexes except it has reinforced aegis which is very cool, any psykers within 12″ take -1 on their leadership when doing psychic tests. Unique psychic power for this unit is fortitude, which ignores crew stunned and shaken results. The rest is the same.

The problem with Paladins is they will still go down like normal Terminators as they have 5+ invulnerable. The 4+ invulnerable from the nemesis sword only works in close combat. So plasma, etc will still be going for them and taking them out pretty easily. Due to this I’d say the Apothercary isn’t required. You play wound allocation games by giving each Paladin a seperate weapon – so incinerator, daemon hammer, halberd, warding stave, etc will create a expensive and diverse unit. Definately no where near as big and scary as the rumors circulated.

I’ll go over the Assassins together as there is four of them in total, and it’s the wargear each temple receives that sets them apart. All of them have the same profile and come with some wargear called synskin that gives feel no pain on a 6+. They all have 4+ invulnerable save

Callidus – Callidus is the same from the previous codex. Has a c’tan phase blade [which is now a power weapon], a neural shredder that works as before, and the polymorphine disguise. The way polymorphine works is the assassin arrives from reserve and causes D6 S4 AP2 hits on a enemy unit, the assassins is placed 3″ away using the deep strike rules but doesn’t scatter. While that’s all cool I can see the Callidus being a gimmick unit causing some mild damage and then next turn being shot to pieces or assaulted.

Culexus – Comes with an animus speculum which basically an assault 2 pistol S5 AP1 and for every psyker within 12″ it gains +1 attack. If anyone wants to shoot at Mr. Culexus the unit needs to pass a leadership on 3D6 – vehicles are counted as leadership 10. If that test is failed the enemy unit cannot shoot at the Culexus – keeping him alive that bit longer, though it should be noted it can shoot at another enemy model.

Eversor – Basically this guy is a WS8 Khorne Berzerker in carapace armor. He gets D6 extra attacks, so could be 10 in total as the Assassins are 4 attacks base, which isn’t too shabby. Add in the neuro gauntlets, which count as lightning claws, and this guy is re-rolling to wound… oh, did I say he has furious charge? Add in a funky poison pistol which wounds on a 2+ and is AP2.

Vindicare – The Vindicare is all about shooting. This guys sniper rifle is pretty awesome thanks to the cool special rules. The sniper rifle is a normal sniper rifle, but with AP1 though thanks to the deadshot special rule – the owning player can allocate the Vindicares shots. Sprinkle on top of that the turbo penetrator rule which inflicts two wounds on a model amongst other things. You see that Librarian over there hiding in a unit who keeps nullifying your powers? Well not any more, boom two wounds thanks to turbo penetrator and AP1, good bye.

Arco – Flagellant – I really like the models of these but they’re still no good! S5 is good; T3 is bad; I3 could be better; 4 attacks is ok; no save with feel no pain isn’t that good. They don’t even get rending or furious charge thanks to the drugs pumping in their little heads. To add insult they’re 15 points per model too! Wha?

Banisher –  The Banisher is basically a Guardsmen with a eviscerator, and makes all Daemons within 6″ re-roll invulnerable saves; like a mini nullzone, but Daemons only. Same points cost as an Arco and you have to pay a extra 30 points for the eviserator!!

Crusader – Guardsmen with a power weapon and storm shield… same point cost as others.

Daemonhost – A possessed Space Marine Scout, basically. Daemonic power sounds cool, but you have to roll for it – so like a box of chocolates you just don’t know what you’re going to get. All the powers are useful, but one makes the Daemonhost S6 and if you don’t get that roll and the only target is a tank then you’re stuffed.

Death Cult Assassin –  A weak pale Assassins with two power weapons. Not a bad S4, and will get 4 attacks on the charge and WS5 which isn’t too shabby.

Jokaero Weaponsmith – Ah, the space monkey that will become everyone’s new best friend. The monkey is pretty weak stat wise, and only has a 5+ invulnerable to keep himself alive but don’t worry about that. The monkey is a force multiplier. What the monkey can do is all down to the dice, you just don’t want to see 1! The Jokaero can give 12″ extra to weapons and 24″ range meltaguns? Yes, why thankyou my orange friend. +1 armour save? That will do nicely. Rending? Why not? Fancy a 5+ invulnerable? Probably not if you’re shooting, so who cares. Or get a 6+ roll twice on the table and get both upgrades. It should be noted that you have multiple Weaponsmiths then it is +1 for each one of the table. Oh, you fancy a ape Obliterator? Well you’ve got one as the Jokaero has a selection of  heavy flamer, lascannon and mutli melta.

Mystic – Basically a 10 point teleporter homer. This is very handy if you’re doing a deep strike list. If I remember right there is only one or two ways to stop units scattering. Mystic obviously has to be on the table for this to work 😉

Psyker – Same as Sanctioned Psyker from the Imperial Guard codex more or less, except you get +1 strength for each Psyker in the squad and AP improves for each additional Psyker too… I would presume this means -1.

Warrior Acolyte – A Guardsmen who has a selection of common wargear, basically everything you’d expect from the Guard codex. I think I will take four of these for just over fifty points and bang them in a Chimera, add a monkey too and pray you get the additional 12″ and you’re rocking.

There’s a lot of elites in the Grey Knights and most of them aren’t Grey Knights! Some are cool some are not.

I can see the Purifiers being very handy in combat if you don’t fancy Terminators or Paladins. They’re only good for munching normal troops, so don’t expect them to hold against dedicated assault units. Sure you could throw on halberds so they get I6, but they cannot take a punch. I have been looking at two squads of these with a Xenos Inquisitor that is a psyker with rad grenades. Purifiers cast cleansing flame against the enemy model Inquisitor lowers the toughness thanks to rad grenades and casts hammerhand making the entire unit S5, goody. Throw in falchions and you’re kicking butt. I can see these being used a lot.

Paladins to me are just two wound Terminators, that’s it. If you fancy Terminators in your army and don’t want them as troops these are your option, but you will pay through the nose for them. Probably best to take them in a unit of 3-4, mix and match the wargear, and throw them with a Librarian who is mastery psyker level 3. Cast hammerhand, might of titan and quicksilver for S6 I10 attacks. Keep the force swords for 4+ invulnerable as it can save your bacon.

Some of the Assassins are cool but not all of them. I can see the Culexus being a suicide anti tank unit while the Vindicare takes out those enemy psykers. They are expensive – being about 140 points per model – but you pay for what you get.

The Henchmen unit is mostly rubbish. Jokaero I can see being in lots of armies, but for me it’s luck of the dice. The Jokaero isn’t like a Ymgarl Genestealer where you pick what you want to use, so you need to hope the dice is on your side. For a example a 5+ invulnerable save isn’t that handy when you’re inside a transport. Mystic will be very handy, and is cheap for deep strike armies. Warrior Acolyes can give cheap special weapons, but the BS3 is a slight but off you will need to take several. In fact you can take up to 12, so fill your Chimera with meltas if you like… some of it has to hit 😉

Overall I’d say the Purifers are pretty cool, but be careful with them. Some Assassins will be handy for anti psyker defense. Mystic, Jokaero, and Warriors will more than likely make up the Henchman bands only.

What are you thoughts on the Grey Knights elite choices? Love them or loathe them let me hear your comments.

Goatboy's 40k Thoughts - What I am doing for the Hobby? 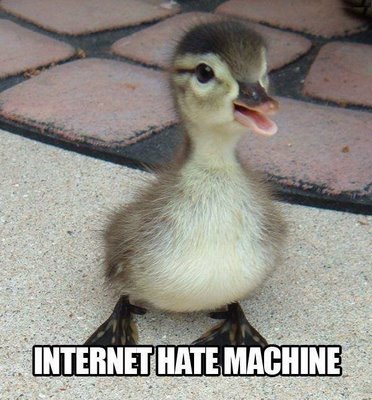