Fritz here with an interesting question: Are Tyranids the new Eldar?

I ask that because to play Eldar correctly everything has to be just right and put into place. Farseers support your shooting elements by casting guide, they improve the hitting power of your assault units by throwing down doom, etc. Take a quick look through the Tyranid codex and we see many similar units- Hive Tyrants, Venomthropes Tervigons, etc.

Certain units buffing and supporting other units is nothing new in 40K, but there is a huge difference between the way Space Marines do it, and what most of us are familiar with, and the way xenos accomplish it.

A perfect example is a Space Marine chaplain or BA priest joining a unit of Terminators to give them furious charge, to-hit rerolls, and feel no pain- fairly localized or in small unit bubbles on the tabletop. With Tyranids that buff synapse can be, should be, and will be by the end of this article, mandatory for using the army effectively, or understanding how to defeat it depending on your side of the table.

This is one of the hidden learning curves with Tyranids for the simple reason no other army in the game currently has a buff web like them, and for the very fact that it is “invisible” on the table- which is both good and bad.

From the players perspective it takes some time getting used to “seeing” and keeping your units in range and cohesion with each other, while from the POV of an opponent it is often hard to see and comprehend the overlapping bubbles that certain unit offer other units. ‘Nid players – use this to your advantage!

Let’s start off by looking at two key units and how they can impact your army- Venomthropes and Tervigons, the first because nobody really plays them, and the second because everybody plays them.

Venomthropes are one of the hidden gems in the ‘nid codex, and in the race to compete against mech the popular trend is to spam out Hiveguard. In doing this you might be missing out on a unit that when leveraged properly will “kill” far more than those barbed toothpicks will. Although in truth this is also a HUGE design flaw in the Tyranid codex, where so many (read all) of the critical units needed to compete in 5th are conveniently located in the elite slot with no way to manipulate or change the force org chart via HQ choices (which = a major fail for the POV of codex design).

From a stat perspective the Venomthrope is rather ho-hum with no ranged attacks, T4, 2W, and only two base attacks, but with these space bugs it is more of the unseen which makes up for those stats. Each model blankets out a spore cloud which has three unique effects handed out to any units/models within 6”- a 5+ cover save from shooting attacks, defensive grenades when charged, and dangerous terrain tests to the models that charge. Don’t look at those abilities as being stacked on the Venomthropes (even thought they are), but look at them army wide…

So you are running a few MC’s and while the models are sculpted fantastically and look amazing, getting cover saves on them is next to impossible thanks to their size and height. Sure they have a high toughness but since Tyranids don’t have “tanks” and everybody is geared up to fight tanks where do you think those 15+ krak missiles are going to be aimed at each turn. S8 blasts through T6 like nothing and negates the 3+ save that most MC’s have.

Stick some Venomthropes behind them and now you have a 5+, which while only 33% is better than nothing, and in a moment we are going to stack things even more in our favor…

Tyranids are also an army that likes to get the charge off using adrenal glands and getting that extra attack in the assault, but again, since we don’t have assault vehicles like Land Raiders it is sometimes hard to control the distance to get that charge off.

With a group of Venoms strategically placed all isn’t lost if you don’t get that charge off, and in some instances you don’t want to get the charge. Keeping your bigger models like Trygons and Carnifexes in that Venom bubble means if they get charged your opponent does not get the bonus attack for charging (defensive grenades) and your opponent has to take a dangerous terrain test for each model with no armor saves in allowed. For most units that is a 1 in 6 chance of losing a model, pretty good odds.

Good stuff for a floating squid model, but it gets better in a moment once we stack Tervigons on top of them…

Tervigons: The most popular must-have model for Tyranids that GW doesn’t make a model for, most Imperial players know it as the bug that poops out other bugs, and that is a pretty accurate description. Indeed there is a valid Tyranid design philosophy that says one should never pay any points for troops, why buy them when you can breed them?

Spawning Gaunts is on the visible spectrum so let’s take a look at the invisible spectrum of the model, and unfortunately this is going to cost a little more in terms of point investment which isn’t always popular. As a base we want to throw on adrenal glands and poison which means any Gaunts within a 6” bubble now have furious charge, poison, and counter attack. Spawn a big enough group of 10+ and they are a serious (and also FREE!) threat to most infantry, and even high toughness models, often hitting first and re-rolling failed wounds. With multiple Tervigons plopping out multiple broods of Gaunts this can quickly become a problem for your opponent.

But we still have one more layer to throw out before we all bring it together.

Taking Catalyst on the Tervigon allows it to hand out feel no pain like candy to another model which often have Trygons, Carnifexes, and Gaunts as the prime targets which leads back to combining Venomthropes with FNP Tervigons.

So I’m eating a dozen or so missiles a turn, let’s say 15 or so. How many are going to hit? Then take a few off that fail to wound as everybody rolls “1”’s from time to time. Grab the remaining wound pool and then take your 5+ cover saves from the Venomthropes and finally on the remaining that get through take those FNP saves. Layer this over multiple Trygons with 6 wounds each and something is making it in to the back ranks.

From a Gaunt perspective when you need to tarpit certain units, throwing up FNP on the Gaunts pretty much means they will get stuck in and bog things down. Again, who cares, because you’ll just spawn up a replacement unit.

In the upper center I have a Trygon charging a group of terminators who will get slaughtered since I’m attacking at I5 with seven attacks that I get to re-roll and wound on a 2+ thanks to talons and adrenal glands and their 5+ invul save. Of course then I’m open to a counter attack from the terminators from the land raider, but am I?

I’ve got the Venomthropes (center) overlapping the Trygon and Tervigon with the cover save, defensive grenades, and dangerous terrain cloud, while the Tervigon is within 6” of the two Gaunt units on the bottom giving them furious charge, poison, and counter attack if needed. Add insult to injury in that the Trygon is in cover and these Terminators don’t have grenades.

Pretty standard Tyranid deployment- Trygons up front as they run down field with Venomthropes backing them for the cover save while a Tervigon throws FNP as needed, Warriors and Prime there to break off and speedbump or tarpit annoying IC’s like Mepheston with lash whips.

Logan and company drowning in a sea of Gaunts, note the Venomthrope hanging nearby just in case they do manage to cut through and assault the Tervigon. Assault with the Tervigon? Why bother when multiple groups of free little buggies can strike first with two attacks against the squad, simo with Logan, and then re-roll failed wounds.
Nom, nom, nom!!! Fritz out. 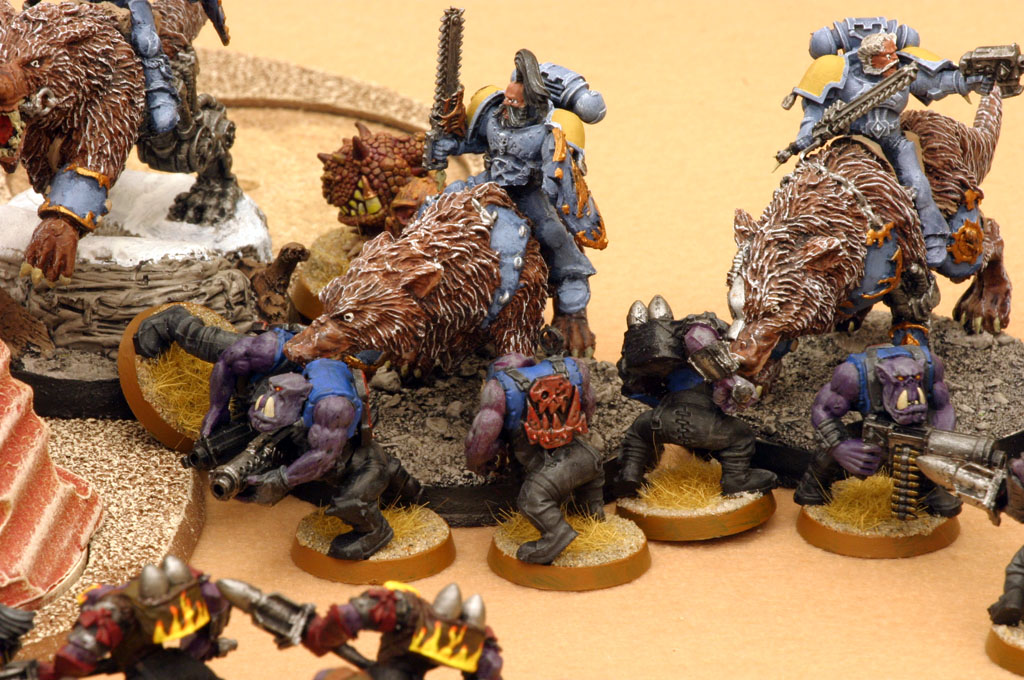