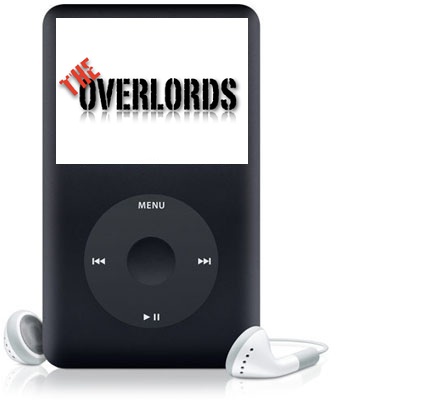 Highlights: After dome jingles the boys open up with some GW, Gamesday, Black Library and Forgeworld news and releases. Next up the guys moved on to some local Overlords news. Next up, the guys talk about their first experience playing the Dark Hersey role-playing game. Next up, the guys go over some of the games that they had played in the last week. Next up in Spur Peter, the crew goes over washes and some tricks to using them. Then in the Meat Locker, Ciaran reviews the Fantasy Flight board game, the Horus Hersey. Lastly, Dean treats us to the long awaited (by me at least) Tyranid segment, where he and Steve go deep into the whole history and story of the Tyranids in the 40K universe.

Opinion: This was an outstanding podcast! Each segment was good, but Dean’s segments about the fluff of 40K is what really hooked me on this podcast in the first place, and he does not disappoint in this episode. I absolutely loved hearing about the history of the Tyranids in 40K. Great work guys, I really enjoyed this one and so will you!

Highlights: This week, Dave opens up the show with some shout outs and some brief news before moving on to the Tournament Report where he and Gary talk in-depth about their day two at the Throne of Skulls! In the next segment we go back to a bit of fun with “The Big Fight” This week the boys pit Lysander versus Ghazghkull in hand-to-hand! In Operation Codex this week the boys review the Tyranid Heavy Support choices. Next up is a new segment called the Rankings Countdown, and each week the guys break down the top 16 UK players and talk about the armies that they are running and their builds. Next up Dave interviewed Gav Jones, the UK’s #1 Ranked player and he talks about his Dark Eldar list.

Opinion: Overall, I am really quickly becoming a big fan of Dave’s show! This was a really good podcast! The tournament coverage was great, and I love the Big Fight! Operation Codex was pretty good although I am not sure a Trygon can get a cover save from a unit of Warriors. The Ranking Countdown was interesting but it sounded like they had a window open and a ton of birds in the audience…lol! And of course it was cool to hear from the #1 ranked player in the UK! Overall, this was a good podcast!

Highlights: This week is jam packed with segments, and it opens up with “This Week in Gaming”. In the next segment Dave is back for 40KUK and do part two of their email segment. Next up, Pat talks to Brandon (aka StillFrosty) about his White Scars army that he took to Adepticon 2011. Up next in “Rules Hersey” they hit on the rules for Independent Characters in the assault phase. Next up Pat interviewed Carl from the Independent Characters and they talked about their outstanding coverage from Adepticon 2011! Pat also updates us on his model being painted by Mike, the Painting Apothecary! Next up are Pat and Ciaran on Short Shrift and they talk about Deathleaper out of the Tyranid Codex. Farseer is back in the CIC and this week he Ryan, and Neil talk about tactics with the Ork Battle Wagon. Next, Neil goes back to cover the Elite and Heavy choices from the TCP Codex Soul Reapers. Lastly, the guys get back to List Building, and this week they build a B-Team Vanilla Space Marine list and a ‘Revised’ Chaos Undivided list.

Opinion: Overall I liked this podcast, I was glad to see the list building segment back as this is by far one of my favorites. All of the talk about the Battle Wagon almost makes we want to run out and buy Orks, and it was good to hear from Carl. Overall, another good podcast guys!

Highlights: This week it is just Dave, Rich and Dan and they open up the show with what they have been doing this week. Dan had some unplanned repairs to his IG army, Dave updates us on his Apollo Moon landing Space Marine project, and Rich talk some Black Library and this moves into a good cannon versus Black Library discussion. In the second segment, Dan and Rich talk about the recreation of a between the Necrons and the Death Corp of Kreig as seen in the book Dead Men Walking. In the last short segment the guys cover a listener email about tactics for hoard armies.

Opinion: The guys were right back on track with this podcast. It was everything I have come to hope for from the guys, a lot of 40K talk, some fluff, some tactics, and a lot of fun. I really enjoyed this podcast and love the show! Great work guys!

Highlights: This week after a bit of fun the boys go over what they have been doing the last two weeks. They follow this up with some GW and Forgeworld news, which including talks about a third Dawn of War video game and the current rumors out there. In their next segment, the guys cover the Space Wolves fluff! They talk about the history of the army, talk about some of the changes that have come to the army, and give a very detailed run down of their story. In the next segment, the guys go deep into the tactics of the Space Wolves codex and cover the tactics you might see most Space Wolf players use. In the last two segments, the guys built lists using the Space Wolf codex and try to reflect several different aspects of the army and move on to some hobby talk about painting and modeling the army.

Opinion: This was a really great podcast. I loved hearing about the fluff of the Space Wolves and the changes that fluff has gone through since their first codex was printed. I’ll have to admit, being a Space Wolves player might have helped out my opinion of this podcast, but of course the guys repeatedly “poo-pooed” my Long Fangs/ Thunderwolf Cav list. But in the end this was by far to most compressive look at the Space Wolves I have heard yet. Awesome podcast guys!

The Power Sword Podcast – Episode 2 ***Explicit Warning*** – Glad to see these guys back, but maybe what was up with the watch talk?