So it’s May and that means the start of the Texas GT season with our trip slightly south to SA (and continuing with the Railhead Rumble next month, and WargamesCon after that).

John Bailey organizes an absolutely awesome event. The missions are almost completely just straight up rulebook affairs, which is perfect in my opinion. Not to mention, it’s held in a beer hall, I obviously had a blast. This is the army I used. Sarat had an interesting Salamander list sporting Vulkan with Assault Terminators (Hammers) in Redeemer, a Sternguard with a couple melta guns, a Dreadnought in a Drop Pod, two Tactical squad in Rhinos (Power Fist, Combi-Melta, Flamer), two Land Speeders, and two Vindicators. I looked over the list and noticed that it was entirely restricted to weapons with range 24″ and less. We ended up with our five objectives spread with one in each quarter and one in the middle. He got first turn and deployed strong in the center while reserving his Tactical squads. I deployed my Assault squads in Rhinos to move onto the close objectives and held the Stormravens in reserve. He surged forward. His Dreadnought came in near my deployment zone, and my seven-man Assault squad got out to charge it. This was enough to tempt Vulkan and his buddies out of their ride. They wrecked the Assault squad, but were stuck sitting in my deployment zone when the Ravens came in. They all died after being charged by all the occupants of both Gunships. Sanguinor ended up being able to charge a Tactical squad Turn 4, but really it was the Stormravens who ended up wreaking havoc. They wrecked a few vehicles and ended up contesting his objectives. 16/20. To say this army was unique would be an understatement. It was comprised of O’Shovah with a five suit retinue w/ various weaponry, an additional Commander, a three man Fireknife, three Stealth suits w/ two marker drones each (drones pictured above), six Fire Warriors w/ two marker drones, ten Fire Warriors w/ carbines in a Devilfish, six gun drones, two Broadsides, and a Skyray. He had a lot of markerlights, which I think is a very smart way to play the army. He even had cool markerlight counters (also seen above), and got a deserved Player’s Choice placing and 2nd Overall. A Spearhead Capture and Control is always a challenging mission, and in retrospect I feel like a made a major mistake in not reserving both my Stormravens, even though I had first turn. I deployed them front and center and surged towards Farsights bodyguard, fully knowing they would be shot down immediately, with three of my Rhino units around my objective in the corner. I figured the Stormravens cargo would eventually march there way to his objective. The Ravens went down and I got the turn two charge on his lines. (The red Dreadnought is actually part of Farsight) One Furioso got a charge on his Stealth team, and wiped them out. The Terminators go down to shooting. It takes Sanguinor and the other Furioso until turn 4 to wipe out the whole Farsight bodyguard, with the Dreadnought going down in the process. Meanwhile, his Devilfish is able to break from his lines towards my objective. Bottom turn 5, Sanguinor is in combat with his foot Fire Warriors contesting his objective, I’m holding mine. We get turn 6. I am unable to disable his Devilfish, and he moves it in for the contest. Game over. Draw. Josh got the secondary for his Gun Drones chilling in the middle of the table. 8/20 David had an absolutely beautiful Iron Warriors army that won Player’s Choice and got 2nd Best Painted. His army consisted of a Daemon Prince w/ Warptime and Wings, a Dreadnought with combat weapons, Kharn the Betrayer with eight Khorne Berserkers w/ a Power Fist, in a Land Raider, three Obilterators, a Defiler (pictured above), and three squads of Chaos Marines with dual special weapons (2 melta, 1 plasma) and a Powerfist in a Rhino. I got first turn and zoomed my Stormravens towards his lines, one going at each end. Sanguinor got a charge off the next turn on his Daemon Prince and killed him with the re-rolls from Avenging Angel. The Terminators and Librarian in the other Stormraven flew to his board edge, over all his tanks, and get shot down. The Assault Terminators charge and kill the Obliterators. They are in turn shot up by his Chaos Marine squads until only one survives (he doesn’t die). My Rhinos catch up to his lines and the Land Raider destroys one and the Berserks charge them and kill them. The Berserkers are then charged by a Furioso, and wiped out barring Kharn. Kharn then proceeds to chop off both the Dreadnoughts arms and legs, then finish him off next turn. The Sanguinor is gunned down. The lone Terminator starts wrecking Rhinos while the remaining Stormraven makes a bother of itself, and my Assault squads get into his Chaos Marines. The Stormraven spectacularly destroys his Defiler, shooting it’s lascannon, multi-melta, and all four Bloodstrikes to do it. I don’t remember the exact count, but I won on Kill Points. 16/20. With such a big crew it is always bound to happen, finally drew one of the locals. And to make it worse, I had to march through thirty Storm Shields to grab his objective. He stole the initiative and immobilized both my Stormravens. Boo. So my guys have to hoof it. Sanguinor kills Belial. So I’ll make it short, I neutralized his contesters (three Land Speeders, a Drop Pod, Scouts), and failed a difficult terrain for an assault move that could have possibly left me with my own Terminators on top of his objective at the end of the game ( his objective is in that crater you can see above). Draw. I get the bonus for an Assault squad in his DZ. Game is done in 45 minutes. And on day two we have three hour rounds. Time for a long lunch. 12/20. Brad had a cool Mech Eldar army that managed to cram in nine tanks. He had a Farseer with Doom, an Autarch on Bike with Reaper Launcher, three units of five Fire Dragons in Wave Serpents, three Jetbikes, five Avengers in a Falcon, five Avengers in a Wave Serpent, two Flame Storm Guardian units in Wave Serpents, and two Fire Prisms (w/o Holos). So I was just completely worn out by this game, and made tons of mistakes left and right. I mark all three Dragon units and one Fire Prism for my objective points. He went all reserves, so I took all three objectives and put my Stormravens near his board edge (again realizing a good chance of their destruction at the hands of the Dragons, but by delivering their cargo they will have done their job). The Dragons take out one. The Terminators and Dreadnoughts kill the Fire Dragons, while Sanguinor hops over and and engages the Jetbikes and kills the Autarch. I then mention to my opponent the idea to skim his still living Wave Serpents over my Dreads and shoot them in the back. He says that he may not have even thought of that. D’oh! (Maneuver seen above). He completely disables both of them. Sanguinor wrecks a Guardian Serpent and kills the occupants. The remaining Stormraven is destroyed by linked Fire Prism. I then make another huge mistake and move off the center objective (flight base seen below) and don’t get back to it. Then Turn 5, remaining Guardian Serpent zooms onto center objective, and other tanks move to contest the other two. Fritz’ed! Game ends. I was playing way too loose on my objectives and put the wrong Assault squads in the wrong places. Thanks for the fun game Brad! 8/20. The final breakdowns haven’t been released yet but I imagine I scored around average on battle points with a 2/1/2, and a little above average on appearance and sportsmanship. All in all a fun tournament where I learned a lot about playing double Stormravens. The Sanguinor killed an enemy HQ every game, and I only played against nice looking armies, which is doubly awesome. Goatboy ended up getting Best Overall, with his new un-goaty army.

Have a good one, hope you enjoyed a fun GT rundown. Monday morning quarterbacking is welcome. 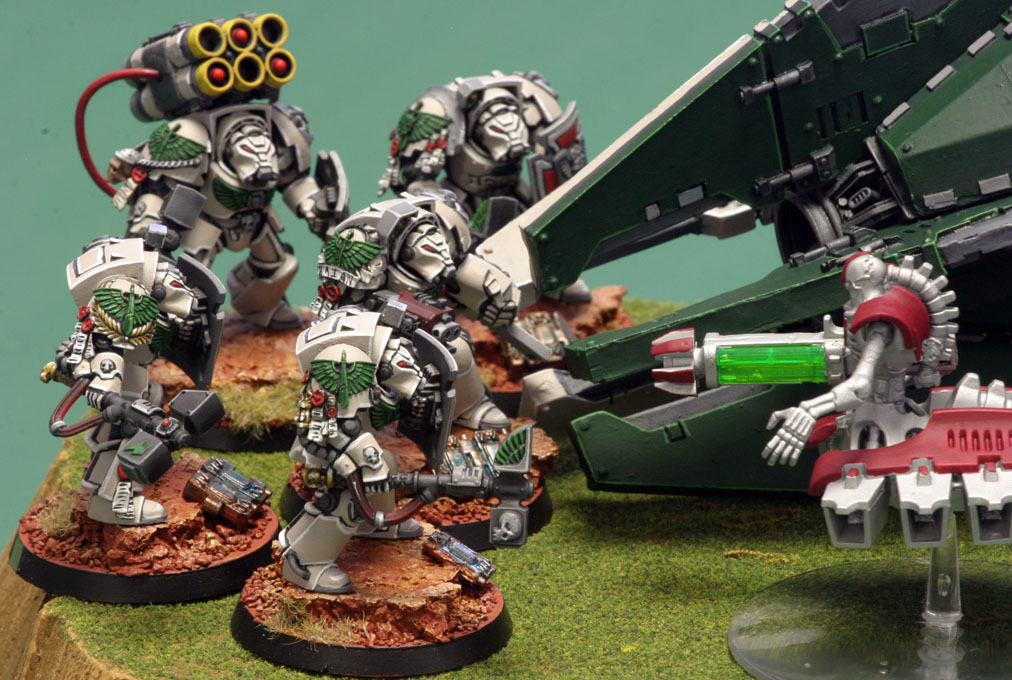