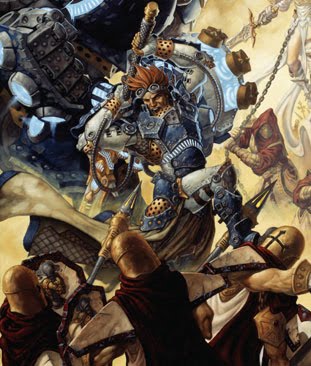 Voices here, with the Second in our Profiles In Badassery series of Warmachine. This time, we’re taking a look at one of the more polarizing men in Western Immoren: Coleman Stryker, warcaster and Lord Commander of the Cygnaran Army.

Coleman Stryker was raised to value service to the Crown and valor as the highest virtues. He enlisted young, showing a remarkable aptitude that brought him into the Royal Guard very swiftly. When the Lion’s Coup began in 594, Stryker initially performed his duty to the Crown, fighting the insurgent forces of Warmaster General Prince Leto. It swiftly became apparent to the teen-aged soldier that righteousness was with the insurgents, and he ended the battle fighting at the side of the Younger, distinguishing himself and earning the respect of the new king. As a reward, Stryker was granted the position he had desired: membership in the elite Stormblades. And it was here, in the quilted undersuit and lacquered armor that he first displayed any magical aptitude at all. The new warcaster was first tutored by the noted Commander Sebastian Nemo, one of Cygnar’s most veteran warcasters. Nemo taught Stryker the arts of magic directly, training a man who could end up being the elder warcaster’s greatest legacy. By the time Stryker was ready for his Journeyman tour he was among the best of the new generation of warcasters Cygnar had.
The man he served his Journeyman tour under was another old-school warcaster named Asheth Magnus, a former loyalist who had requested leniency from the Crown for supporting Vinter. Stryker and Magnus were well-paired as far as their abilities went: Magnus’ style of fighting molded Stryker’s very closely. But Magnus flaunted his position and abused his power in pursuit of enemies of the Crown. After a brutal interrogation and unlawful incarceration, Stryker did his duty to the laws governing acceptable actions by military officers and informed the Generals of Magnus’ actions. Magnus was stripped of rank, and Stryker promoted to Captain. The former mentor was placed under Stryker’s command. During his time under Stryker, Magnus was nearly crippled, and blamed Stryker. When he returned to duty, Magnus attempted to kill Stryker. Stryker survived, and Magnus was forced to flee – the warcaster remains wanted. Since Magnus’ betrayal, Stryker continued to rise in rank; promoted to Commander sometime before the current hostilities began to escalate. In late 605, Stryker was party to an event that shook him to his core: he stopped the destruction of a refugee camp near Corvis by Protectorate forces and Khadoran looters. It convinced Stryker that force and brutality were more apt than mercy. Arriving in Caspia, he cast his sword at the feet of King Leto and demanded to be given the power to wage war as he saw fit. Stryker was subsequently promoted to the newly-invented rank of Lord Commander, sidestepping the traditional rank structure of Cygnar’s armed services with powers close or equal to a general. He was given command over the Sixth Division—soon called the Storm Division—and commanded to safeguard Cygnar by any means necessary.
He began by campaigning back up the Black River; as he did so, he interned every Cygnaran Menite he found in prison barges bound for Bloodshore Island, Cygnar’s most impenetrable prison. Though King Leto curbed excesses, it was still shockingly dark for this man.
Stryker waged war with a lack of mercy that alienated many—including his old mentor, Nemo—and at the same time it got results. He undoubtedly would continue down the path he had for two years if he hadn’t been faced with an even worse act.
During a fight in 606 with Feora, Stryker was forced to choose between pursuing and vanquishing her or saving innocent lives when Feora deliberately collapsed a church on him – and a number of faithful, innocent Menites also trapped. It was here that a facet of Stryker’s old self reemerged: he threw down his sword, overpowered his armor, and held up the building while his favorite warjack—an Ironclad named Ol’ Rowdy—shattered the main door and permitted those trapped to escape.
The building collapsed before Stryker could emerge, and only Rowdy’s devotion to the warcaster saved him, the warjack digging through the rubble for his master. Stryker convalesced for months in a cell in the Sancteum, finally awakening with Nemo at his bedside; but rather than the lesson Stryker expected, Nemo simply expressed relief at Stryker’s survival and recovery of the part of himself Nemo considered most important: his mercy. As an incentive to recover swiftly Nemo had Stryker’s armor brought to his cell as the older warcaster was due to depart. Stryker didn’t have time to recover, however; Protectorate forces had turned the tide and advanced into Caspia, and Stryker suited up and strode out to join the defense.
Before any engagement could occur, Stryker stepped before the walls of the Sancteum, alone but armed. The Protectorate army was led directly by Hierarch Voyle, who stepped forward to briefly parlay with Cygnar’s most able commander. Stryker, in a gesture unthinkable several months earlier, offered to free Cygnaran Menites and deliver them to the Protectorate as citizens if the Protectorate forces would withdraw.
Voyle refused, proclaimed the Cygnaran Menites martyrs and ordered his Deliverers to fire on them. Stryker was aghast, and attempted to halt the massacre, causing a grand melee. During the battle, Stryker came face to face with Voyle; the Lord Commander lost. Before Voyle could finish off his stricken enemy, the Harbinger attempted to shield Stryker, and was struck down herself. With both warcasters down, Voyle seemed at a loss; with Voyle distracted, Stryker attempted to regain his strength. Recognizing he could not defeat Voyle, Stryker was prepared to buy time with his life. Then the Harbinger told Stryker that Menoth was ready to receive Voyle, and offered her own holy sword Providence. Stryker acknowledged by taking up the weapon.
It burned. It was impossible to wield, but he did so in spite of the pain it caused him. With Providence, Stryker struck down Voyle, shocking the Menite forces into inaction before he was forced to succumb himself. Though Feora claimed that it was time to eliminate Stryker personally “for his affront,” Grand Exemplar Kreoss recognized the weariness of both armies, and declared a withdrawal of the Menite forces from Caspia to rest and regroup – tacitly granting an unspoken cease fire.
Both sides now had room to breath. Stryker could finish the recovery that was almost shattered by fighting Voyle. Though the Black Cygnus remains the seal of the Storm Division, what it now means is uncertain.
So that’s Stryker. He’s been a good guy and a bad guy, and damn that whole Fate thing for putting him in extraordinary situations over and over. What’d y’all think? Hero, villain, or something very much in between? Does he deserve to hold his rank, or does he deserve to go to prison? 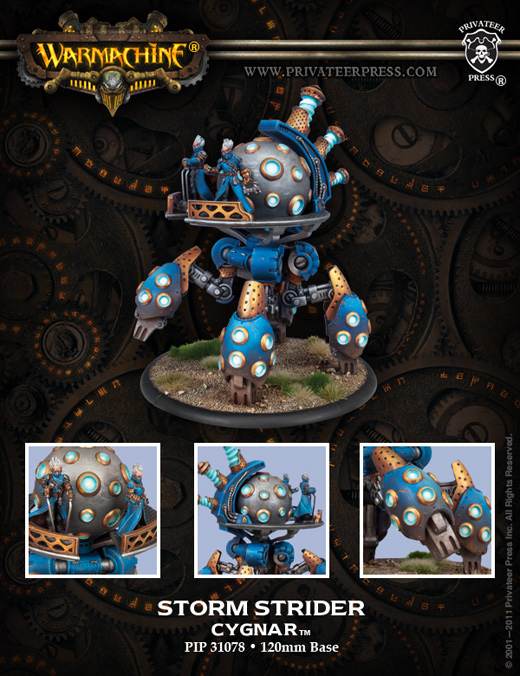