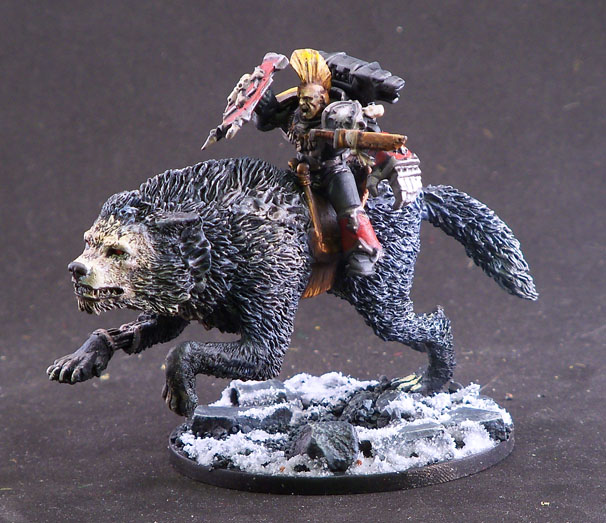 Goatboy here again with another model review from Masq-Mini. I got a chance to build one of the giant wolves they produce and thought I would give my take on it. Here you can look at all the different options they have and I decided to build the first running wolf one.

As usual I will look at a mini from a Value, Look/Form, and Painting stand point on the model. The model is supplied without a base and is a white metal that is bendable as needed. You obviously can’t crank it too hard but you can easily shape some of the legs to help get it securely on a base. I ended up drilling into some wooden disks I got that fit the large circular base size from GW.

You do get 5 models for a decent enough price base. You don’t get the riders and have to supply the legs but if you are playing wolves I am sure you have a ton of Grey Hunters laying around you can butcher. The legs I put on the one I painted did break as I stretched them to fit, but they were an older set of legs that I had cleaned off and reused from time to time. I easily fit them on the saddle and just had to do a small amount of gluing to get him to stay on. Overall you get 5 distinct forms for the models and you have enough of a variation that you can have some cool look wolf riders.

The cost for the US might be a bit much but you do get all five in one go. This is great as you can easily create your main Wolf Lord plus a friend Wolf Lord and then 3 Cav bros that hang out and tell you how awesome your Wolf Lords are.

These are one of the few wolf models that actually look like they might have been human at one point. The snouts are not nearly as long nor as wolf like as others. I can almost see eyes and the old face this beast once had. I do wish they had more mechanical options on there as we get the feeling form the fluff that these guys should have more bionics and other bits as they are extremely old to get this big from a small wolf to the big monstrous dire wolf we see carrying a Space Wolf around. I think the saddles could have used more work but again I know this keeps the model simple enough to not just be a Space Puppies ride. Really I just wish there was more things in the fur, etc on the model too.

For a metal model it do go together pretty well with only the fur lines needing some green stuff to cover it over. This is a blessing as fur is extremely easy to gap fill. It went together well enough that I didn’t pin it and just green stuff secured it. It did fall off my desk as the tail grabbed my shirt and the only thing that was loose after a fall was the tail itself. Even the legs didn’t bend at all as it hit the ground like a cup of mead after you have finished it. These guys are super textured which makes it very easy to paint the fur and other bits on the model. Also each piece is very distinctive on the model. The muscles and forms are not as crazy exaggerated as some other kits but still have a whole lot on there to grab and hold paint. I do wish the model was resin as it would be lighter but then you would lose the ability to bend the legs into new shapes in order to create more variation on the models.

I went with a dark scheme due to wanting to create a test set to show a client. This is much more a Pre-Heresy style scheme and just kind of wanted to test it out. I can only paint so much shadow grey.

The Verdict
If you are looking for a much more wolf like form for your Thunder Cavalry this guys might be right up your alley. They don’t have the crazy steroid wolf look you normally see out there and I feel they are much less cartoony as some of the other offerings you see online and through various Ebay sellers.

Author: Thomas / Goatboy
Thomas Reidy, aka Goatboy, the ever-evil member of BoLS. I do arts, play 40k, and even paint a lot of stuff. I have been playing Warhammer 40K since the 1990s, and have won multiple national events including Adepticon and GW GTs. I've been writing for BoLS for 15 years. Look at my Instagram to see what I am working on - or working on for someone. I am always doing something hobby related.
Advertisement
Review Space Wolves
Advertisement 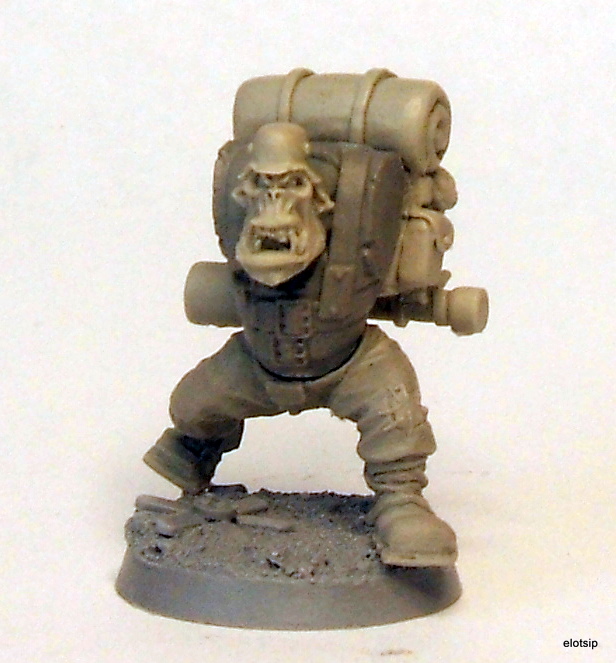