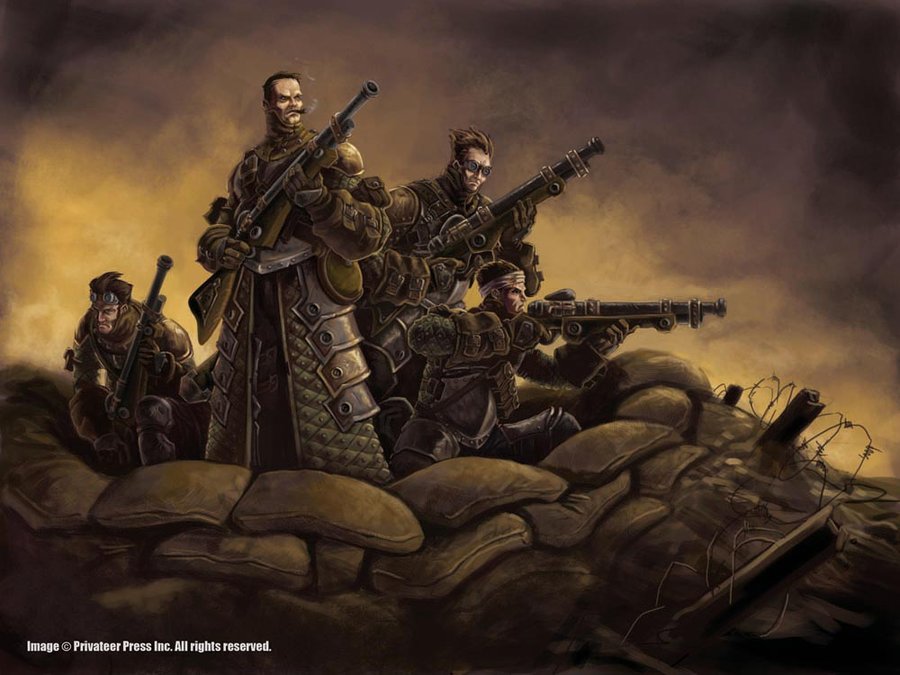 With Captain Damiano on the horizon, I thought that today’s martial house focus should look at the Steelheads.  Steelheads are the consummate mercenaries of the Iron Kingdoms, willing to get the job done, any job, as long as the pay is right.  There are several specializations within the Steelhead Mercenary Company, so today we will examine them individually.

Steelhead Halberdiers – Halberdiers are the bread-and-butter of the Steelhead Mercenary company.  Stat-wise, they seem pretty lackluster.  Average DEF and low ARM stats make them vulnerable to most threats, and MAT 5 on a melee unit isn’t particularly promising.  P+S 11 isn’t that exciting either.  However, it’s their solid abilities that make them effective.  Powerful Charge and Combined Melee Attack give them the flexibility to hit accurately and/or hard when the need arises.  Reach combined with their native SPD 6 gives them an impressive threat range of 11″ unbuffed.  Set Defense also effectively boosts their DEF up to an effective 15 against charge and impact attacks, making them a fantastic front-line unit against a melee-heavy opposition.  They’re cheap, potent, and not to be dismissed.  At the bargain price of 4/6 for a 6-man/10-man unit, Halberdiers are something that you can take en masse without breaking your point budget.  12 points gets you a total of 20 Steelheads.

There are a plethora of buffs to help push Halberdiers to great heights.  Durgen’s Primed makes Steelheads pretty terrifying in melee while Ashlynn’s Quicken increases their effective DEF against ranged and magic attacks and boosts their effective threat range to 13″ on the charge.  Rhupert Carvolo should often go hand-in-hand with Halberdiers for support via granting either Tough and Fearless, Pathfinder, or +1 DEF and Terror.  Normal faction warcasters also have access to decent buff spells that can effect Halberdiers as well, like Arcane Shield, Blur, Iron Flesh, Fury, or Scything Touch.  Attach a Ranking Officer and gain access to even more abilities like Defender’s Ward, Positive Charge, or Battle Lust. Steelhead Heavy Cavalry – Like their brethren the Halberdiers, the Heavy Cavalry don’t have particularly impressive stats.  MAT 5, ARM 16, and POW 12/P+S 11 aren’t much to write home about, but again, it’s their abilities that give them teeth.  Assault and Back Swing effectively give your Cavalry two extra attacks on the charge while Brutal Charge and Flank increase their damage output and accuracy nicely.  A single charging Heavy Cavalry model will get at least four attacks against its target if it can close to base-to-base contact (Impact, Blunderbuss, two Cavalry Axe).  That’s not bad at all.  At 6/10 for a 3-/5-man unit they’re not exactly cheap, but they are less expensive than other non-light cavalry options.  Flank practically makes Halberdiers a requirement if you’re going to the Heavy Cavalry, so if you’re thinking about adding a unit into your list, don’t forget the Halberdiers!

Steelhead Heavy Cavalry benefit well from pretty much the same spells as Halberdiers, save that you cannot run the Heavy Cavalry with a Ranking Officer.  Anything that increases their survivability or damage output will go a long way to helping you get the most out of this unit.  Additionally, their Blunderbusses aren’t terribly accurate, so spells like Dead Eye are a nice bonus to have available.  Since they don’t have native Pathfinder, having Rhupert around is a good idea. Steelhead Riflemen – The ranged Steelhead unit is an interesting one.  Sporting Military Rifles and a curiously expensive, full-unit price tag (5/9), you’re often best giving up an extra point to run these guys in a pair of minimum units instead of a single large one.  As is the tradition with all Steelheads, Riflemen have pretty lackluster stats, but they also have the abilities to allow them to stand on their own feet without a warcaster required to make them effective.  Combined Arms and Combined Ranged Attack make the unit pretty darned accurate with the ability to fire in paired RAT 7, POW 13 attacks with rerolled attacks.  This talent to run-and-gun combined with their preference for running in smaller, skirmishing units makes the Riflemen a good candidate to roll up a flank.  However, the smaller the unit, the less return you get from unit spells like Snipe, Deadeye, or Damiano’s Paymaster ability, so be mindful of the buffs you have at your disposal when deciding how to add Riflemen into your list. Stannis Brocker – Brocker is an interesting solo.  In terms of his own prowess, he’s not too bad.  He has more wounds and higher ARM than Steelhead Heavy Cavalry in addition to having higher MAT and straight damage.  However, he does lack Flank and a ranged weapon, so his damage potential isn’t quite as high.  Brocker provides all Steelhead models with the Tactician ability, allowing them to move, see, and attack through each other.  If you’re running a large volume of Steelhead models, say 20 Halberdiers, 10 Riflemen, and 5 Heavy Cavalry, you’ll most likely run into a bit of difficulty with your own models blocking charge lanes and/or line of sight.  Tactician solves this problem nicely, allowing your Riflemen to shoot through your front ranks of Halberdiers and your Heavy Cavalry to move through your own Halberdiers to get the best possible position on a charge.  While I would never suggest Brocker as an “auto-include” in any army, the more Steelheads you run, the more mileage you will get out of Brocker.  A list with 10 Halberdiers and a minimum unit of Heavy Cavalry might not be the best time to take him, but the aforementioned gaggle of Steelheads makes him a great investment. Captain Damiano – Since we now have his stats and we’re talking about Steelheads, it’s hard to leave Damiano out of the conversation.  Damiano comes with a load of great benefits for your Steelheads.  Paymaster provides two nice buffs: Money Shot and Battle Maneuvers.  Money Shot is fantastic for buffing up your Riflemen and Heavy Cavalry units, making the former effective RAT 7, POW 13 and the latter RAT 7, POW 14.  With paired Combined Ranged Attacks, Riflemen jump up to RAT 9, POW 15 with rerolls on the attacks.  That’s pretty terrifying for just two guys with little rifles.  Battle Maneuvers is your go-to ability for controlling your model placement.  You can use it to scoot your Riflemen back after shooting, to clear out your Halberdiers or Cavalry to make room for something else to charge through, or to push them forward to engage the next rank after wiping out the front.

Spell-wise, Death March turns the cheap Halberdiers into the gift that keeps on giving, increasing their effective MAT up to 7 and giving the entire unit the ability to move 3″ and attack at the start of your turn if any one of them dies on the previous turn.   It also makes the Heavy Cavalry more adept at making impact attack rolls.  Deadeye goes great on anything with a gun, and Sure Foot is a fantastic DEF buff (pairs great with Rhupert’s Heroic Call!).  Damiano’s feat isn’t to be ignored either.  +3 STR and ARM fantastic on army with such long threat range, allowing you to hit hard and first and then weather the retaliation.

That’s a quick look into the Steelhead Mercenary Company.  Discuss!

Author: relasine
Relasine is a veteran tabletop wargamer with over 10 years of experience. His specialty is Privateer Press' Warmachine & Hordes gamesystem. He began writing for BoLS in 2010.
Advertisement
Mercenaries Warmachine-Hordes
Advertisement 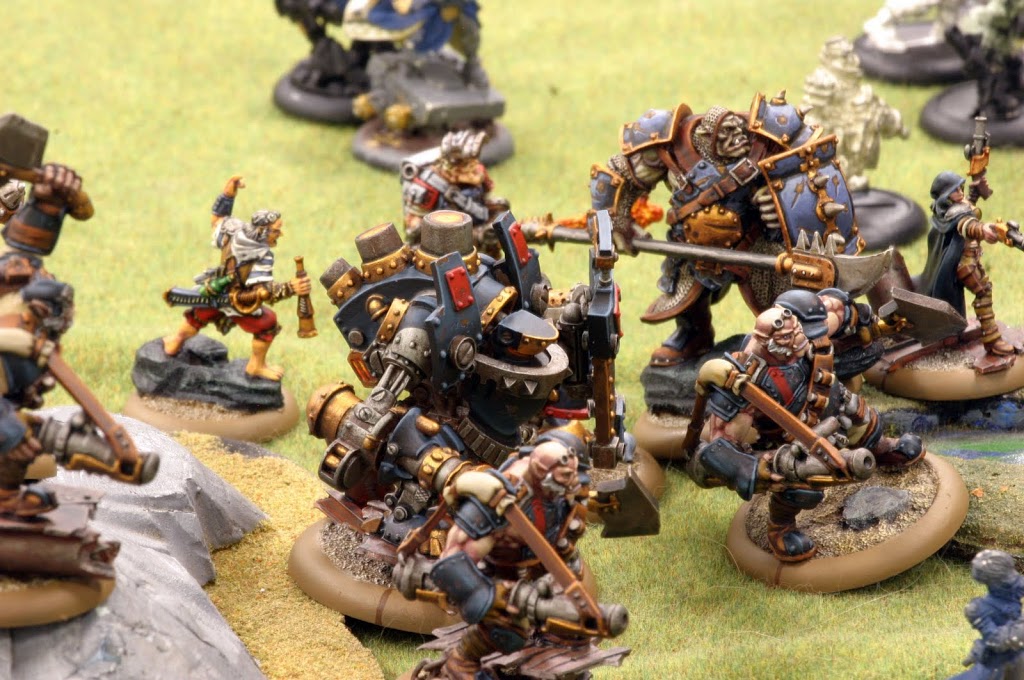