It’s been awhile since I’ve posted an update – we are in the midst of tournament season down here, so work if going a bit slow while other, more pressing projects are being completed by the crew. What has been showing up at our FLGS on gaming night is amazing, though. Banshees painted by CRP
“I wanted to stay as close to the Guardians paint scheme as possible. However, I wanted them stand out, as well. So, I decided to reverse the color scheme. Also, I have been dying to paint something Orange. I started with a white primer, base coated Fiery Orange, used Shadow Grey for the taberds and trim, and Bleached Bone on the helmet. The ladies also got colored hair. I thought it appropriate. At first I painted the helmet Shadow Grey but it didn’t look right. So, I went back in with Bleached Bone and that appealed to me a lot more. I used the old GW Blue Ink on the sword, over Mithril Silver. Next came a diluted coat of ‘talent in a jar’ AKA Badab Black. I finished up by highlighting with Fiery Orange, Fortress Grey, and Mithril Silver. Now, I just need a break in the tournament schedule to get the rest painted up.”
Psyberwolfe repaired and did a beautiful paint job on one of the Autarchs… In his own words: “So when I got this model he was in several pieces and he needed to have the paint stripped. After stripping the paint the rest of the conversion fell apart and I saw that there was an improvement I could make that would really help the conversion without taking away from the original intent.

The Reaper Launcher was pinned to the side of the bicep, and the hand wasn’t pinned to the arm or gun. I pinned the hand to the gun and the gun into the hand. I then applied green stuff over the old holes which allowed me to get rid of three random bits that were covering up the old conversion. This small change opened up the pose, and gave the figure an appropriately epic pose of wielding the launcher in a single hand.

I put about 12 to 15 hours into the paint job mainly because this is what I call a nice table top job. There are definitely some errors in the paint but I’m trying to really knock out my paint cue right now. The white and orange made me the happiest and it was a ton of fun do. I know this model will look great at the narrative event.” And the crowning piece of the army: the Cobra Super Heavy Grav Tank painted by BushidoRedPanda with decal work by BigRed. These pictures are in progress shots… there’s a little more work to be done for it to be considered complete. Some commentary from Bushido: “I varied the scheme a little to make it easier for the masses that are collectively painting the army to replicate. The color scheme looks excellent and is pretty simple.  Bigred has been saying he wants to re-paint his Eldar army using the same scheme, but I think I’ve convinced him to wait for new models.

“The main orange is standard Macharian Orange foundation from GW. I used Sombre Grey from Vallejo, but it is nearly identical to GW’s Shadow Grey. The guns are Vallejo Ice Blue, which I don’t think has a GW equivalent. “The gems are shades of blue, and the canopies are shades of purple- some of which were custom blends. The orange highlights are Vallejo Orange Fire, which is basically the same as Fiery Orange from GW; and the grey highlights were the Vallejo equivalent to Codex Grey.” A little about the decal process from BigRed: “The decals seen here in their unfinished state use the Yme-Loc logo sheet, and were applied using microsol and the techniques found here. The silvering will be minimized in the final stages using a combination of backfilling with matching paint around the logo, and a coat of matte varnish.” I’m really pleased with the overall outcome [paint, decals, the whole she-bang], and I’ll be very proud to wield this model – and the others that have been completed – on the narrative tables at WarGamesCon this year.
The project is moving forward… be on the look out for new pictures of work from Minus67, RealGenius, and others. [Maybe even my newb, 3 color minimum work… maybe.]

Author: The Girl
The Girl is a tabletop Games & miniatures professional with over 15 years of experience in the industry. Her specialty is the world of Games Workshop's Warhammer lines of products. She began writing for BoLS in 2010.
Advertisement
Eldar Hobby Warhammer 40k
Advertisement 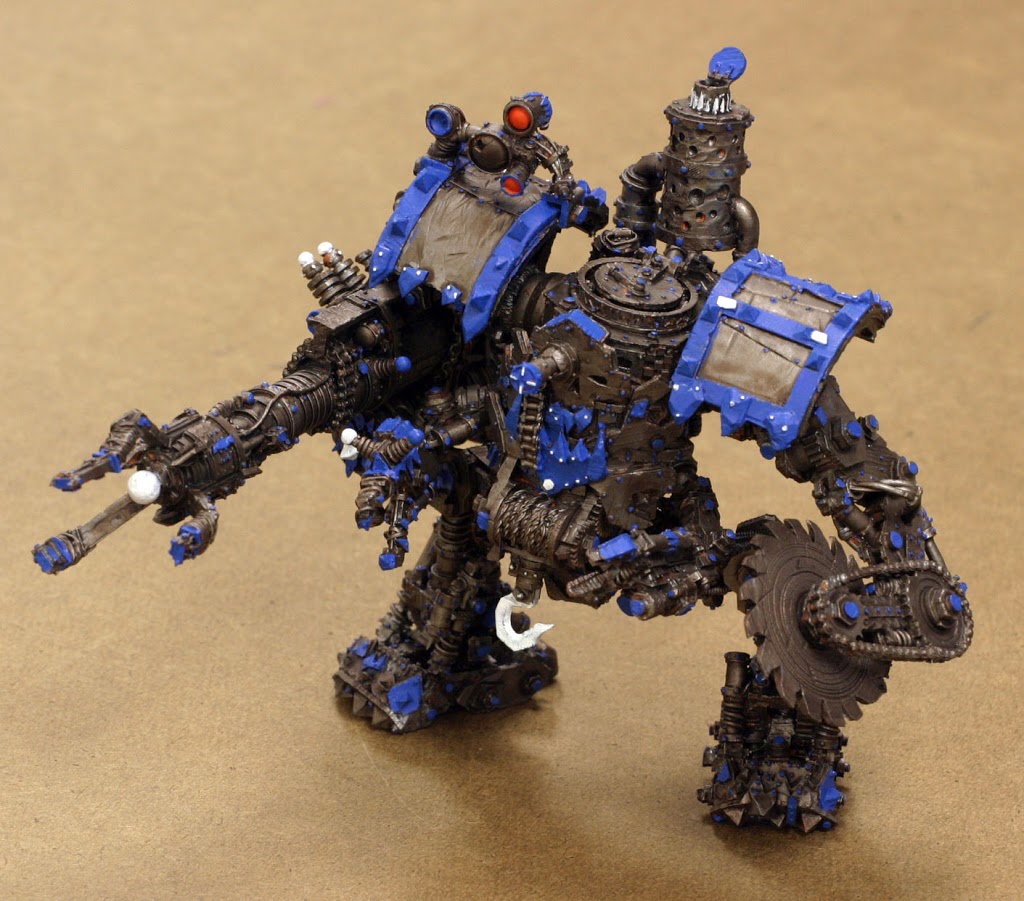