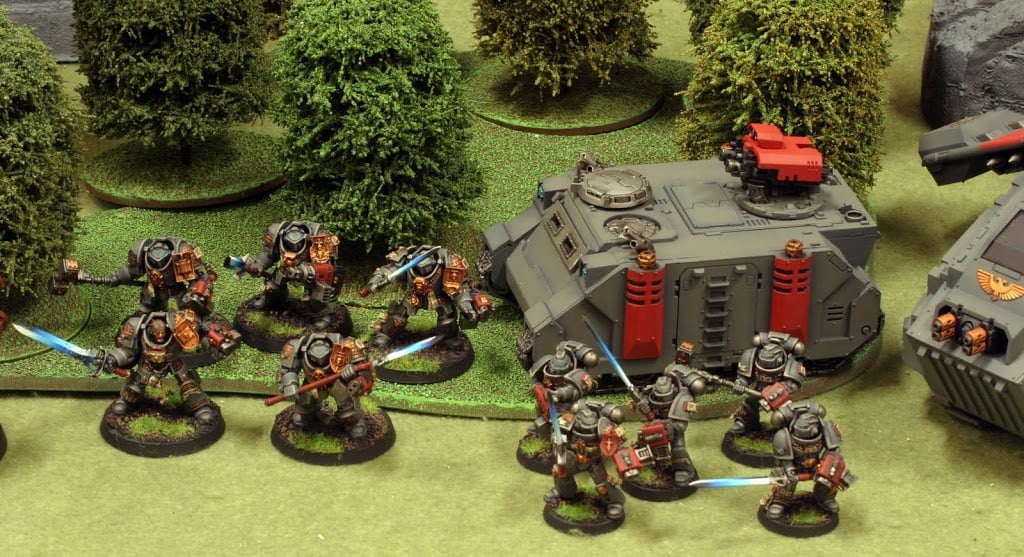 My flirtation with 40k over the years has been fairly mercurial.  Lets take a look at my latest – the Grey Knights.
I play lots of games and tend to suffer a bit from “Gamer ADD”, but I still enjoy the occasional foray into the 41st millennium, having owned several armies over the last two editions.  As much as I hear people complain about Games Workshop’s practices, I always have to give them credit for having the best damned plastics in the business.  When the Grey Knight Codex launched and the new plastic kits for the Grey Knight Strike Squads and Terminators arrived at my LGS, my zest for 40k was invigorated, so I took the dive and picked up an army.  Since this is BoLS, I’d be negligent in my duties if I didn’t throw the list up that goes with it:
Grey Knight Librarian – The Shrouding, Quicksilver, Sanctuary, Might of Titan, Warp Rift, 3x Servo Skulls, Master-Crafted Nemesis Force Sword

– 2000 Points
I won’t pretend to be any kind of expert on list building, but I’ve played a few games with this one, and it feels pretty good.  I’m sure it’ll see revision as I play with it and subsequently get roflstomped by the local veterans, but I’d probably best leave such discussions to the more experienced 40k writers.
Anyway, when I decided that this was an army I really wanted to invest some serious painting time in, I was immediately reminded of Tom Schadle’s work.

I’ve been a fan of Tom’s work for ages, and his Grey Knights were no exception.  In the case above, I really liked the sharp contrasts between the light and dark greys and, most of all, the fact that his Grey Knights are, well, grey, and not the standard silver that we’re all too familiar with.  Sure, I could have banged out an entire army in just a few weeks if most of the surface area was painted silver and given a few localized washes with a bit of Citadel Badab Black and Asurmen Blue, but I wanted to go all out. To achieve the greys, I used a variety of P3 paints.  The high level of liquid pigment combined with some great natural progressions from one color to the other made them a joy to work with.  While the obvious tone in these models is grey, there are subtle traces of blue, green, and beige that bring the model alive.  So, on to the formula.

First, each model was base-coated in P3 Greatcoat Grey.  It’s a relatively dark grey with hints of blue in it that can be really seen when watered way down.  This covers really well, even when thinned out a bit.  Next, crevices are given a localized shade of 50/50 Greatcoat Grey/black.  The effect here can be best seen by looking at the shoulder pads (see above).  The next step is a quick clean-up with Greycoat Grey again to make sure that the shade is nice and crisp.

The first highlight is a 50/50 mix of Greatcoat Grey and P3 Bastion Grey.  Since I was painting 31 models on-foot and eight vehicles, I started the entire project by mixing two of pots of this so that I wouldn’t have to constantly rely on a wet palette.  The next highlight was straight Bastion Grey.  For a final highlight on the most exposed areas where I really wanted to attract the eye, I used a 50/50 mix of Bastion Grey and P3 Trollblood Highlight.
The reds were painted with a base coat of Vallejo Hull Red.  While I find the color to be a bit flat, it covers like gangbusters, and provides a great starting point to build up on.  Using a wet palette, I then slowly highlighted my way up to P3 Skorne Red.  The exception to this can be seen below with the Dreadnought.  It was base coated in Skorne Red and a shadow of watered-down Hull Red was applied along the inside edges where it meets the gold plating. The metals were easy enough.  I’m a huge fan of Citadel’s washes and use them whenever I can get a good-looking result quickly.  While just painting something Boltgun Metal and giving it a quick wash with Badab Black might feel like cheating, it’s the results that matter.  The golds were done by starting with a base coat of P3 Gun Corps Brown followed by another base coat of Citadel Dwarf Bronze.  I love the color of Dwarf Bronze, but I’m not a fan of the coverage, so whenever I have the patience I always start with a base coat of a light brown.  This was followed by a liberal wash of Citadel Devlan Mud, a reclaiming with Dwarf Bronze, then highlights with 50/50 Dwarf Bronze and Citadel Shining Gold, and then a final highlight of Shining Gold.
The eyes were a piece of cake.  A quick little dab of P3 Arcane Blue, a wash of P3 Meredius Blue, a little bit of cleanup, and they’re done.  It’s not the most elegant way to do eyes, but I was pleased with the results.
In my test work with this army, I tried incorporating the standard red/white heraldry, but I found that white, even if tinted a little bit, just had too high of a contrast with the darker grey that I was using, so I decided to ditch it and simply used gold and red for most of the heraldry.
The swords and halberds were all airbrushed using an Iwata Eclipse HP-CS Airbrush and Smart Jet Compressor.  I used the method described here courtesy of Buypainted.com.  This was admittedly my first time using an airbrush, but I’m pretty happy with the result.  I had originally used the standard “lightning sword” method, but it felt a bit tired.  Since I had an airbrush in the closet, I decided to go for it.  My only advice here is to paint the swords and halberds separately as shown in the linked video.  Since I did this step last, I consequently ended up mummifying 21 models in masking tape. The Razorbacks and Storm Ravens were painted mostly with airbrush work using the same equipment as the Nemesis Force Weapons, again a first for me.  Having painted plenty of Citadel vehicles over the years, I was shocked at how quickly it all got done thanks to the airbrush.  A base coat of Greatcoat Grey, followed by a highlight of 50/50 Greatcoat Grey/Bastion Grey, and a quick re-shading in a few choice places with Greatcoat and the majority of the work was done.  After that, I taped off areas to be painted red, and gave them a couple coats of Skorne Red.  Then it came down to details (engines, books, shields, guns), which honestly took most of the painting time.  Looking at the Ravens and Razors now, they do feel a little “flat” to me, so I might revisit them with Mr. Airbrush again to dirty them up a bit by adding scorch marks around thrusters and exhaust vents and giving the tracks a nice, little brown treatment.  For future projects, I’ll most likely go for a higher contrast as well.
The one bit of advice I can give to people trying out an airbrush for the first time is that if you’re using your regular model paints (Citadel, P3, Vallejo, Reaper, etc.), water them down and filter them through something before it goes into your airbrush.  I used a pair of my wife’s pantyhose.  This completely solved the initial clogging issues I was running into due to dried chunks of paint gumming up the works.
While I did take this army to Wargames Con, I spent the tenure of my time there in the Warmachine tournaments all weekend, but I did manage to squeeze out a pickup game and to enter a handful of my Grey Knights in the painting competition, which earned me a best-painted Sci-Fi unit award.  Having just taken this army to a local Feast of Blades qualifier, it did rather well, taking third overall and having the highest appearance score of the day.  Not bad for someone who’s played less than twenty games of 5th Edition!
Advertisement