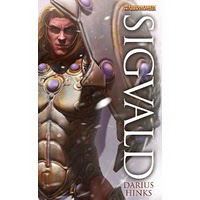 Sigvald the Magnificent leads the Decadent Host on a fun-filled adventure in the Chaos Wastes in this new novel by Darius Hinks.

The Warhammer universe is filled with all sorts of characters, some good, some bad, some falling somewhere in-between. Sigvald is definitely not one of the “good guys”, but he definitely has a certain appeal to him, much like his master (mistress?) Slaanesh. This novel explores Sigvald in all his twisted, decadent glory, giving some details on his past and telling a tale of one of his adventures.

Sigvald is two stories, really, the main one being about Baron Gustav Schüler and his meeting with Sigvald that leads to his utter corruption and joining Sigvald’s Decadent Host. The other tale involves a Norscan tribe called the Fallen, whose history and current state of affairs is directly tied to Sigvald’s past. Both threads eventually collide, of course, but getting to that collision is half the fun.

As you may have guessed, Sigvald is completely, utterly corrupt, entirely devoted to Slaanesh and all that that entails. The descriptions of the Gilded Palace and the Decadent Host are lurid and will leave you feeling a little bit dirty, maybe slightly disturbed afterwards (unless you’re into mutants, psychopathic surgeons, and sexually over-charged daemons) but since this is a book about one of Slaanesh’s most devout followers, well, you should know what you’re in for. Sigvald definitely delivers on that front.

There is an issue, though, a nagging thing that haunts the whole novel. If you’ve read a lot of fantasy (like I have), it will probably start around the time you first meet Sigvald and it’ll get worse the further you wander into the Gilded Palace. Sigvald, you see, shares many, many characteristics with a character fantasy fans hold near and dear to their hearts: Elric of Melniboné. The list of similarities is lengthy: royalty that worships Chaos; decadent, decaying empire; purveyors of subjecting and experiencing pain; effective immortality; unusual appearance; and an iconic blade. Even the supporting cast, the stand-outs from the Decadent Host, is reminiscent of The Dancers at The End of Time, and the first half of Sigvald could have easily taken place in Elric at The End of Time. Does that make Sigvald derivative? Possibly. Does that make it so derivative as to come off as homage? That decision will be up to you.

Having said that, the appeal of Sigvald is the look into the psyche of a man that has given his soul to Slaanesh, and expresses that devotion in almost every action he takes. Sigvald the man is vain (often checking his appearance at inopportune times, wiping blood from his ornate armor just moments after spilling it) and cruel, but experiencing every sensation with an almost child-like glee. It’s disturbing, as it should be, and yet at the same time it’s horrifically fascinating, much like watching a train wreck.

Taken on its own, Sigvald isn’t a bad book. There are a few twists and turns, and as I said before, it takes you on a journey into the Chaos Wastes, where along the way you’re exposed to all sorts of horrors, mutants and wonders. If you’ve ever wondered what it would be like to be Sigvald, this is the book for you.

What is your favorite Warhammer character? Would you like to see a Black Library novel about them? Is the Warhammer universe too derivative? Or is the fantasy world too firmly established for there to be very little that is wholly new?