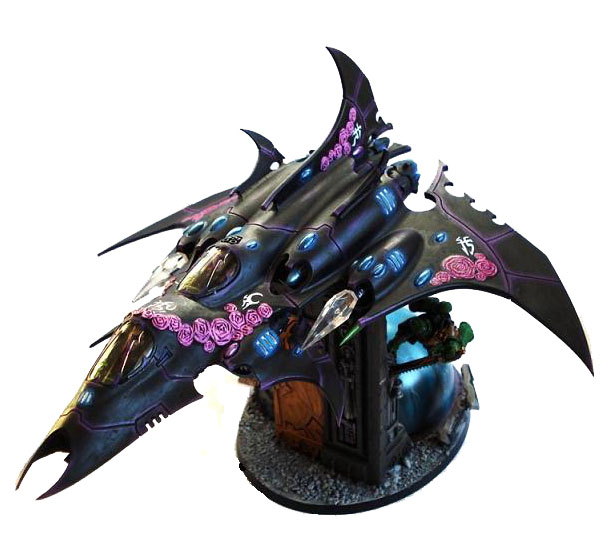 The latest set of Dark Eldar releases has motivated me to start over with my Dark Eldar army and I just love conversion work.  Lets take a look at what I’ve cooked up.

The new army’s colour scheme has changed, as I was not satisfied with my previous one. There are now lots of blacks, purples and whites, so it’s a bit more conventional but generally looks better I think. There is a running rose motif as I discovered I can freehand and/or green stuff these fairly economically. The roses are just spirals of colour of warlock purple with progressively more white added to each layer.

Eventually, I will get round to updating some of my old models for the new colour scheme. Void Raven
WYSIWYG sticklers may disagree but in all honesty, the new Razorwing already serves fine as a Void Raven with a little imagination and the right choice of weapons, but I wanted something more substantial.

The new Venom fits fairly nicely with some green stuff blending and extends the profile in the way that I wanted.

I also had some Fire Prism crystals that I have used as void lances, just for something different, but the regular dark lances would have been fine too.

The void mine is built into the base. I’ve missed off the flying stem in favour of a building being torn to pieces by its destructive power. I had wanted to use the new SOM templates but they are much larger than expected so I’ve stuck with the webway portal but it isn’t glued down in case I need to borrow it as the official marker. It’s a bad day to be a Salamander, a few of my models have dead Salamanders as they are a good contrasting colour and they appear in the codex fluff.

I deliberately painted the gems with metallics and a glow to be different from the normal Craftworld Eldar method with the white specular highlight. Ravager
I’ve been sitting on this idea for a while now. I’m not a big fan of the sail and rudder mechanism on the new Raiders (although I like the shape of both pieces). It just feels a little too cheesy that a futuristic craft is steered like a boat.

A more streamlined Ravager was achieved by moving all the guns to the central line. The sails then move to where the gun pods are. I couldn’t fit all three in so the last one is underslung on the prow. The Toughest part of this conversion was actually the seated pilot in the middle. Only problem is remembering which one is supposed to be left and right in case of a weapon destroyed.

I didn’t much like those thorn strips before, but they fit quite nicely with my rose motif.

The Crazy Eight
I’ve done all eight special characters as plastic female characters to fit my army theme. I’m not a big fan of some of the choices so I’m hoping to build an army using most of the characters as either haemonculi or squad leaders to get them all on the board at once. 1.       Vectress (alternative = Archon)
She’s made from the Island of Blood mage with a few extra dark eldar and other bits.
The sceptre of the dark city is built from a Raider pole, an impaler and a couple of bayonet bits from the Warrior sprue. The dark sphere thingies come from the fantasy battle wizard.
Very careful transport will be needed but I have a padded character box that fits in my bag especially for my centrepiece models.
I haven’t done the Dais of Destruction for obvious reasons (it stinks and I can’t afford the points anyway L). 2.       Rakatherine (alternative = Haemonculus)
Rather than convert the finecast Rakarth, I’ve started from scratch with some Wych and Hellion parts, a flesh cloak from the fantasy Corsair kit (plus green stuff), Ghoul hands, a few Talos parts and a dead marine (the spine is from a Necron Destroyer). The box on the ground is to represent the casket of flensing and uses another battle wizard bit.

The pose will be familiar to anyone who has seen the predator films. It’s a little cluttered, but I wanted the four main arms plus some vestigial ones, so there was a lot to squeeze in. 3.       Duchess Sliscus (alternative = Beastmaster)
I originally conceived this model for Vect’s Dais before the codex was released. I wanted a decadent pose lounging over a throne rather than sitting upright like the old Vect.  I re-adapted the idea for Sliscus, as I think it fits her fluff even better. She now has a floaty, fun-time throne made from a Hellion skyboard and some High/Dark Elf parts.

The rider is made from Warrior parts and another Corsair cloak. The pose hasn’t come out perfect (it looks odd from some angles) but I’m reasonably pleased with it and it certainly stands out.

4.       Baroness Sathonyx (alternative = Beastmaster)
One of my favourite models so far actually has very little conversion work; it’s mostly just a repose of the Hellion kit with a fantasy High Elf mage cloak and a head from the new Scourge kit. Her skyboard has been extended with Reaver jetbike parts as well. 5.       Decapitator (alternative = Haemonculus)
The new Sorceress model was used for the Decapitator with extra arms and a big choppy sword from the Talos kit. I like the new model so I didn’t want to do too much too it but a face swap shouldn’t be too hard as it’s actually a separate piece from the hair which shows how advanced the plastic tech is getting.

The base was mostly green stuff with lots of spare skulls form other kits embedded in it to evoke the codex pose.

As I don’t plan on actually using the Decapitator most games I went with a heavily tattooed body rather than the black with glowy runes that most Mandrakes have. 6.       Lady Malys (alternative = Archon)
It’s hard to visualise Malys, as a lot of her fluff is internal about struggles with her inner daemon (literally) and precognitive powers.

I decided her fan was the most unique visual indicator so I super-sized it by making it out of jetbike parts. I used the body from the High Elf mage as robes with the most normal Daemonette head I could find (might replace this at some point with one of the new Black Dragon riders) and a fantasy Empire sword. The base is from the Cronos, and is supposed to indicate her other powers in the rules.

7.       Lelith (alternative = Hekatrix)
The Lelith conversion wasn’t my main priority as the official model is pretty good so I’ve gone for a design that I can use as a Hekatrix with agonisers in regular games, the whips representing Lelith’s shardnet plus she has back-hand daggers on the hilts for close quarters work. The leaping pose was easily achieved by using some legs from the new Scourges. 8.       Drahzar (alternative = Klaivex)
I’ve mimicked the slightly odd pose in the codex for this one with 2 reversed blades, but even with a tilted base, I couldn’t quite get it right.

The main conversion work was on the swords, which are made by combining Corsair swords with Hellion hellglaives.