The Carnifex doesn’t have a too bad profile for a monstrous creature, not too shabby in combat or shooting. The ‘Fex is a bit slow at I1 but the 3+ armour save, T6 and W4 should stand punishment before you whack back with 4 S9 attacks – groovy!

Rules wise this guy has the living battering ram rule which gives +2 initiative when charging, which is pretty nice. Also the Carnifex has the fearless special rule, which be annoying times but also a blessing in disguise. Instinctive behaviour for this beast is feed, so the Carnifex is going to start raging off, this shouldn’t be too much of a issue because whatever it is the Carnifex is going to destroy either way (though it can sometimes be that empty, weaponless, immobilised tank which isn’t threatening you in any shape or form).

What you can do is take the Carnifex in units of 1-3, having 3 ‘Fexes blasting or charging at you can be nasty, but also a costly unit investment. If you take a Carnifex as a single you can take a Mycetic Spore which you can deep strike the big fella onto the board – this works great with two pairs of twin-linked devourers.

Standard wargear is a pair of scything talons which lets the Carnifex re-roll to hit in combat, that’s pretty cool. You can upgrade a pair of scything talons to crushing claws which gives + D3 attacks but you always strike at initiative 1 regardless of modifiers so you lose the funky +2 initiative charge which isn’t cool. For 25 points I’d leave the claws at home, even though a model with claws looks damn cool IMO 😉

The Carnifex can do ranged shooting which is where things get interesting. For anti infantry it can take deathspitters, devourers and a barbed strangler. The deathspitters aren’t worth it as devourers are far better though a strangler seems interesting, but for 10 points more you could get two pairs of devourers – nasty. It can do anti tank with range too using the heavy venom cannon. I’ve found the heavy venom cannon to be hit and miss like any blast weapon but with -1 on the chart you do think twice about taking it. However the point of the HVC isn’t to destroy vehicles really, the point is to disable them some way or another and setup other Tyranid models to assault those immobilised/stunned vehicles 😉

The Carnifex has some extra goodies like frag spines which count as frag grenades, very useful to keep that +2 initiative bonus when charging though cover and only one of two Tyranid units to get some type of frags as standard wargear.

Adrenal glands can be useful giving furious charge which lets you auto penetrate most vehicles but more importantly gives a total intiative value of 4 when charging, as quick as a Space Marine.

Toxin sacs… just forget about them.

Bio plasma sounds cool but 20 points for a 12″ plasma cannon? er, no thanks. Regeneration is a bit of expensive considering you’re just banking on that 6+ to appear which never can, could end up wasting 25 points for nothing.

* Re-rolls to hit in combat

* Can take a Mycetic Spore

* Not so quick reaching combat

Tactics with the Carnifex is pretty simple it’s a “click and point” unit I like to say as it does what it says on the tin. If you’re going with a combat Carnifex best give in frag spines when charging into cover, I consider adrenal glands too mainly for that total of initiative 4 when charging. I guess you could take bio plasma as a ranged weapon as you still re-roll to hit in combat, but remember it’s expensive and short ranged so is it really useful? Sure it forces invulnerable on Terminators and dusts power armour but so will the Carnifex once it reaches combat. Speaking of reaching combat remember it doesn’t have Fleet so you will have to keep running it to get into combat quickly.

Shooting is pretty simple though you can customise the Carnifex for what you want to shoot at. Using the HVC you can hang back in terrain (hopefully get cover too) and snipe away at vehicles, though being a small blast it can tackle infantry too 😉 . If taking devourers consider two pairs if you can as this puts out 12 shots which are twin-linked in total, are excellent for mauling infantry (remember that -1 on morale tests from the devourers ;)) and tackling light armour. If you’re taking a single Carnifex consider a Mycetic Spore and the Carnifex with two pairs of devouers, drop it right into the opponents main cluster of units and let all hell break lose as the Carnifex pumps out 12 shots and then is a immediate threat on your opponents door step. Special rules wise, this fella can deep strike in but dont forget about his tunnel entrance for a single Tyranid unit to enter next turn. Deep striking I’m personally not a fan of but you may find it works for you, as for me when that Trygon pops up it’s a immediate threat on your opponents doorstep and it’s going to get every plasma gun, lascannon, melta, krak missile coming it’s way and if it lives any form of power weapon will be going after it – and you’ve probably done diddly squat. It does have a ranged shooting profile which isn’t too bad, can pop rear armour on vehicles with the ranged attack been S5. One of the more important special rules is fleet which lets this close combat beast get into the fight a damn sight quicker having a possible range of 18″ – nasty! I’d rather run this across the board using whatever possible cover and giving immediate target saturation and threat radius instead of deep striking.

Unlike the Carnifex the Trygon doesn’t have too much wargear options but that doesn’t matter as the Trygon only has a sole purpose; close combat. Standard equipmentgives you a pair of scything talons to re-roll to hit which is pretty cool.

You can take adrenal glands which can be useful tackling vehicles more reliably and for striking before I:4 models in combat.

Toxin sacs…again forget about these.

Regeneration is the same as the Carnifex really, you may not roll a 6+ but with at least 6 wounds you do stand more of a chance to get wounds back.

The last upgrade is probably one of the most important, Trygon Prime, which makes the Trygon a synapse creature. The benefit of this is fast moving units such as Gargoyles and Raveners can be kept on a leash with a Trygon Prime though not only that the shooting is also increase increasing in range by 6″ and doubling the amount of shots, pretty cool eh?

* Can be a synapse creature

* Costs a lot of points

* Hard to get cover saves

* Not too good at shooting

With these two units one will always be better depending on the role you want them to play in your army.

The Carnifex is much better in a shooting role and acting as a support beast instead of roaming ahead and tackling things head on like the Trygon. The Trygon may have a ranged attack but it’s not that awesome as it’s only 12″ and 6 shots which you’re likely to hit 50/50. The Carnifex can do combat but the Trygon does it so much better. If you want a shooting monstrous creature which doesn’t cost more than a Land Raider then pick the Carnifex for your bug force.

If you want a combat beast go Trygon as it will get into combat quicker – sure the Carnifex is S9 but the Trygon has weight of attacks (7 on the charge!) with re-rolls and a better weapon skill. With the Trygon having a possible 18″ assault range it can chew up units on a turn 2 assault while adding target saturation to your army.

So utlimately the answer is what do you want. If you want shooting you go Carnifex and if you want assault you go Trygon.

What do you think – Trygon or Carnifex? What’s your favourite big beast and how are using them these days to lay down the smack on all those Dark Eldar and Grey Knights out there? 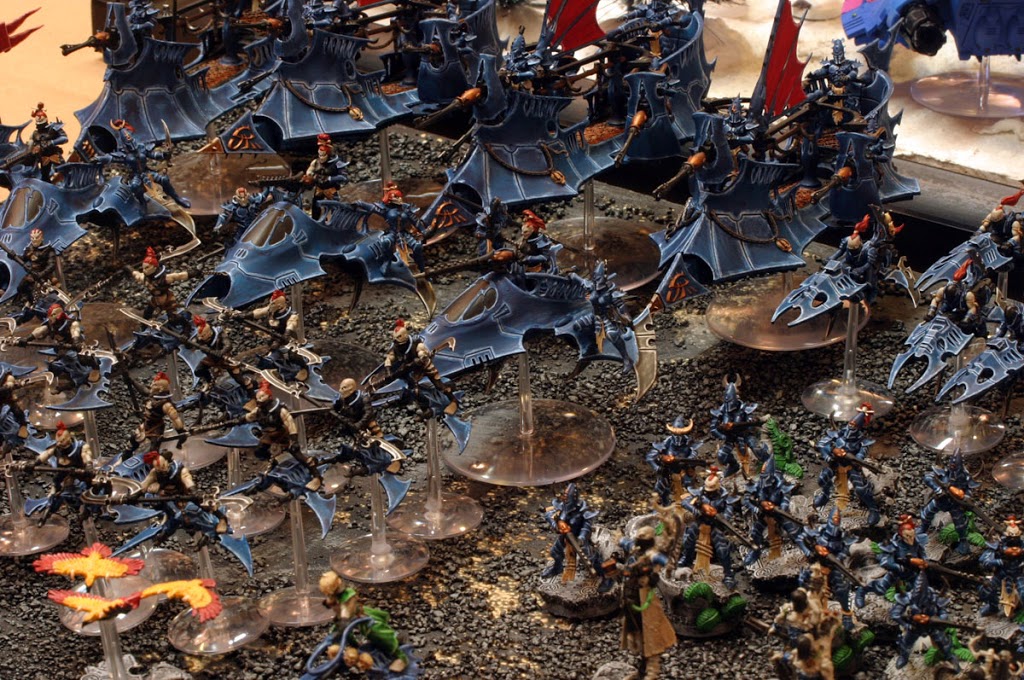