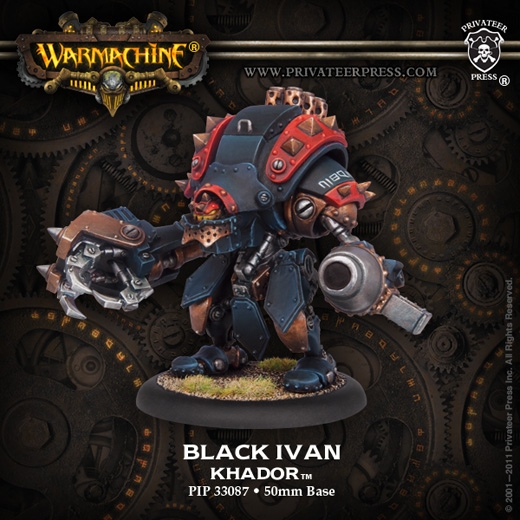 Part II of reviewing some of the basic counter tactics to some of the new Wrath models.  This time up, we put Khador under the microscope.

Khador got some fantastic new models in Wrath.  From a Warcaster who makes ranged Warjacks awesome (a reasonably balanced list including 2 Destroyers and Black Ivan is possible at 35pts), a new ARM 25 Devastator variant, a Mecanik UA who can heal Man-o-Wars, a sort of ‘mini Kayazy’ unit, their mercenary attachment, and of course the Gun Carriage.  My impression from their selection is that heavy armor is on the way with a vengence.

Countering Khador
Harkevich will bring a very different type of Khador list than the one you’ll probably be used too.  He is all about ranged Warjacks.  Being Khador, that means heavy Warjacks with big guns.  Your first thought is likely to be the Destroyer and Decimator, but don’t forget about the Spriggan (grenade launchers), Behemoth, and the new Demolisher.  His Feat lets his battlegroup shoot an additional shot prior to a free charge or slam, and also gives them +3 ARM.  The Broadside spell allows them to shoot again, during their turn, meaning the Spriggan could make two shots on the Feat turn and then be ARM 24.  Ugh.  Lets also not forget that his battlegroup gains Pathfinder, and his Escort spell will give his jacks +2″ movement.  His personal Warjack, Black Ivan, receives boosted attack rolls when under Harkevich’s control.  So how do you fight this?

1) Don’t count on terrain and faster speed to save you.  As a Hordes player you can normally face Khador jacks knowing that you’ll likely be faster and probably be better in terrain.  That advantage disappears against Harkevich.  Don’t forget that pathfinder is not the same as Hunter or Eyeless Sight.  Just because his battlegroup can move through terrain doesn’t mean they can see through it.  They also won’t ignore your cover and concealment defense bonuses for being in it.  You may still be able to out-charge his Warjacks.  With Escort up, the Spriggan (or any Khador heavy with reach), will have an 11″ threat range, but that’s still only 11″.  There are numerous ways to push a heavy Warbeast above that threshold, from Rush, to Slipstream, to Leash, every Hordes faction has spells, animi, and abilities that can speed them up.  You’ll need to use those to get the first jump.

2) An advantage you may have is superior melee capability.  That sounds strange to say, considering this is Khador, but it’s true.  A Harkevich list is likely to take multiple ranged Warjacks to really capitalize on his spells and Feat.  Destroyers, Decimators, and Black Ivan all only have 1 melee weapon.  They sacrifice some of their melee capability for that big gun.  So try to take advantage of superior melee output from your own heavy Warbeasts.

3) A second advantage is numbers.  Warbeasts pay a point cost premium for the flexibility they provide.  When you add in the necessity to field multiple Warbeasts just to maintain Fury levels, you can end up with a very small list.  But because Harkevich lists will normally have multiple ranged heavy Warjacks, the numbers should even up.  Destroyers and Spriggans don’t come cheap!  You just may have numerical superiority against him.  If so, use that advantage to gang up on those Warjacks.

4)  Make him Feat defensively.  What do I mean by that?  Probably the worst situation you can find yourself in is to have multiple undamaged Khadoran heavy Warjacks shoot you, then charge your lines, kill your stuff, and get +3 ARM from the Feat, hampering your ability to damage them.  Hit your opponent with ranged or magic attacks early and starting tallying up damage.  If you can’t prevent your opponent from Feating on his terms and presenting you with a bad charge, then sacrifice some of your models simply to tie him up during the Feat turn.  It will likely take 2 Destroyers/Decimators to kill 1 buffed heavy Warbeast simply due to the jacks only having 1 melee weapon.

5) Use DEF and ARM buffs.  Any effects that give your models stealth, an ARM of 20+, or a DEF of 15+ should keep you safe from most of Harkevichs’ shooting.

6) Go for the ranged kill.  Harkevich will likely have Escort up and running, making him DEF 15, ARM 17 in the open.  He’s great at supporting his army from the mid or back line, meaning the odds of taking him out in melee are pretty low until you’ve already punched your way through a significant portion of his army.  What will hurt him are long ranged shooting attacks.  Boosted Cannoneer shots, Ravagores, CRA’s from Reeves, and Impalers with Farstrike can all put a hurt on the guy.  You’ll need a whole lot of shots to shoot him down in one turn, but 18 boxes only goes so far.  At worst, you’ll “encourage” your opponent to camp some Focus for additional protection, and that’s that many fewer boosted attacks coming back your direction.

The Warjacks
The Demolisher is a new heavy Warjack on the Devastator chasis.  That means an ARM 25 shell when closed up.  It’s two RNG 8 POW 15 guns can be fired in melee, giving it 2 POW 15, and 2 P+S 16 initial attacks on the charge.  pVlad and pButcher players will get a lot of mileage out of this one.  So what do you do?  You can try to weather the storm, or you can take armor piercing attacks.  A Warbeast with ARM 22+ will shrug off most of the damage this thing can bring to the fight, outside of pButchers’ Feat turn, and then hit back and take out the now-ARM 17 jack.  The other way to take this on is with armor piercing attacks.  I forsee Angel’s making a comeback in many Legion lists.  If you don’t have much armor piercing, try slams and double handed throws to at least get it out of the way.  If things work out, you may be able to knock over multiple important models.

Black Ivan and Torch are the two character heavies in the book.  Treat both as you would any other Khador ARM 20 heavy.  Hit them first and hit them hard.  Just watch out for Black Ivan’s auto-boosted bombard shots if he’s with Harkevich, and Torch’s sustained attack ripsaw.

The Battle Mechanik UA is a Man-o-War lovers’ dream.  I remember seeing a full Man-o-War army in Mk1.  Having pButcher and that many high ARM, multi-wound, medium based models was tough to deal with.  Well, now the Butcher is a stronger Warcaster, and the Mechanik’s gain a UA who allows them to heal those damaged Man-o-War’s.  What’s worse is that Khador players can have two of these guys in a standard list!  If you take the UA out, the rest of the Mechanik’s lose the ability to heal Man-o-Wars.  That’s easier said than done simply because he’ll likely have a wall of medium based models in front of him to screen him from attacks.  Models with Leap like the Totem Hunter, Raek, and Bloodrunners are solid ways to get past that wall, but you’ll probably need to find ways to damage him first.  His ARM 16 with 8 wounds is difficult to take out.  Try targeting nearby models with AOE’s and boosting the damage rolls against him.  If he’s not close enough to other models for that, arcing fire shots should be able to wear him down.  The other way to deal with him is to ignore him!  If you can do enough damage in one turn to kill a Man-o-War model, he’ll have nothing to repair.  This is significantly easier against Demo Korps and Bombardiers.

The Kayazy Eliminators are effectively a mix of Kayazy Assassins and Menoth Daughters of the Flame.  They’re a 2 man/woman unit with Stealth, Gang, Acrobatics, Duelist, and Side Step.  They also have Combo Strike, but that only pushes them up to a P+S 13; 15 with the Gang bonus.  AOE’s are your best bet to nail these gal’s.  They’re ARM 11 with 5 wounds, so even a boosted POW 7 has a reasonable chance to take them down.  POW 10 magical attacks, such as Chain Lightning or Eruption of Spines (preferably hitting a nearby target with much low DEF) should also do the trick.  They’ll be DEF 17 in melee, so if you’re gonna send something in, make sure it’s got the MAT to hit.  Even a Totem Hunter with them as it’s prey won’t be an automatic win.

The Koldun mercenary unit attachment doesn’t scare me.  He can grant the unit an additional 3″ of movement ignoring free strikes, making units like Croe’s Cutthroats or the Nyss Hunters very quick indeed.  He’s DEF 13 and ARM 13, with 5 boxes, so if he’s really causing problems you should be able to take him down at range or in melee without too much trouble.

The Gun Carriage is the….strangest Battle Engine I’ve seen.  It’s “cheap” at 9 points, with two RNG 12 POW 14 AOE 4″ cannons and a sniper rifle, but there are few things in the faction that directly synergize with the model.  pVlad’s Signs and Portents and eVlad’s Transferrence spells do, but then, they work well with everything.  pSorscha can also make some use of this due to her Feat and the knockdown from her Tempest spell.  Having faced the Gun Carriage twice now, I can testify that two POW 14’s hitting a light or heavy Warbeast/Warjack can hurt.  The way I’ve treated it is as a Destroyer without the melee capability.  It’s not normally at the top of my “kill now” priority list.  I simply try to ensure that the Carriage doesn’t get a free round of shooting against a knocked down Warlock.  This will die to the same measures you’d use to kill any other ARM 20 Warjack.

That sum’s up Khador.  Keep an eye out for the next faction article!

Warmachine: Unbound- Lessons From the Table 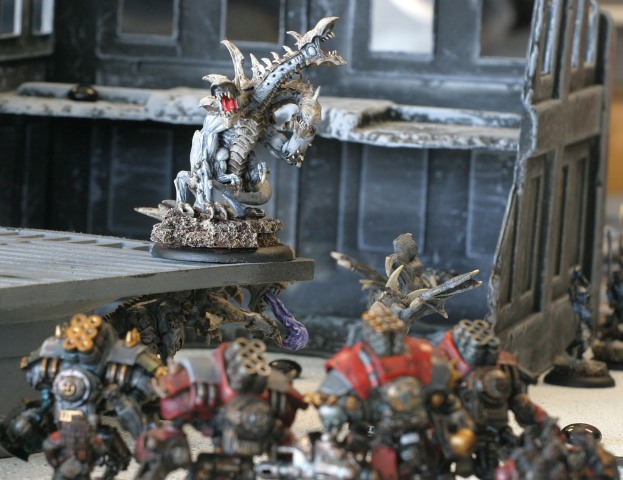