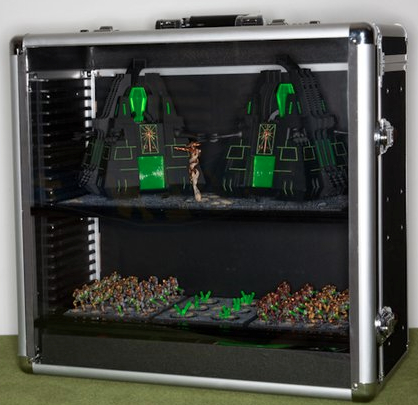 On the Sunday morning of the 40K Championships at Adeption 2011, I was wandering around with my handy camera, grabbing video for you, Oh Faithful Reader… and I brutally tired.  Then I happened to walk by a new product and woke right up!

The product was TableWar’s new Display Tower, and it remains as exciting now as it was then!

I introduced myself as Brent, a writer for a little blog called Bell of Lost Souls, and asked if he would mind doing an interview.  Having shot it, I made the tough decision to sit on it until the product was actually available…

…and having shown you the video, you can probably guess that it is!

(Just a word: the product has changed slightly since the preproduction model shown in the video.)

Go to TableWar.Com right now and check it out!

Right now.  What are you waiting for?

Need more convincing?  Let’s break down the product a little.

The TableWar Display Tower
A Closer Look: the Bits and Pieces

As you can see, this box is tailor-made for you Fantasy players out there!  Your units will easily magnetize to their base, then store while all ranked up.  I imagine TableWar will sell a huge number of the interchangeable base sections to players looking for the perfect rank and file solution.

A Word With Doug, Co-Owner

I had the opportunity to chat with Doug over the last week.  He was very generous with his time and answered numerous questions; here are the four (arguably) most important.

Brent:  Where do you see your product in the miniature bag market?

Doug:  Bag Market? I think we are in a whole different market position than the foam products.  Our cases and modular system take your army to a whole new level of display, storage (showcasing), and light transport.   People spend so much time and money on their armies and we want to give them the ability to show off their armies with ease and style.

Brent:  What do you see as the main advantage of your product?

Doug:  Simple.  You can take your army from your display shelf and put it directly in your new Display Tower, take that directly to the game table, and once there you’re immediately ready to deploy.

Having the ability to view your entire army while in the case is a huge advantage, from making sure you have everything you need for your games along with making sure you don’t leave anything behind at the table when you head home.  No more leaving models behind, because you can see one of your tray slots is empty in your case.

Brent:  The product appears designed to allow any number of future products – are there already expansions in the works?

Doug:  Oh yes! We have so many products in the works for the future, both near and far.

Brent:  How do you see it; are your customers going to purchase a case for each army, or do the custom trays allow you to take an army off the shelf and place it unit by unit in the Display Tower?

Doug:  They could use the same case for all their armies with the modular system.  Each unit would have an individual Unit Tray or Display Board, and that is what gets put into the Case.  But I could see people taking 1 or 2 cases to the game tables, depending on size of army.  Some might even prefer two half-size cases over one full-size. There you have it, boys and girls, Unicorns and children of all ages!  The TableWar website is open for business, and Doug and his partners are currently offering 30% off case accessories until August 31st!

Get to it already, folks!

That’s it from here.  I was hoping to have one of these cases in hand to fiddle with so I could give you even more detail, but time waits for no man!  This product is going to hit the scene like a Thunder Hammer, and I predict much success for the fine folks of TableWar.

So, what’s your feedback?  Thoughts?  Comments?  Hugs and gropings?