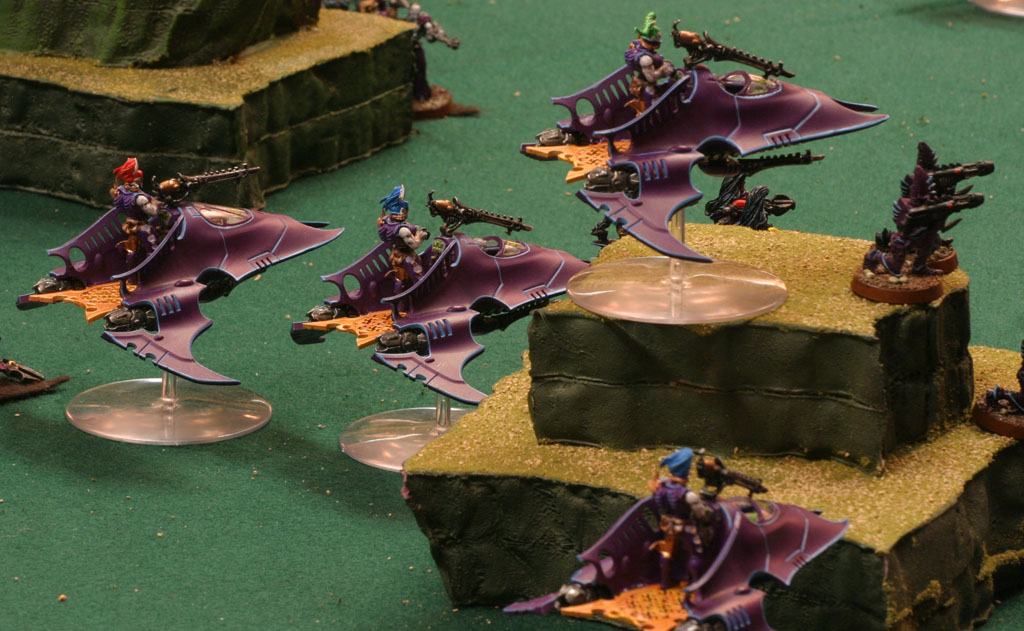 I am currently releasing a short series of tactical articles on Dark Eldar. I have been experimenting with a new style of play that has been doing fairly well so far.

Before I go into the specifics on an exact army list I’d like to cover the main problems I encountered with my original build and also what I identified as problems for the codex from the other side of the table playing my Draigowing army.

Why a New Dark Eldar Concept?
The main problem I had was effectively dealing with Grey Knights. If you are a competitive gamer and play in tournaments this has to be effectively addressed as Grey Knights are very popular now. Another army that was problematic for me was Deathwing. I think Deathwing can be more easily solved than Grey Knights. The main problem for me versus Grey Knights is first the psyflemen and second the massed proliferation of psycannons. If Grey Knights can move the bulk of their army into the midfield the psycannons are very hard to neutralize plus the psyflemen can hang back on their long table edge and have range to a large portion of the battlefield. Each psyfleman can effectively drop one skimmer each turn with average dice rolls – so if you are up against a Grey Knight army with three psyflemen over the course of three turns they can easily remove nine skimmers from play. To take out a psyfleman you pretty much have to dedicate one unit that is sacrificed in return and hope you can penetrate it’s hull and either wreck or destroy it. It’s not a good trade off and there is a good chance you’ll not remove the psyfleman. You can dedicate more units to increase your odds of removing the psyfleman but that’s not an option I want to invest in as on the flip side you are placing more of your army in harm’s way. Therefore the approach I’m exploring is to build an army that is less vulnerable to the psyflemen – the best approach I believe is to move away from a fully mechanized army towards a build that has more infantry. One advantage to this approach is that you will also negate the strengths of some other top tiered armies as well such as Space Wolves missile spam. You’ll still need some mech though so I’m not advocating a Webway Portal army or one that is composed fully of infantry.

The main strengths of Dark Eldar are as follows:

Superior Mobility
If you can design an army that is not vulnerable to psyflemen while still exploiting your speed then you have maintained one of your primary advantages while removing one of your main obstacles. Your transports can put you in a position to take advantage of your other strengths so by divesting yourself from a heavily mechanized army you’ll still need to be able to utilize your other methods of fast movement such as fleet of foot. Versus an army that is primarily composed of infantry in many regards a psyfleman is no better than one Space Marine with a heavy bolter. The psyfleman has better range and can inflict instant death versus T3 multi wound units but neither of those are big advantages versus Dark Eldar in general if played right.

Poisoned Weapons
No other army except for Grey Knights can produce as much infantry killing firepower as dark eldar. The one major weakness of poisoned weapons is they are harmless versus armor so the trick is to first demech the opponent if necessary so you can saturate their infantry with your massed poisoned shooting firepower. Trueborn armed with blasters riding in Venoms fulfill this role well but I’m not going to adopt this approach as I see it has having some serious issues versus certain popular armies such as Grey Knights. I do still like Trueborn though and believe they can be better utilized by fielding them in large units taking a roughly equal mix of blasters and shardcarbines. In many ways Trueborn can be the equivalent of Sternguard if properly designed. They will still need a transport to move them into effective positions so I’m planning to run them in raiders versus the Venom. You’ll get back the high level of poisoned weapons firepower through the use of the shardcarbine and you’ll still have the same number or even more blasters per squad. The other key unit is large squads of Warriors on foot. I’ve always been a big fan of Warriors as I have found them to be highly tactical. You can still take one blaster per squad and a blast pistol if you want to invest the points so they still have some limited use versus enemy mech.

Darklight Weapons
Mech is still kind for now and the best answer to this that can be fielded in large concentrations are blasters and dark lances. I have touched on how to still maintain a solid amount of blasters above through the use of Trueborn. You don’t have the range of the dark lance but you have a higher rate of fire plus you can move and shoot. Scourges are a fast attack choice so they don’t compete with Trueborn for slots in your FOC – they are highly mobile and have access to blasters, heat lances and haywire grenade launchers. They come stock with shardcarbines so like the Trueborn they can fulfill dual roles. The Ravager is also a good choice obviously and is a real bargain for the points – this is your best choice for heavy support.

Melee
You don’t need a lot of dedicated melee units but it’s still good to have a couple of these units to use for counter assault. Incubi compete with Trueborn so if you field a squad you’re cutting down on the total number of blasters you can field in your army. Wyches on the other hand are a troop choice and have access to haywire grenades so they can also fulfill dual roles as well. The more versatility each unit brings to the table the more reliable is your army. I’m actually planning to run one squad of Incubi and one squad of Wyches. Incubi can quickly remove a dedicated enemy melee unit such as assault Marines so I still see them as having a good amount of value while being only good in one aspect… They are only good in melee but they are very good in this role (of course).

I have presented some of ideas for rebuilding my current dark eldar army pointing out the reasons for these choices. The goal is to build a new army that is better designed to deal primarily with Grey Knights. That’s all for now.  What do you think of the concept? 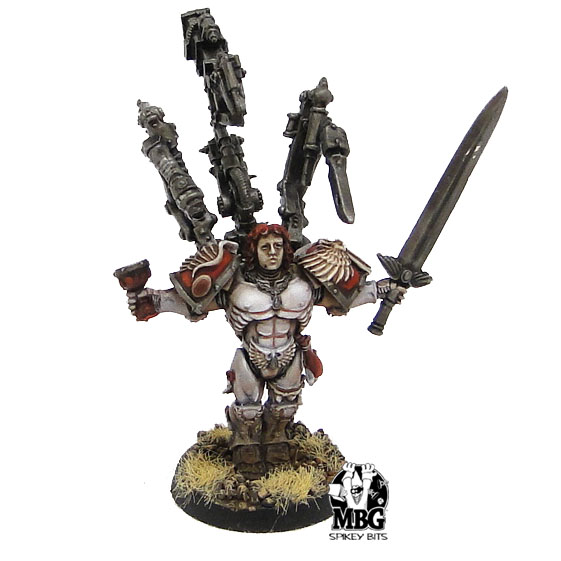