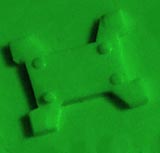 Every Mekaniak, from the lowliest Spanna Boy to the biggest of Big Meks, has his own particular way of looting. Here I will discuss how I go about turning Imperial tanks into rides fit for an Armoured Krumpany.

When I loot a tank I have a number of loose guidelines which I work to. These aren’t hard rules I stick to, but more a framework I can work within and which can be bent or broken if I really need to.

1. Have a flexible plan.

I find it is best to have a rough idea of what you want to achieve before you start. It may be little more than ‘enclosed hull about 10mm in extra height, big turret at the rear and a small turret on top’, it is enough to get you started without limiting you at the same time. It is important that you keep this plan flexible – rather than getting frustrated at not being able to produce exactly what you had imagined in your mind you can go with the flow and change the design as you go along. Having a starting plan gives you a direction to set off in while keeping it flexible allows you to alter the destination you end up at. Sometimes I may do a rough mock up in card as this gives me a good starting point when it comes to how big to make the basic shapes, but once I have it roughed out it is scrapped and as the build begins the design grows and alters. 2. If in doubt just go for it.
In every build I will at some point hit a moment of indecision. Often this comes at a point where glue is involved – ‘if I glue this will it work or will it stop me being able to do something else later?’. In the end I just do it, if it doesn’t work I can either rip it off or modify the design to suit. It is better to spend a bit of time to rectify something than wasting a lot more time procrastinating. Many times during while building the Deffstrike Rokkit Launcha I hit a wall of indecision, the ‘what if’s’ can be a nightmare on a build that has moving parts and a number of pieces that have to work together. In the end though you just have to say ‘bugger it’ and just do it.

Advertisement
3. Mistakes are fine.
If things do go wrong and a mistake is make it doesn’t really matter. These are Orks. Any mistake can either be incorporated into the design or rectified, Extra plates can be added to cover up gaps if things don’t quite fit while some mistakes can be turned into battle damage. Ork builds are very forgiving; there isn’t a mistake that can be made that will result in the model being scrapped.
4. Varied texture.
Subscribe to our newsletter!
Get Tabletop, RPG & Pop Culture news delivered directly to your inbox.
By subscribing you agree to our Terms of Use and Privacy Policy.
While the majority of a build will be in styrene sheet it doesn’t have to be plain. Adding elements of treadplate, siding, mesh and varying the thickness of styrene break up the flat areas and make them much more visually interesting. Don’t throw anything away as at some point you will find a use for it. Even small offcuts of styrene can be put to use as dags, glyphs or small plates on the vehicle hull. While any offcuts of rod or tube will eventually find a use. Build up your Bitz Boxes as leftover bits are a great resource. Scale model kits can also provide useful pieces, so if you have any keep hold of them as they may just provide that missing piece you are so desperate for one day.
Advertisement A few road wheels, a couple of chimera hull heavy flamers and five chimera lasguns from the bits box provided the bulk of this KFF. The styrene discs were punched from small offcuts of styrene.

It is often the little details that can turn a good conversion into a great one. The little touches that breathe life into a model and draw people in to look closer. Adding crew, hatches, glyphs, battle damage, weld lines, ‘gubbins’ and internal detail add a huge amount to the look and feel of a vehicle that you should be spending more time on detailing the build than was spent building the basic shape.
7. Keep it sensible, for an Ork.
Ork allow you to be very creative and to incorporate pretty oddball ideas. But I always aim to keep the tank grounded in reality (though in a reality set 38,000 years in the future where a fungal based alien race go around knocking the crap out of each other). By keeping things sensible I mean you should always keep in mind the practical implications of anything you add; gluing something back on for the thirtieth time after it has once again broken off during a game will start to seriously take the shine off something that seemed such a good idea originally.

I think that just about sums up how I go about looting, regardless of the base vehicle – from a second hand Leman Russ to an unbuilt Baneblade I go about the job in the same way.

If people are open for more Looting from me I will do a follow up article showing every stage I go through looting an old Chimera.

What do people think? Has anyone got any more ‘guidelines’ they use when creating a looted vehicle they could add?

Forgeworld Mystery: Is That What I Think It Is? 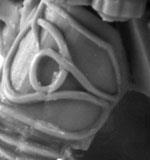