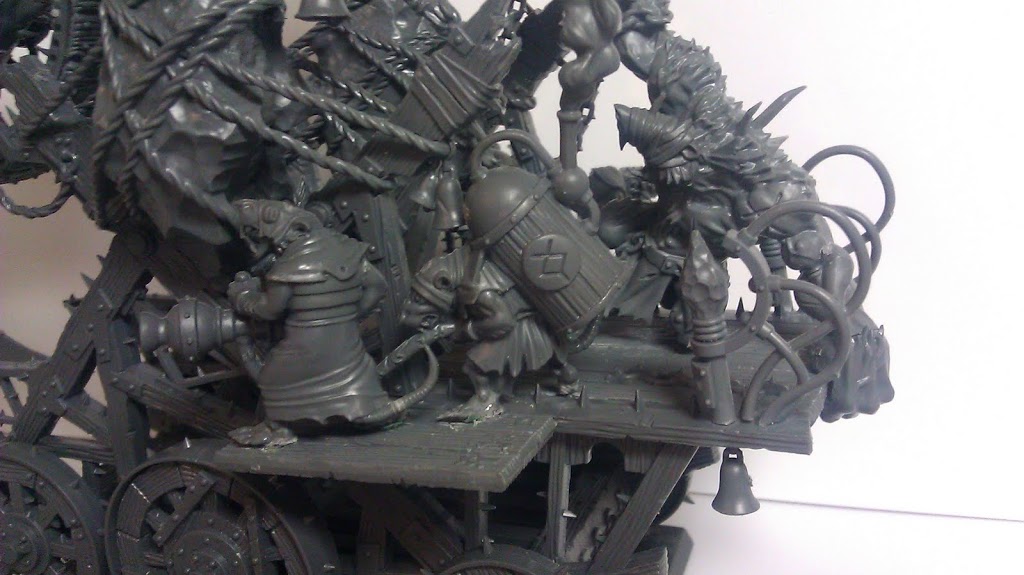 Let’s take a look at some Skaven Fun.

“It’s a dead game, you know that, I know it, everyone knows it.”

“No, it isn’t. It’s fun, I had fun while playing it. There were explosions.”

“The magic system is broken, it’s not as tactical as it used to be. Just look at the internet, it hates Fantasy.”

“The Internet hates everything except ponies.”

Ahem, Mr. Black here, dear readers, and as some of you may remember from last time I recently started playing Warhammer Fantasy again- and I can honestly say it’s been some of the better times I’ve had recently, thanks in no small part to an army that is quickly becoming my favorite as far as style and substance goes: The Skaven.

Why do they appeal to me do? Well upon discovering Clan Skryre and their unique form of Technomancy, combined with the fact that, as a Skaven player, I am duty-bound *snicker* to not only think of my troops as fodder but encouraged to do so at every turn. I spoke about it some time ago in my “What’s Your Playstyle?” article, so I won’t get too much into it here, but long story short: Some generals reward their troops for success… I punish mine for failure… and sometimes success…

*Those in the know will instantly peg me for the few non-Skryre entries there, but I assure you, there is justification (well…sorta…).

So, what do we have? Well we have a wealth of expendable templates to hurl around and lots and lots of shooting and magic- Such a fun time; Let’s commence with the unit breakdown:

Grey Seer and Bell (Accompanied by the Chieftain and Lv. 2 Warlock Engineer, plus 33 Clanrats):  This is the focal point of the army, containing both our General (The Grey Seer) plus the BSB. Frankly, when I set out to make this list I knew I wanted heavy magic, so a Grey Seer was a near auto-include. The Bell? Well it is a Skryre warmachine, but more so it creates a nice Unbreakable unit to anchor my forces around, not to mention giving the Grey Seer an impressive 18 inch Command Range should not be ignored.

The last benefit is something a lot of people also overlook: The Bell is a Unique Mount for the Grey Seer, meaning just by existing in the unit he causes them to be a Unique type as well, meaning no Stops, Thunderstops, etc, as well as making it so the opponent must kill both the Bell and the Seer in order to claim points for either. Has the Bell done something amazing each and every game? No, but it has always done something at least useful, and I fully believe it is worth the high price you pay.

One thing some may be concerned over is including the General and the BSB in said unit, the basic “eggs in one basket” approach- to that I will say this: Usually the Bell will be in the back of the mid-field, usually parked behind the Plague Furnace, and I have yet to have a unit plow through the Plague Furnace and be able to put up enough of a fight to harm the Bell- should that happen, I’ve probably lost anyway.

Speaking of the Plague Furnace Skryre War-Pendulum I have to say this is quickly becoming one of my favorite units. To start with it carries the same “Unique Mount” rules as the above-mentioned Bell, as well as the Unbreakable rule, now add in the fact that, while formidable on it’s own, it is being escorted by a full Horde-Formation of Plague Monks (complete with Plague Banner) and you can see the ridiculous number of attacks the unit can spill out per turn. While the Bell acts as the anchor to the army this little unit is defiantly  the hammer, moving in front of the Bell to keep it safe while at the same time presenting a major threat to most any other unit on the table.

Next up we have the cavalcade of Warlock Engineers, who, bar the Lv. 2 (to some extent) are there to go forth and die. Given that we’re going Skryre it should be noted the Grey Seer will know three spells from the Lore of Ruin (Plus Dreaded Thirteenth, of course) while the Engineer knows Warp Lightning plus one more spell, ideally Crack’s Call so he can get Skitterleaped to the backfield and go Warmachine hunting. The basic plan is roll the Grey Seers spells, sort them all out, then roll the Warlock’s, odds are he will repeat one of the Grey Seer’s choices and thus be able to take the aforementioned Crack’s Call (the Grey Seer switching it out for the Dreaded Thirteenth should he roll it). I won’t always go that route, it just depends on what I’m against.

The rest of the Warlocks are item holders, the Death Globe going with the Poison Wind Globadiers to provide an extra throw while the Brass Orb carrier will get Skitterleaped to a prime target (Steam Tank). Yes, the odds of all my items backfiring is pretty high, but hell, that’s half the fun of Skaven, now isn’t it?

The troops are the usual caveats, lots of Clanrats to whittle the opponent down, two decent sized units of Slaves to hold the enemy up (as well as fire wildly into… Trust me, I am not afraid to line up a Warpfire Thrower right in the center of the unit and “hope” I get a good distance on my roll).  Not much to say about the Core really, it’s Skaven- large numbers to hold the army up while your small number of actual damage-dealers do their thing.

Next up we have the Poison Wind Globadiers- a unit I know some don’t care for… And… Well yeah, I can see why. Point for point I think they are a bit much, and if that Death Globe doesn’t hit well I am a sad panda… But they really shine when you see a big scary monster sitting in the opponent’s deployment, and they aren’t bad at hunting Warmachines. Basically out of all the units in the army these guys come the closest to being “hit or miss”. They do well when they want to and are always the first to blow themselves up when I need them most… Skaven to the very core.

Lastly we have the Warp-Lightning Cannons, which are probably the deadliest thing in the army, as well as the bane of many, many players. Arguably the strongest cannon in the game (and a steal for the price) the cannons really rely on the player knowing how to use them. Basically, unlike most other canons in the game, the Warp-Lightning creates a small blast where-ever the shot finally lands, and seeing as how the strength of the blast is equal to the second number on the Artillery-die, it means you’re going to have anything from a S:2 to a S:10 hit, any of which ignore armor saves. The basic tactic is surprisingly easy- just place the initial spot you want the shot to land at twelve inches from the center of a unit, working out that the average distance on two artillery dice is twelve and, usually, you will land somewhere near the center of a unit, or at least close enough to do some serious harm.

And that really about covers it, dear readers. A fun army full of lots of BOOM! I’ve been testing it a while and really narrowed down the focus for it- initially running units of Jezzails (not worth it), Gutter Runners (nice but just not my style) and various formations of Skavenslaves; tried lots of options and different things out, but in the end I’m happy with the above list.

Oh, and on the topic of Skryre “Count-As” Warmachines… The Skryre War-Pendulum! Ahahaha! Also be sure to keep an eye on the Dark Corner of Gaming blog for the “Skryre Techno-Fanatics” coming soon. In the meantime, here is a Hellpit Abomination, as every Skaven post must at least mention one in some degree: Until next time, dear readers, Mr. Black signing out.

~Skaven truly have some weird and wild options available to them, most of which can backfire spectacularly. What are your stories involving the better (and worse) moments of the Skaven?