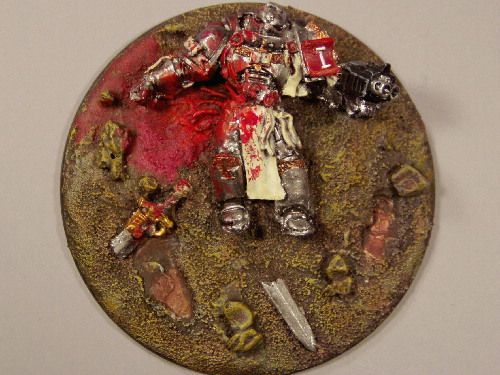 I recently read an article by Fritz on how to use his Null Zone tactics for Tyranids. As fickle fate would have it I was the ringer in a local tourney playing Tyranids this past weekend.

The Tyranid list I played was a reserve army comprised of the following to the best of my recollection:

It was an army I borrowed from a friend who was playing in the RTT to use as the ringer army. I like the list in principle but would have tweaked the Trygon to have adrenal glands plus I would have kitted the Hormagaunts with toxin sacs and adrenal glands as well. I haven’t played Tyranids in a long time so I was a bit rusty and made a few mistakes over the course of the day which is to be expected. Two of my three games were versus Grey Knights… Yes all you haters out there I can feel your pain – and please note the distinct lack of FNP in my army (that was supposed to be humorous).

I noticed some interesting facts in general about Grey Knights that I’ve missed before now – fighting them with a weaker list can be a good learning experience indeed! I think we all know that Tyranids got the short end of the stick in this edition but I’m certainly not here to gripe. In general Tyranids don’t match up well versus GK but they do have a few key advantages such as Shadows in the Warp. The last game was versus the army that won best overall so I’ll mostly focus on what I learned during that game. Note this isn’t a batrep per say – I’m simply reporting my tactical findings to hopefully help others.

Null Zone Tactics
I talked about Null Zone in the beginning and I’m not referring to the SM psychic power – like I said I’m referring to a recent article by Fritz over on his own blog. It’s hard to beat Grey Knights in close combat when they are at full strength because they have so many advantages and it’s really hard on Nidz for all the obvious reasons. That said though Tyranids are kind of like bears… The small ones might at first look cute and cuddly but there’s lots of them messing about and there is certainly going to be some really big mean ones close by… So here is the thing – Grey Knight armies tend to be small so they can only cover so much ground. You can make them pay in objective based missions such as Seize Ground or Capture and Control. Also most of their units tend to be slow. If they castle it’s important to take control of as many objectives as possible early on and force them to come to you.

Spread Them Thin
So right off the bat resist the urge to immediately engage them in melee… Your assault units will invariably die in droves if you carelessly do so. It’s much wiser to force them to spread out to the point where they can no longer effectively support each other. You should play keep away initially and well into the mid game if necessary. Whatever shooting you’ve got should be focused on slowly weakening them over the course of the game. I used the Termagants and the Trygon Prime to soak one squad of Terminators in the last game. The Termagants died the following turn after they arrived but on the other hand their sole shooting phase inflicted some damage. I kept the Trygon Prime out of melee until the end of the game so he could shoot as much as possible and this helped as well. The final big assault focused on the Hive Tyrant, Hormagants and the Trygon Prime charging a remnant squad of Terminators with a Techmarine attached. I was able to wipe them all out except for the Techmarine who lived by the grace of his lucky warding stave – hey it happens sometimes. The next turn these units of mine were wiped out by a counter attack from a full squad of Terminators lead by a Librarian but this forced them off of an objective marker and because of this I won the Seize Ground Objective by a slim margin of 2 to 1… The Warriors held one while a squad of Genestealers held another. The other squad of Genestealers held their own Capture and Control marker to force a draw on that objective. Typically I’m all about aggressive tactics but these generally just don’t work well versus Grey Knights.

Make sure to spread out the objective markers to force your opponent to break up his castle. What you really want to do is isolate the Librarian so his psychic powers can’t augment other units he is not attached to such as the Strike squads – if you can negate Sanctuary that is a really big help for your melee units that can’t take grenades (such as every unit in the Tyranid codex).

Slow Death by 1,000,000 Small Cuts
Something else I noticed is that just like how Space Wolves Thunderwolf cavalry prevents you from running amok amidst the Grey Hunters the big bad Paladins are there to protect their weaker brethren such as Strike squads. You can expend a lot of energy trying to get at units such as the Strike squads but to me that’s mostly a wasted effort unless they are out in the open deployed away from the bulk of the Grey Knights army… This can happen if the GK player is using their Warp Quake to deny your deep striking units so always keep an eye open for these opportunities.

By turn four it’s time to start looking for opportunities to finally assault and you’ll want to hit them with the bulk of your army. If you’ve done it right those Paladins have suffered some wounds along the way and are no better at surviving in melee than Grey Knight terminators (except for WS5 of course). If you hit them with enough attacks they will fold and then you are looking in at those juicy little Strike squads.

Conclusion
So that’s it for now. It’s going to be extremely difficult to beat an army such as Draigowing at killpoints but if the game is decided by objectives then it can be done. Force your opponent to spread out and weaken them over the course of the game finally engaging them during the very end game to punch through their overstretched forces for the win.