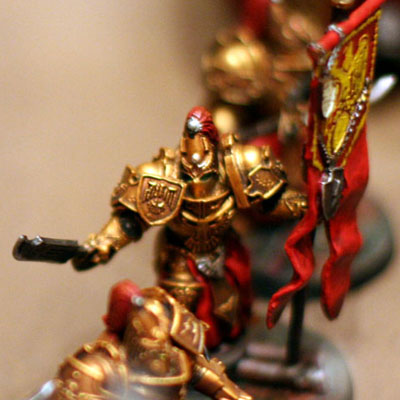 Take it away C.J. –
Hi Guys and Gals!
I have always loved theme armies based off the background of Warhammer 40K.  In fact, I can say that the background is the biggest things that drives my armies and continues to keep me in the hobby. One of my favorite areas is the Horus Heresy and that is one of the key things that first drew me to Bell of Lost Souls.  A big inspiration was the “Visions of Heresy” art book.  I built a pre-heresy Word Bearers army, but I always had my eye on the Legio Custodes.  For those of you who don’t know who they are.  They were the Emperor’s personal bodyguard and traveled with him everywhere during the Great Crusade. The new Grey Knights gave me the chance to build them when it came out last Spring. I started them this summer and there first appearance was at WargamesCon in Austin this summer.  I used the Scibor Roman style models to build my main Custodes and the Emperor.  I later added the line guards which are made from Games Workshop bodies, Forgeworld bolters, Chapter House Studios heads and Scibor shoulder pads.  The newest additions are the hover Rhinos (the Emperors Gift), the Forgeworld Contempter dreadnoughts and the Primarch Sanguinius (also a Scibor model).  I hope to soon add the new Forgeworld Heresy era Land Raider! I use these models with the Grey Knights codex.  Mostly paladins for the big guys and purifiers for the little guys.  I use Draigo for the Emperor and a Librarian for Sanguinius.  It’s a pretty simple list that has actually done very well.  The weekend of Feast of Blades I made it into the top 8 bracket, but was smashed in that bracket by Goatboy and Darkwyn.  Overall, it is a fun army to play and keeps me inspired to add to it.  Aside for the Forgeworld Land Raider Proteus, I would like to do some more Primarchs and some pre-heresy Astartes from other legions.

If you would like to see more of my work check out my good friends blog rumorsofheresy.blogspot.com  I occasionally post there when I get the chance.  Thanks, to Bigred for giving me the opportunity to show off my work!

Author: Larry Vela
Dad, Gamer, Publisher, Pilot, Texan. All games all the time since junior-high. I started BoLS Interactive in 2006. I’m a lifelong tabletop & RPG gaming enthusiast, and internet publisher working to entertain and inform my readers every day. I've been playing RPGs and Tabletop Games since the 1970s. I'm been playing and covering Warhammer and Warhammer 40K for over 35 years.
Advertisement
Conversions Grey Knights Miniatures Painting Warhammer 40k
Advertisement

Goatboy - Focusing his Single Eye on the Prize