Goatboy – Focusing his Single Eye on the Prize

Goatboy’s back, continuing the discussion of the new Necron book. Personally I am not feeling it and most likely won’t be making an army of silver, rusted, goat headed, or chaotic robots.

It just doesn’t fit my style – Rock style shooting mixed with the ability to do a kung-fu punch in the junk.

So instead of chatting about what kind of new army I want to unleash on the interwebs I will instead chitchat about what the older armies are going to need to do to keep up with the robots not in disguise.

Razorspam is in some ways dead as the Scarabs are going to do a number on any massed boxed army. You will need to be driving 12″ with all your boxes and losing that turn of shooting is going to hurt. So look for less overall Razorbacks that clog up the front of the board. Also the undercosted Dreadnoughts are going to be in trouble as those pesky metallic bugs roll over them. Look for a change in the army design that echos some of the nonsense I have been throwing around with utilizing a Paladin/Terminator bubble wrap – midfield control option. Jumping Dreadknights might be worth it as you shoot forward and get stuck into combat quickly. Winning by 3 to 4 will put a hurt on any unit as you get a chance to kick them in the butt as they run away. Your Storm Ravens and Land Raiders will not be living long as they covered in green energy so look for some foot options to become a lot more viable.

Next up let’s check out the Dark Eldar.

All the Necron’s guns are going to be bad for them. Glances are basically AP 1 for all the DE vehicles so any ability to mass produce lots of shooting is going to hurt. Mix that in with the ability to get two rolls to ignore the massed Poison spam we see and we have an army that might survive the storm of pointy earred S&M freaks. Wyches are going to be important as a way to hold off the Swarms with the 4+ inv save and most likely their 4+ FNP save. Get a unit stuck in and hold that bug swarm off too. As usual assault will be the key for your victory and we might see a change into more Beastmasters and other – long range assault units. A WWP army might hurt too as they can get up in the middle of the board and touch a Necron army anywhere.

We got Blood Angels next.

Blood Angels are the king of Razorspam. The only army that can move 12 and still shoot effectively. Scarabs will still hurt them but your Termies plus Mephiston will do a number on them. Watch out for Mindshackle Scarabs as Meph could be turned off for a round. Again you will need to put the hurt on the army instead of relying on sitting back and just rolling some D6’s. You need to come forward fast and furious and engage the enemy. You have your own Reanimation Protocols with the bubbles of FNP from the Vampire Sippy-cups of doom. They are the only Mech army I feel doesn’t scare as much as you can easily push forward. A Blood Talon Dreadnought will make short work of a Scarab unit so throwing one out of a Storm Raven might do some good as you zoom around shooting things.

Lookout!!! Bugs are going to be mean to them.

Tyranids are going to do a number to the Necrons. You don’t care about glances and you are much better in assault with them even without grenades. Look to lots of outflanking Genestealers doing nasty things to metallic bodies. If I were the Crons I would load up with your armor 13 and hope for the best. Tie some of the worst assault units with the Scarabs and just try to play the sit in cover bolter game as best as you can.

IG will need to change up their game.

Scarabs are going to hurt Chimeras. With the large foot print of the metallic bugs mixed with your very large army size you might start to see more Platoon blobs covering their tanks up. Autocannons will drop away for more Lascannon squads too as you need them to get rid of their magical shielding. I see at least 1 to 2 blob squads mixed with Straken hiding behind as well as some Hell Hounds and other bits of mean shooting. Really IG will just need to change up a bit and things will be alright. The Psyker Battle Squad will be a major threat to the robots as their “minds” are filled with images of rust – or a 2.

Space Wolves will have to do small tweaks.

Wolves are at an interesting position as the normal MSU build you might see will have to change up. Massed Missile Launchers will have to change up a bit as you need some higher strength punch options to get rid of shielding. Meltaguns and assaulting will do the army good and I am sure we will see some game where a Thunder Wolf group will just run through an army as massed 3+ saves are a pain in the butt to deal with. The massed Razorback spam you see might go away as LoganWing gets better as more foot options become interesting.

Hrm an assault based army versus a shooting army. Well if you survive the shooting phase you should be able to get in close and put some damage on them. Look for the flying walls to be utilized as Daemons still have a tough time with Armor 14. Fiends will end up being the key to victory for the Daemons as their ability to touch anyone on the field at times will usually be too much. Necrons will have to utilize their Scarabs to hold off the rush and try to punish with withering firepower.

Codex Marines Smurfing it up.

This army will be hurt a bit as most of the time they rely on their vehicles to pull themselves ahead. Yes the Thunder Hammer termies can ride a win through but just the sheer amount of firepower mixed with the lack of staying power for an assault will mean those termies will beat the crap out of one thing and then have to take a ton of saves to hopefully survive. Really SM won’t change a whole lot as they just continue to play the game of efficient options across the board.

Orks are looking long in the tooth. I would say that you should close your Battle Wagon tops off and just go for the – move 13 and roll a d6. Your Nobz are going to crush whatever they hit with their massed Power Klaws. Watch out for the difficult Terrain C’tan as that guy will most likely live for awhile and cause massive amounts of damage as you try to get into range to engage. Your Big Mek will be your friend as well as Ghaz’s ability to automatically grant a 6 on the fleet.

Surprising Lash is still super good. You ring up them robots and cover them in hot plasma death – is not a terrible option. The assault elements are good too so Chaos is not too terribly off. It is just boring. Watch for Abbadon to get Mind Scarabed all the time. Then he rolls a 1 and you have just completed the triple poopy face.

Dark Angels are going to grind them down.

A 3+ inv save is hard to deal with. You are going to shoot the crap out of them and hope you don’t roll lots of 1’s. Just deep strike in, walk forward and roll some dice. The lack of true tanks makes the Dark Angels a mean army to play against. Mix this with having to kill every single model in a squad and you have an uphill battle for the Necrons to fight against.

Black Templars or “the FAQ codex”.

Get in assault and call it a day. Move forward, reroll your hits, and crush or chase off those metal jerks. The Dual LR build that Darkwynn likes to play might have issues as massed Glances will eventually grant a 6 that even their Dozer blades can’t stop. Their terminators are going to crush most things they hit so just get them in the mix and watch the metal fly.

Tau are just waiting to “retake” the shooting mantle.

Tau are going to sit and shoot and shoot. So look for the shooting gallery to happen when you play this army. Having your vehicles always be in “cover” is a huge advantage as you should take away a lot of shooting hurt. Mix this with superior range and you are giving Necrons an uphill battle. Necrons will have to get those Scarabs working overtime as they mix it up with some Suits and hopefully cause some armor saves to magically disappear.

Eldar will continue doing the same thing – frustrating the internet with wins.

Eldar won’t change much and will continue to worry about the magical distance of Rapid fire as the Warriors get in range and pound out the Gauss fire. I can see a lot of the armies going for Tank Shocking Necrons off the board too towards the end game. Really I don’t see the Eldar players changing their game plan much as they patiently wait for Phil Kelly to give them new and more interesting love.

Sisters of Battle – We Can Do It!

Sisters will continue to play with their lackluster WD codex. Options should stay the same. Move up, pour out and turn on the bolters. The assault elements need to engage quickly and the Saint will continue to wreck havoc on the Necron back field as she falls again and then gets up and flamers some jerks off the objective.

Conclusions
The biggest thing I see the Necrons doing is to make players play less of the sit in boxes game we see on some of the tables. You will have to constantly keep moving to push the advantages your army has over the slower robots of doom. I really see the Necrons lack of true assault/anti assault elements to be a hinderance. I wish the Lychguard and other options had 2 wounds as it would make the unit 10X better. Right now I just see that box set as a conversion feeding ground for the Crpyteks we will see day in and day out. Moving, AP 2 Missile Launchers? Yes please may I have another!

What changes are you going to make to your armies with the upcoming Necron book? Anything major? Are you going to have to spend a month or two converting and painting up some kind of new hotness to crush these pesky metal robots without disguises?
Advertisement 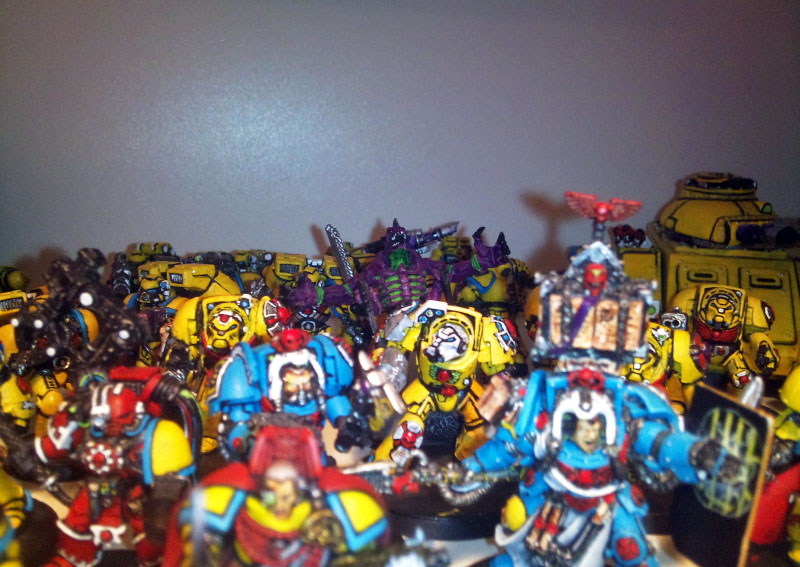