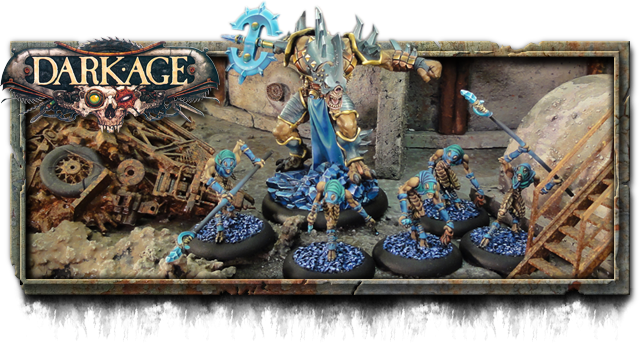 This is the first of three planned articles on Dark Age. This game has been picking up steam lately so I suspect there’s a good chance that many of you are just as curious about it as I was. I’ve had awhile now to go over the game’s new books: Core Rules and Force Lists. Now its time to share what I’ve learned.

After a little thinking I’ve decided I’ll cover the setting first. While game-play can make or break a game I think ultimately no one will play a game unless the setting piques their interest at least a bit. And of course the miniatures are important so I’ll be sticking in a bunch of pictures of them. Many of you may have heard of Dark Age before now. This post-apocalyptic skirmish game with an extra helping of GrimDark has been around for at least a decade. My understanding is that it began with no ruleset as a miniatures line based off of the artwork of Brom. Dungeons and Dragons players should be familiar with this artist as he did a ton of work for TSR in the eighties and nineties. In particular the Dark Sun campaign setting takes its aesthetic almost entirely from his imagery. The inspiration for Dark Age however was taken from Brom’s dark science fiction work – a strange mix of bio-horror, rusting technology, and bondage leather. But as the line grew it appears they ran out of Brom art to turn into miniatures and expanded the setting with the contributions of many other artists. At this point many Dark Age miniatures seem to have nothing to do with the game’s original inspiration. In fact most of my favorite sculpts in the line are those designed by these other creative souls. The setting for this game needed to accommodate the various characters from Brom’s work in a way that made at least some sense. To this end we have the world of Samaria. An isolated and barren planet tucked away on the fringes of earth space. During humanity’s golden age, those characteristics made it the ideal place for all sorts of illicit activity. Of these activities, the ones that we’re the most interested in are the illegal experiments in bio-engineering, cybernetics, experimental drugs… that sort of thing. The once prosperous world was laid low by a catastrophe that strikes a little close to home. It wasn’t a plague, a meteor, a nuclear war, or an alien invasion that damned Samaria’s populous. It was an inter-galactic economic collapse. The planet’s wealthiest inhabitants fled with whatever valuables, information, and key employees they could carry leaving millions to fend for themselves. On a planet where most of the food and water necessary for survival were shipped in from off-world, the result was chaos. Fighting broke out on the streets as men slaughtered one another for the most basic necessities for survival. In six months the planets population had been reduced to a fraction of what it once was. Fast forward a few hundred years and we find the Samaria of Dark Age. Humanity has begun to crawl back. Agriculture has been rediscovered and life has returned to something sustainable. The remaining usable technology is random, anachronistic, and available solely based on what facilities survived intact over the years. While some high-tech weapons remain they are scarce. Human soldiers are more likely to be armed with a sword or club than a modern firearm. The Forsaken faction represents the largest and most organized group of humans on the planet. A recent wave of religious fervor has helped to unite this large group of dispersed communities into something resembling a traditional nation. Certain exceptional and ambitious individuals have elevated themselves to positions of power by taking advantage of this revival. The Forsaken heroes known as Saints have managed to convince a gullible populace that they are in fact the reincarnations of similarly named individuals from ancient scriptures. Armed with the finest weapons and armor, the Saints lead devoted Forsaken armies on crusades against enemies in far away lands. With no formal centralized military institution among the Forsaken, each saint has access to unusual troops unique to their own individual forces. As the fledgling Forsaken civilization grows, its survival depends on these heroes pacifying the lands outside of its territories. The Dragyri are an alien race that are no more native to Samaria than the humans there. They are the descendants of a highly advanced civilization that built a massive warp gate to the planet millennia ago. The gate collapsed causing an ecological catastrophe that was ultimately responsible for the harsh environment still found on the planet. The Dragyri survived by taking refuge in a vast interplanetary network of caves. In this subterranean environment an entire ecosystem exists nourished by huge deposits of the energy charged crystals that brought the Dragyri’s ancestors to the planet in the first place. In the time since the gate collapse the warrior class has become ascendant, lording over their former masters who have degenerated into the perfect willing slaves. Martial perfection has now become the primary aspiration of the “Trueborn” as the warrior class have come to call themselves. These beings have also developed powerful psionic abilities over the ages and can call upon awesome elemental powers in battle. Different Dragyri castes are devoted to the mastery of different elements. These castes are just as likely to war on one another as they are to co-exist. Currently the Ice and Air Castes are the only ones represented in the game, but a Fire Caste is mentioned overtly in some of the fluff. The Dragyri have only recently become aware of hostile beings on the planet’s surface and are now engaging them on all fronts. The Skarrd are a savage and abominable off-shoot of Samaria’s human inhabitants. They began as Pariahs who refused to embrace the spiritual transformation that was taking hold of their communities. Exiled to the inhospitable fringes of the human settlements, the growing population banded together and departed into the wastelands in the hopes of finding somewhere they could survive. What they discovered in the depths of the desert was a long abandoned scientific facility. Searching for food and weapons the survivors unleashed powerful mutagenic substances that permeated the very air of the compound. Many died upon exposure to these chemicals, and those that survived were forever changed. While a few were lucky enough to grow into massive powerful beings, the majority became gibbering savages barely able to keep their rage in check. Amongst these brutal beings a rare few were rendered incapable of feeling emotions. These “Tribal Fathers” are always accompanied by powerful telepathic abilities that help them in their capacity as the rulers of the Skarrd. Surviving through hunting, raiding, and cannibalism this new race eventually encountered another powerful enemy of the Forsaken. The renegade Saint Johann, exiled for his heretical ventures into the forbidden science of human grafting (cybernetic augmentation) encountered the Skarrd in the wastelands during his own exodus. He and his followers used their knowledge to enhance the willing Skarrd with powerful new weapons. As their power and population has grown, the Skarrd have begun to find organized resistance from the Forsaken and challenges to their power from the Dragyri. The Brood are a science experiment that took on a life of its own. Deep in the Blackmire swamp south of the Forsaken capitol are the remains of what was perhaps the most advanced scientific facility on Samaria. In this place the genes of countless species from throughout the galaxy were combined to manufacture biological military assets. Amongst them were the beings that would eventually come to found the Brood. These creatures were engineered to excel not only in physical combat but also in relevant intellectual avenues like logistics and strategy. Three of the most powerful were able to escape when the planetary infrastructure collapsed. Foremost among these was the being that would come to be known as the Broodmere. Designed to communicate with entire armies on the battlefield, this creature was imbued with tremendous psychic powers. This sensitivity ensured that it felt the pain and trauma of every failed experiment the scientists and technicians had dumped into the swamp before they abandoned the planet. And it didn’t stop. The unique biology of the Blackmire combined in a wholly unnatural way with the experimental chemicals and alien genes that now infused its waters. It had become a spawning pool for abominations. These creatures, now emerging in a steady stream, lived brief lives before quickly dying in agony as their failed biology betrayed them. To end this constant stream of suffering, the Broodmere used the abandoned facility to alter her own DNA. Her advanced mind allowed her to find a way to fuse herself to the swamp itself, halting the stream of nightmarish births. Over the ensuing centuries the Broodmere has used trial and error to master her control over the Blackmire’s bizarre abilities. Now she uses it to create armies of highly specialized soldiers; a new race bent to her will. Her original two companions, Helexa and Mean Jelly Bean (named for the original Brom painting), have been cloned countless times over the ages and still serve as her faithful generals. The Outcasts are composed of a loosely-knit group of human settlements outside the realm of the Forsaken. Like the Skarrd, the Outcasts have no desire to live under the intensely strict laws imposed by the ruling Forsaken council. For these hardy people everyday life is a struggle for survival. With enemies on all sides, any Outcast old enough to carry a weapon has to fight for their community’s survival. While their societal structure is largely tribal, they are just as familiar with advanced weaponry as the Forsaken and scavenge it at every opportunity. A few weaponsmiths among them are even capable of creating new weapons. The Outcasts are joined in their continuing struggle for independence by a race of genetically modified humans called Brutes. Designed for hard labor their strength and endurance makes them excellent allies. Their distinct physical deviation marks them as abominations to the Forsaken, whose religious beliefs allow room for no tolerance of corruption to the human form.

~ So there you have it. A quick look into the world of Dark Age. I’m going to do another soon on the game rules so keep your eyes peeled if the setting sounds like something you’d be interested in. And of course you can check out their site for some more info right now. Finally if anyone out there has played Dark Age, go ahead and tell us what you think of the game.

Author: Ben Williams
Ben Willimans is a Professional Painter and Columnist at Bell of Lost Souls. He has been involved in the hobby and art side of miniatures and the tabletop gaming industry for over 20 years. He has won multiple national painting awards.
Advertisement
Dark Age Lore Miniatures
Advertisement