Kraggi here with a Brief rundown of some basic rules & concepts for Dystopian Wars.

As I will be writing a series of Articles which will cover the different aspects of the game I thought it best to share a few basics of the game. This will hopefully help you understand some of the rules and concepts if you don’t play.
If you are interested in a full review of the game, here is a link to one I wrote on my own blog, and here is the one that appeared on this website.
So where to begin?
Well I figured I would start with one of the big things I will be mentioning during my posts. Range bands. When shooting in Dystopian Wars everything is based on Range bands. Each range band is 8”, and with up to 4 range bands in the game you are looking at a total of 32” threat range from some of your models.
Now I do mean some models, because in reality not every model in the game has weapons that can effect out to Range Band 4.
Spartan Games have been very good to players of Dystopian Wars with an Armoury that lists the locations of certain models Weapon Systems, mean its easy to figure out where you are measuring your shots from, or what fire Arcs each Weapon has. Moving on from Range Bands, I think its about time to talk about Attack Dice (also known as AD). These are how you damage enemy Ships / Tanks / Planes.
Generally each Weapon has a number in each Range Band for how many AD you get to roll for each attack, or they have a – meaning they cannot attack something at that range.

You can also, link, split and combine firepower, meaning you roll more dice at one go. Generally you get hits on a 4, 5, or 6. The 6 counts as two hits, and allows you to roll another D6, generating potentially more hits. If you luck is with you can sometimes generate a lot of hits from only a few AD.


This is called the Exploding D6 mechanic. Its what can alter whole games regardless of how bad things are going for you!

Now you have an idea about Range Bands and AD, its time to talk about you actually Damage an enemy model. Every model in the game has a Damage Rating (DR) and a Critical Rating (CR). Yes, my Sky Fortress is not doing so hot at this point!﻿
To damage a model, or Crit it, you need to get a number of hits equal to or exceeding its DR or CR. For me this is where Dystopian Wars (and Spartans other games as its not exclusive to Dystopian Wars) shines.
For example, you work out how many AD you get to roll in each attack. Once you have finished rolling your AD, including all the 6’s you count up the number of hits you have. Each 4 & 5 grants you 1 hit, each 6 grants you 2 hits.
If you exceed the targets DR you do 1 Hull Point of Damage, if you exceed its CR you do a Critical Hit to it, which involves rolling on the Critical hit table. If you were to double the CR, then you would get to roll on the Critical Hit table twice, treble it three times etc. The Blazing Suns Battle Ship, Ineffective until it repairs the Weapons Damage﻿


The Critical Hit table is nasty, rolling 2D6 and consulting the chart, with a double 1 or double 6 being equally evil! You can also end up with results that Cripple your Ships, Movement, Systems, Weapons, Marines! All in all you want to hope the opponent doesn’t get something nasty as it can totally alter the game!

This makes the nice rolling very quick and easy, there are things out there that can affect the score required to hit the enemy, generally modifying it to either a 6 only, or +1 or -1 to each roll (although a Natural 6 is nearly always two hits and an extra D6 to roll).
So there are the basics you need to know for the next few articles I am going to write.
If you have any further questions, feel free to drop me a comment below and I will do my best to answer them, Dystopian Wars has some awesome models & rules, so if you have never tried it before I strongly advise checking it out!

Author: Kraggi
Kraggi is a tabletop wargamer with over a decade of experience. His specialty is Warcradle Studio's Dystopian Wars. He began writing for BoLS in 2012.
Advertisement
Dystopian Wars Review
Advertisement 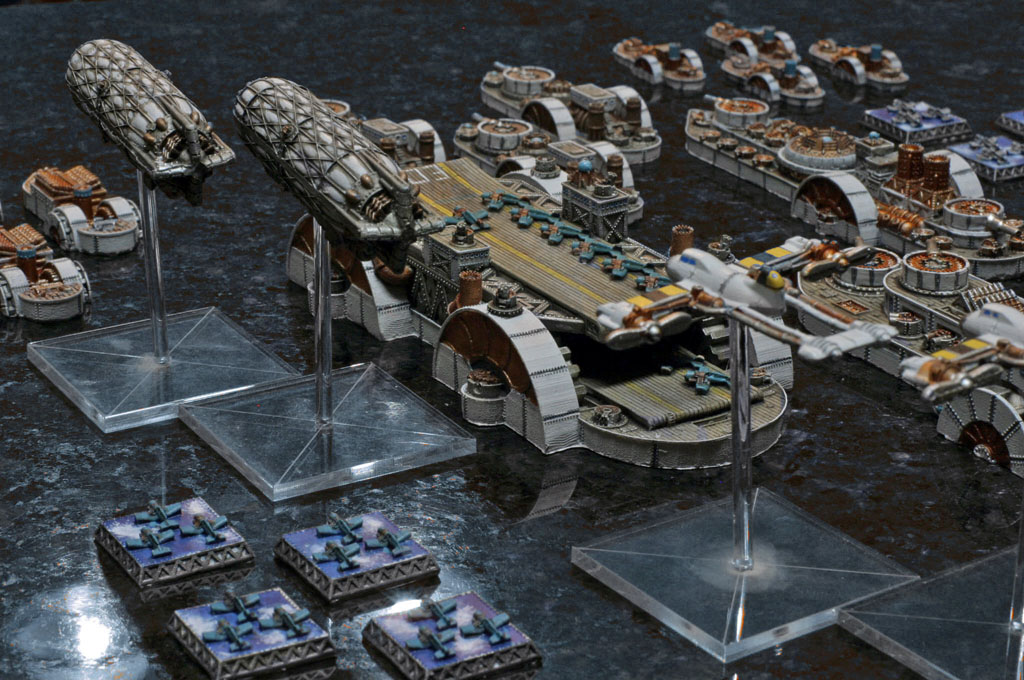