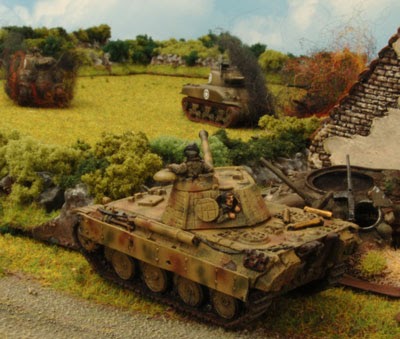 While any FoW player will tell you that German panzers are generally superior to most Allied armor, their true strength comes not just from their better armor or guns, but in the end-turn mobility provided by the German Stormtrooper Special Rule.

FoW is divided into three phases similar to 40k, with each turn composed of the Movement phase, the Shooting phase, and the Assault phase. And just like 40k, in the Assault phase, a player can choose to launch a close combat attack against an opponent. However, the German Stromtrooper Special Rule allows any German player to forgo assaulting a target and instead make a skill test for each of their platoons (which most German units pass on 3+). If this test is passed, then that platoon is permitted an extra 4” of movement, following certain restrictions with regards to the platoons Pinned Down status or if it moved At The Double or fired a bombardment,

While this ability affects every German Army unit, the units that benefit most are the German panzer units. Most German tanks already possess good mobility, have good armor, and have some of the best guns in the game, making them more than a match for Allied tanks. But it is their ability to move again, after having fired, that makes them on of the best units in the game.

Dubbed “The Panzer Dance” by my local gaming group, Stormtrooping German panzers offer a major tactical advantage that no other army possesses in FoW. Because FoW is an attrition-based game, the ability to do maximum damage to your opponents army while preventing damage to yours is the key to victory. Because German panzer units are some of the best in the game, they are few in number on the table and must rely on a quality vs. quantity factor in their games. While their tanks can beat most allied tanks 1on 1, this is almost never the case in a FoW games, where Allied units almost always outnumber their German opponents, sometimes as much as 3 to 1. As a result, German players generally must play an aggressive, but cautious game. They must strike decisive blows, but at the same time, protect their units from return fire. “The Panzer Dance” allows a German player to do just this.

“The Panzer Dance” tactic calls for a German player to move their panzers into positions on wood lines, hill tops, or other areas that provide excellent line of sight and good firing positions while at the same time providing escape routes in the form of cover or line-of-sight blocking terrain. After the German player has fired, they then stormtroop out of their firing positions and into cover or out of line of sight. In this way, a German player denies a return shot at his panzers from his opponent while doing maximum damage to his enemy. While not always guaranteed, the fact that the test is made on a 3+ (or better for some special units) means that the German player can confidently rely on this tactic working most of the time.

Using this shoot-and-scoot strategy, the German player can dictate the flow of battle and force their opponent to come to them. The “Panzer Dance” has become a popular tactic in my local gaming group, allowing a smart German player to wreak havoc against the enemy while safeguarding his own forces. While not always guarantee, the fact that this tactic is always an option for a German player leaves them a great deal of tactical flexibility on the table, something no other FoW army can do. So, what is your opinion of the German Stormtrooper special rule? Is it too overpowering, giving an already good army an over-the-top ability? How do you Allied players combat “The Panzer Dance” in your games? Comments and suggestions are welcome!