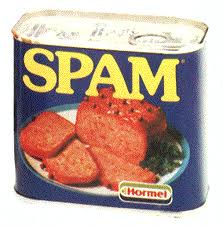 Reecius, with Frontline Gaming, back again with a break from the Crons to talk about that yummy list building strategy: spamming!

Spam. Some of us hate it, some of us live on it. But is it really as game changing as people would have us believe it is? As my father is fond of saying: “nothing is ever as good or as bad as it at first appears.”

I think that is especially true of this topic. For those of you who don’t know, or perhaps have another interpretation of what spamming is; it is the practice of taking multiples of the same unit in an army list. Troops, usually, don’t count for spamming. It sounds like a relatively harmless thing at first glance, right? Some people, however, have visceral, emotional reactions to it. As in: they truly HATE it. Others see it as a legitimate, and even the only intelligent way to play the game.
So what’s the answer, here? The answer is what the person asking the question feels it should be, as is always the case with something like this. However, I would like to present some data to hopefully help everyone to look at this with a little more clarity. Negative perception: Spam lists are for power gamers, WAAC gamers, TFG’s, etc.
My reaction: Not true.
For one thing, logically, no blanket categorization like this will ever apply to everyone equally. It is impossible to even say it represents a majority of those who use spam lists as without knowing EVERYONE that does so, you can’t make any kind of definitive statement. It is simply and patently false. If you live in an area where lots of people who use spam lists are jerks (or you perceive them to be), that is unfortunate, but it is not indicative of ALL people who use these list building strategies. Thinking that way is destructive.
Equally, not all spammers are nice guys. They are just people who choose to build their armies a certain way. The content of their character is something entirely separate.
Positive Perception: Spam lists are more efficient, and the only way to build a tournament winning list.
My Reaction: Partially not true.
While spam lists are more efficient by their very nature (maximizing most points efficiency) they are not the only way to build tournament winning lists, and in fact, can also provide built in weaknesses.
Spam lists tend to be very one-dimensional, and if you draw the hard counter to your spam list at an event, you have a huge disadvantage. Furthermore, if you analyze tournament winning lists, you very often see top players with lists that do not spam units. Space Curves (Ben Mohlie), J.Wolf, Blackmoor, and Greg Sparks come to mind immediately. All of these players have performed extremely well at the highest levels of competition with armies that contain few to no repeated units.
Negative Perception: Spamming units creates a boring army.
My reaction: Purely subjective.
I can understand this argument from a certain perspective. Variety is one of the coolest parts of this game, and definitely something that keeps us all coming back for more. However, what is or is not boring is a strictly subjective perspective. Chess is not boring to me, and it always has the same pieces (and spams the hell out of those cheesy pawns!)
I find personally, that when playing the game, I become so immersed in what I am doing that I hardly pay attention to whether or not my opponent has spammed out a certain unit type(s). However, that is my opinion. The point here being that this is not a sound point of contention from an objective argument against spamming units. Everyone simply will not see it the same way.
Positive Perception: Spamming units is closer to a “real” army.
My reaction: Not relevant.
40K is not even close to a simulation of actual warfare. Yes, in real life you have redundant units, similar units, etc. However, that argument is not applicable the second we introduce daemons, monsters and super human, super bald, screaming super soldiers into the mix. This game is an abstraction of reality using fantastical units straight from comic books. Any comparison to reality is tenuous at best.
While redundancy is a very real, and very good strategy to use in reality and 40K, you don’t have to achieve it through spamming units. You can take units that are different, but perform a similar battlefield role and achieve an extremely similar end result, while also diversifying your units to prevent weakness to a counter unit that spam strategies open you up to.
So what to make of it all?
Really what this argument boils down to on its most basic level is a perception of what the game is and how it should be played. There are a group of players in this little community of ours who feel that the fluff is paramount and that recreating battle from the Black Library novels, fluff sections of the Codices, and having an experience a little closer to D&D than Go is what matter.
Conversely, there is a group of players that look at the game as a competitive exercise in which the goal is to eke out the absolute most power from a list, and use it as a tool along with your best tactics to overcome all enemies within the confines of the rules of the game.
Both points of view are equally valid.
So what to do about it?
My opinion on the subject is that spamming is a great tool for the beginning player and for the tournament player. For the beginner it means less units to understand rules for, a shallower learning curve to get into the game, and more fun. For the tournament gamer it means a list that is most likely devoid of all fat (which building a lean and mean list is a fun game in and of itself) and, also, a list with less variables to keep in mind and the most pure power you can pack in.
Forgive the beginner for it and help them learn. The tournament gamer should use these lists when practicing for a tournament or when playing in a tournament. Bringing out the elephant gun to play in a casual game usually means no fun for either player, and ultimately, fun is what this all should be about.
The spam free list is for the fluff gamer, and the master. The fluff gamer can build his army spam free to recreate what he feels is an army truly representative of the game’s background and have fun recreating epic battles against similar lists. He shouldn’t, however, bring said army to a competitive event and get upset when he loses to the spam list meant to win games. The master of 40K can and will win with an army comprised of units that would leave many an internet pundit’s jaw hanging in disbelief. With armies that contain nearly no spam, you will see the truly gifted and experienced players win without relying on spam.
How can this be? A spam list is tooled for optimal efficiency! The answer is that the master’s list is built with an even greater degree of efficiency than the spam gamer’s. Each unit in it has a specific task that it is built to perform on the tabletop. The strength of the list then comes not in the tool, but from the player wielding it. While another person looking at the list may not see how it could possible work, the master knows precisely how to use each unit to maximum effect. This toolset then has redundancy and efficiency like a spam list, but also has flexibility and a lack of the weaknesses a spam list does. These lists are often the creations of a singular player who has fine tuned the list over a long period of time and many, many games whereas the spam list is often copied from another source and relies on the brute strength is offers. Of course, there are exceptions to this general rule, but in my experience, it has proven true.
In the end, we will all play as we choose to. But as I stated in the beginning, spam is neither as bad or as good as many would have you believe. It is simply another way to play this game of ours.
Do you agree? Not agree? Let’s hear what you think about spam lists in the comments.

Author: Reece Robbins
Reece Robbins, is one of the most respected names in tabletop gaming. He founded Frontline Gaming and the largest Warhammer 40K tournament in the world, the Las Vegas Open. Reece has been playing competitively and covering Warhammer since the 1980s. He has won major events including Adepticon.
Advertisement
Tactics Warhammer 40k
Advertisement