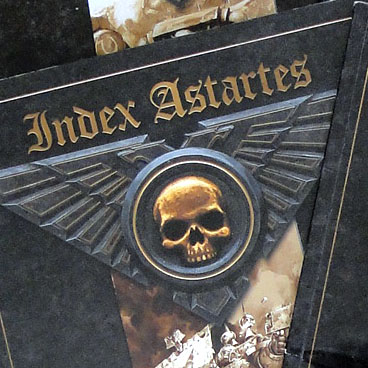 Welcome to 40k Flashback, where I dig deep for something cool that I have from back in the day.  Which according to the comic Dane Cook was a Wednesday.

I could never afford the good jet kits either. Plus those things had a ton of components, we’re spoiled by Games Workshop when it comes to piece count, believe me.

Today I raided my book shelf and found the four tomes of knowledge all penned The Index Astartes. Games Workshop back in the early to mid 2000’s put out articles in the White Dwarf that covered the fluff behind the various named Chapters of the Adeptus Astartes, aka the Space Marines.  Some chapters (like the Iron hands) even got a free set of rules as well.

They were collected and re-printed in the late 2000’s over four codex sized books, that have become increasingly rare to find. Many people I’ve talked to didn’t even know there was a fourth book, and that seems to be the most expensive of the set these days.

The fluff contained in these books is pretty much what we have to go on ‘accurately” for the chapters besides of course what created/ re-mentioned in the last two Space Marine codices, the older rougher second edition books, and of course the Horus Hersey novels.

Now the Index Astartes is not to be confused with the Codex Astartes, which is as explained below is what the chapters base their operations on.

Of the one thousand or more Chapters spread across the Imperium, the vast majority are proponents of the Codex Astartes, the strict code of order and organisation that governs every aspect of a Space Marine Chapter’s organisation. Detailing subjects such as the structure of a Chapter and the most effective method to wage war in any given situation, the Codex Astartes is the greatest treatise of its kind in existence, penned by the mighty Roboute Guilliman – Primarch of the Ultramarines Chapter. It stands as holy canon for the overwhelming majority of the Space Marine Chapters in existence and governs almost every aspect of their structure and operation.

It’s a very neat set of books, and are definitely worth trying to get if you can. I’ve borrowed mine out several times as well because lets face it- we all love fluff!

Have a great weekend guys, and don’t forget to get your hobby on!

So which chapter do you think got the best fluff treatment in the Index Astartes series? -MBG