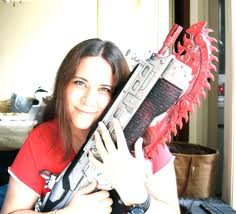 Yeah.  That’s about as many characters as I can fit in the title field – and let’s go ahead and point out it isn’t even the full title.  A word was left out.

Hello again!  Brent here on this Terrible Tuesday, all fresh-faced from Strictly Average and ready to drop another quality article on an unsuspecting public.

It’s up to you to decide what kind of quality that refers to.  While you’re at it, maybe you can figure out the oh-so-subtle theme for the images.  (As in, the images I’ve stolen from around the internet.) If you’re here, reading this, you’re a gamer… specifically a subset of gamer known as a ‘War Gamer.’  Take a breath!  That means you’re upper echelon.  (Right?)  Here are the rest of the Top Five:

Maybe you fit into several categories.  If you’re lucky, you’re a member of a specialty subset, such as the Stealth Geek.  As an SG, you’re also into such things as ‘dating.’

There are other specialties we won’t go in to here, such as Amtgarder. But in my exhaustive research into this subject I’ve discovered an interesting trend:  Video Gamer is perhaps expanding its reach, taking unto itself previously restricted areas of interest.

Such as roleplaying.  Think D&D, then think Skyrim.  You’re smart – chances are you leaped ahead of this article after the second picture.  That being the case, I won’t waste anymore of your time. Skyrim is awesome – as in the dictionary definition of the word.  It is awe inspiring.  Be you any sort of gamer – any at all! – then fear the console controller, for it will control you.

It’s a meme, a virus, a time sink unlike anything that’s come before!  Since picking it up, I’ve set down the book I was reading (House of Leaves) and the miniatures I was painting (Sisters of Battle) to play this game.

It’s entirely too much fun.  Know why?  Because it perfectly hits all the reinforcements we gamers grew up developing.

All those things that made tabletop gaming a bother, like actually getting together and socializing, rolling dice and killing an afternoon, are completely unnecessary.

The point is, Skyrim does it better.  Tabletop roleplaying games are becoming the dinosaur of the genre.

So when does this happen to Wargaming?

Can you even imagine it?  The advances in technology just in my adult lifetime are staggering.  Though I don’t think we can really guess at the technology to come, it isn’t a stretch to think of 3D projectors displaying an image on a table…

…animation, from the units to the battlefield…

Are we destined to become dinosaurs?  What’s the future look like?  Is it one you will join or avoid as long as possible?