For the Last 25 Years, There has Been Only War! 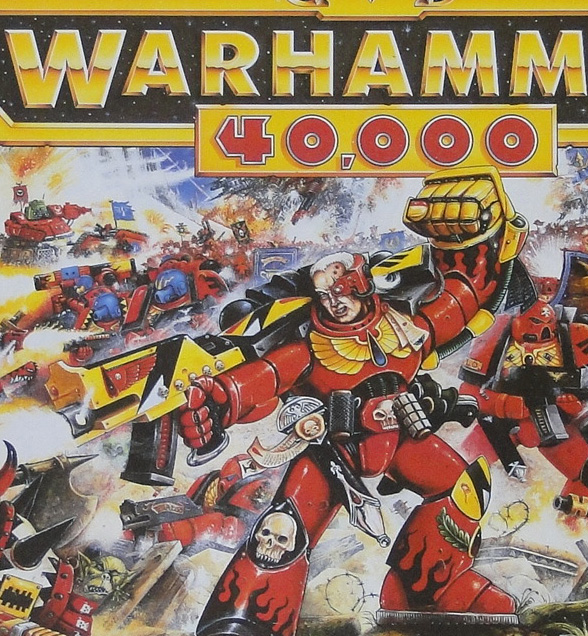 MBG here, with another Flashback Fridays, Saturdays where I dig deep for something cool that I have from back in the day.

So this is it true believers, the 25th Anniversary of Warhammer 40k!

Not too shabby for a game invented solely to sell more sci-fi miniatures. Say what you will about Games Workshop, when it comes down to it they have had the acumen to successfully evolve their business constantly over the last 30+ years into the gaming juggernaut of today.

But I digress, this is post is about my personal perspective on 40k’s birthday.

While I could afford some of the miniatures from back in the day (here we go again), I was never able to afford the old Rogue Trader Rulebook itself.

I had asked for it for Christmas one year, but my mom didn’t get it because she was afraid it was like Dungeons and Dragons (chuckle)…  In the 80’s DnD had a bad rap cause people tended to act irresponsible, and attack each other in real life and such. I think a school where I was living at the time almost got shot up over it as well.  So no 40k book for me, sad pandas.

I did get tons of miniatures though. There was the old “Penguin Pattern” Terminators (before Pre-Hersey post) I still have to this day, a few of the old Land Raider MKI two packs, and various tanks and such.  I remember, comically, that I could never get the metal Land Speeder assembled correctly, and eventually detonated it in my back yard.

When I got a wee bit older I could finally afford better minis. Coincidentally in the mid nineties, the first 40k Starter box was released.  Second Edition 40k it was called, and the rules allowed you to play larger scale battles that were not RPG tabletop based.  Oh snap!

Immediately I was hooked, and played for several years.  The rules, for what they were at the time, were awesome, but games were long and arduous at times. Overall they probably didn’t lend themselves well to tournament play because of this, though. I don’t remember playing in any tournaments until Third Edition came out, but that’s not to say there wasn’t any.

Overall I enjoyed playing Second Ed. more than all of the following editions, but (at least as I remember) there was more of a rock, paper, scissors feel to the games that could be played.

Today I have for you, a look at my old Second Edition Starter Box.  I never really had to use it much, as all my buds had one, and we played either at a game shop, or my friends house. So mine sat around collecting dust for about the last 20 years.

I did use the Marines out of it though, but not the Orks (cause I thought they looked stupid at the time). Kids, what do they know….

The cool thing about this set is that the Games Day miniature this year is the sergeant from the box art! I can’t wait to get mine!

Let’s dive in shall we? Here are the insides minus the Space Marines that came with it. The Rulebook, Wargear book and Codex Imperialis, which I forget what that even was… Close-up of all the fun and exciting grenades! Well if the video on BoLS is any indication, maybe 6th edition should include this.  No kids you can’t turn your rectangular tanks to get free inches of movement… Datacards for all the vehicles released at that time, and the dreaded Vortex grenade template, scourge of games, death to all who crossed it. Scenarios, and rules for armies (before the second edition codices were released). Interesting that Bill King did game development back then…. How to score games… Ah yes the root of many common 40k wargear items. Check out the extreme close ups, its worth the read! And last but not least, the card Ork Deff Dread that supplemented the starter models. Memories…. Good times, Happy Birthday 40k, here’s to 25 more!  Have a great weekend everyone, don’t forget to get your game on.

What are your favorite memories from Second Edition 40k? -MBG