FoW: Bring the Rain…Or Not 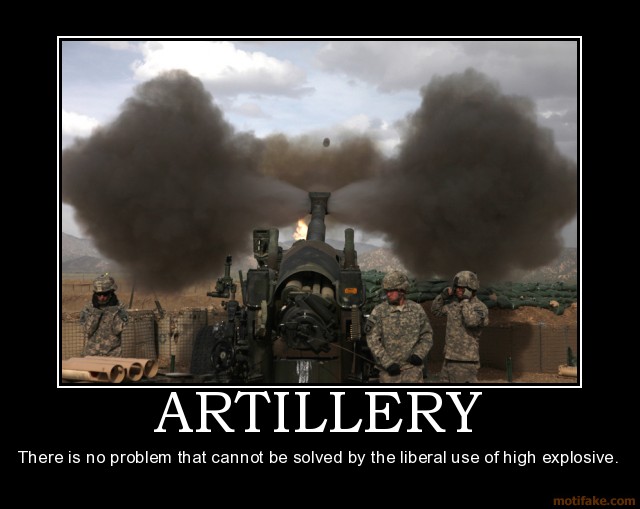 Artillery…never in FoW has there been a more intense debate on how effective or useless a unit can be on the table. Love it or Hate, artillery units can be major game changers. This article will look at the good, the bad, and the ugly of artillery in FoW.

In most FoW games, tanks and infantry tend to dominate the battlefield and rightfully so. For FoW, each army must take a minimum HQ and 2 combat units as the core of their force (similar to 40ks 1 HQ and 2 Troop minimum). Generally, this core is either composed of tanks or infantry, depending on the army selected. Once this mandatory requirement has been filled, players then have a veritable smorgasbord of choices from which they can bulk out their army. For most armies, one or more of these support options can a form of artillery. A FoW artillery unit varies in size and gun types available depending on each faction, but generally they are composed of 4 to 8 guns with observers, staff teams, and other unit elements. An artillery battery represents a significant point investment, and therefore many players think long and hard before deciding to include an artillery unit in their force. There are many factors, some good and some bad, which can influence someone taking artillery support.

The Good
Artillery batteries are one of the few units in the game that can truly reach out across the table and hurt an opponent. The average artillery battery has a bombardment rage of 72″ (with some having more or less range depending on gun type). This allows artillery to fire over terrain, such as trees, hills, buildings, etc. Combine this with a well placed observer and a hidden artillery battery can hit a large swath of the battlefield without being in harm’s way, a major advantage in FoW. Another unique ability of artillery is that it can fire indirect bombardments and direct line-of-sight shots (mortars can only fire indirectly). Because of this, artillery can form a last line of defense or hold your deployment zone, allowing the rest of your force to attack or react to your opponent without jeopardizing you objectives. Finally, certain nation special rules make artillery very attractive. For American and British armies, their artillery possesses special rules that make their artillery unit far more effective than that of other armies. Coupled with a relatively cheaper point cost when compared to their German or Russian counterparts, and the result is that American and British artillery is more than worth the points investment.

The Bad
While artillery has its advantages, it also has its flaws. For artillery to fire an indirect bombardment, the desired target must be visible by either a part of the firing unit (leaving your artillery open to return fire) or by a designated observer. While artillery observers can be placed separately from their parent unit (opening more lines of sight), depending on the table setup, there may be no visible targets due to intervening terrain. A clever opponent will hide his units behind terrain and in cover to limit the potential danger of your artillery, curtailing their effectiveness on the table. Another negative factor is the lack of artillery special rules for non-American and British armies. While German and Russian artillery can be just as good as that of the Americans or British, their lack of special rules hinders their overall effectiveness on the table top. Coupled with a higher point cost and most German and Russian players will forgo artillery all together in exchange for something more likely to have a guaranteed impact on the game.

The Ugly
But for all its advantages and disadvantages, the single most important factor when considering artillery in FoW is that unless it is firing directly at a target, it must successfully range in on a target to fire a bombardment. This can be very difficult depending on the opponent’s army. In FoW, the ability to hit a target is not dependent on your own ability like 40k, but on the skill level of your opponent’s army. Because of this, a Veteran rated force will be harder to hit than a Conscript rated force. Add in factors like concealing terrain and foxholes and some armies can be near impossible to hit with artillery. While some special rules and the three attempts to range sometimes helps to mitigate this, there are times when artillery may not hit anything.

Conclusion
In the end, no one can really tell you how effective artillery can be in FoW. It can be both a blessing or a curse, all depending on the roll of the dice. I played in a three game tournament once that summed up the effectiveness of artillery. In the first game my artillery couldn’t miss, wiping out large parts of my opponent’s army. The second game was so-so, with the artillery doing some damage, but not as much as hoped. In the final game, my artillery failed miserably, failing to range in or cause any damage at all. Ultimately, taking artillery in FoW is a personal choice. While it can do great things or fail horribly, it forms an integral part of the game and certainly makes the game more interesting and entertaining.

What are your opinions on artillery in FoW? Do you never leave home without it or does it do nothing but gather dust on the shelf?