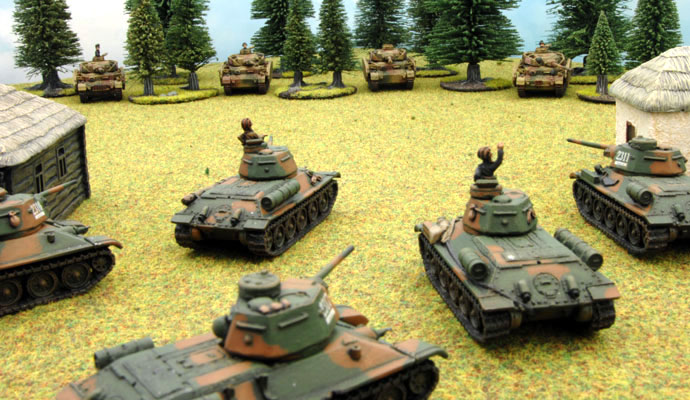 Wraith here with another FoW topic for your viewing and discussion pleasure.  This week, we’ll look at the changes to the Soviet Hens and Chicks special rule brought on by the release of Red Bear and its impact on the game.

In the original version of Hens and Chicks, if any Soviet tank or transport team in a tank company moved more than 6″ in the Movement Step, none of the tank or transport teams in the company could shoot in the Shooting Step.  This meant that if one tank moved 6.01″ and the rest remained stationary, then the whole unit could not shoot at all.  As a result, Soviet tank players had two basic choices: move closer to the enemy or stay back and engage at long range.  The old version of the rule forced Soviet tank players to prioritize between moving a little (or not at all), but still being able to shoot, or move their full distance (or At the Double) and not be able to shoot.  To offset this inherent penalty, Soviet tanks were relatively cheaper than those of other armies, meaning that you got a lot of tanks that could either move or shoot, but not both.  This led to Soviet players to either rush enemy lines, sending their hordes of tanks forward, hoping some would survive the enemy’s shooting to be able to return fire or sit back and engage in a long range gunnery duel, using their large number of shots to inflict casualties before advancing.

While both tactics were viable, they generally suffered from the fact that nearly every Soviet tank unit has a Trained skill rating.  This makes them easier to hit, even at range, making a long range duel a losing proposition most of the time.  At the same time, if they tried to valiantly charge forward, they were generally butchered just as valiantly.

Enter the new Red Bear book and with it, a new version of the Hens and Chicks special rule.  This new version of the rule still captures the ‘if one moves, all move’ aspect of the old rule but offers more tactical flexibility.  With the new rule, if the Platoon Command team moves during the Movement Step, than all tank  and transport teams in the unit must move as well.  But if the Platoon Command team does not move, then only the teams that were Out of Command have to move.  Any vehicle that moved adds a +1 to the score needed to hit, but can still shoot.

While still suffering a penalty to shooting, the new rule offers a great deal more choices and on-table flexibility for a Soviet player.  Under the revised rule, Soviet tank units can advance across the board and still shoot, potentially causing casualties while still closing the range to their opponents.  This has made Soviet tanks much more effective, because they are no longer forced to choose between moving or shooting.  Instead, they can be used like the tank forces of any other army, bringing Soviet tanks back into the tier of forces to be reckoned with.  Commensurate with this new ability, Soviet tanks are now slightly more expensive point wise, meaning you will see less on the table, but those that are there will be that much more effective and easier to use.

This change to the Hens and Chicks special rule has caused a paradigm shift when facing Soviet tank units.  Players who are used to dealing with a two-dimensional force have had to adapt to the new way Soviet tanks operate on the table.  Overall, the reaction in my local group to the change has been positive, with both Soviet player and non-Soviet players seeing the new rule as a positive step in making Soviet forces more effective on the table top while still catching their historical feel.

What has the reaction to the revised Hens and Chicks rule been in your area?  Has it been a step in the right direction or did it miss the mark?