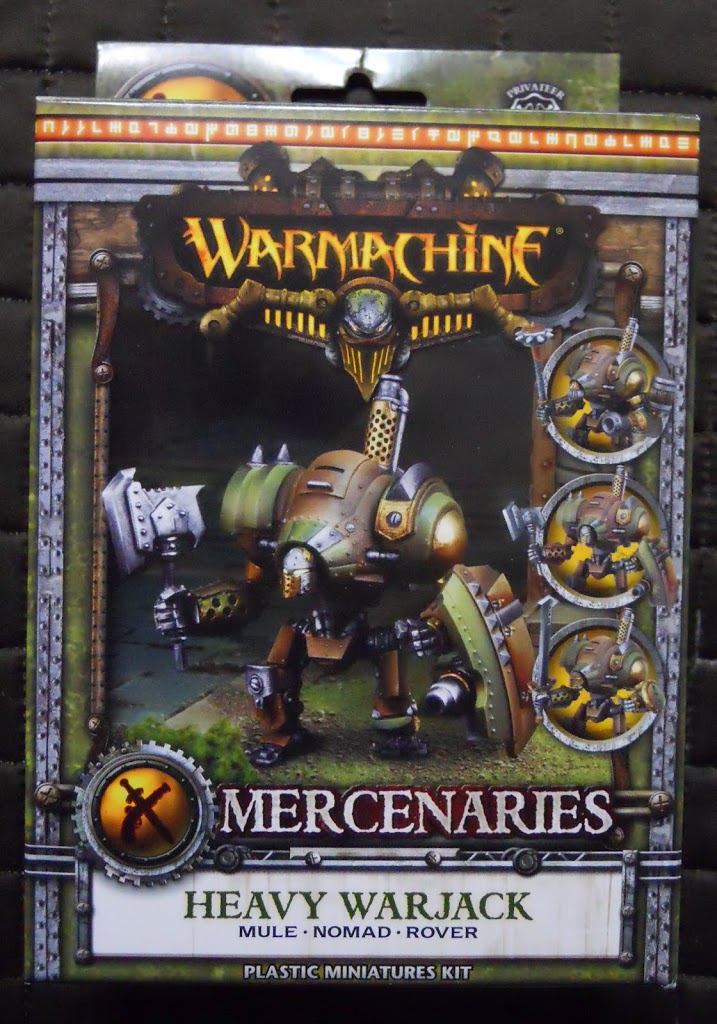 The new Mercenary Warjack plastic kit was released this January and has already hit store shelves. But, since we did an unboxing of the other plastic ‘jack kits it only seemed fair to cover this one as well. Just like before, we’ve got a bag of jack bits nestled in a press-molded tray with the cards. This time there isn’t one of those long compartmentalized baggies like we saw in previous kits. We just get one big bag, with a smaller bag inside for the small pieces like the heads and a fist. Here are all the pieces from the kit. I took a close-up shot of the Rover pieces since that’s the new ‘jack. Here’s the new torso: an interesting fusion of the old Mule and Nomad chassis. I remember when the original plastic ‘jack kits were released a debate emerged as to whether or not mercs would ever get one. There were those that insisted the Mule and Nomad looked too different for there to ever be a kit that could be made into both of them. I found myself wondering whether they would just choose one of the existing torsos to go with, or find a way to combine the two two. Looks like I’ve finally got an answer. I like the asymmetry. It seems to fit the theme of mercs as it makes the model look more ramshackle. I absolutely love this boiler. And the leg has cool internal pistons. And this kit finally has something I’ve heard a lot of requests for: more extra bits! While these crates and barrels might me part of the Mule kit, they’re also great accessories. I suspect a lot of these extras will find their way onto bases. Maybe someone will come up with an even more creative use for them. And of course my first Merc plastic kit had to be Rocinante. It was the last thing missing from the Damiano list I’d been rattling around in my head. I’m going to start painting it as soon as I’ve finished with the Nicia I’ve got for my Protectorate army.

~So are the rest of you merc players as happy as I am to finally get your hands on this kit?