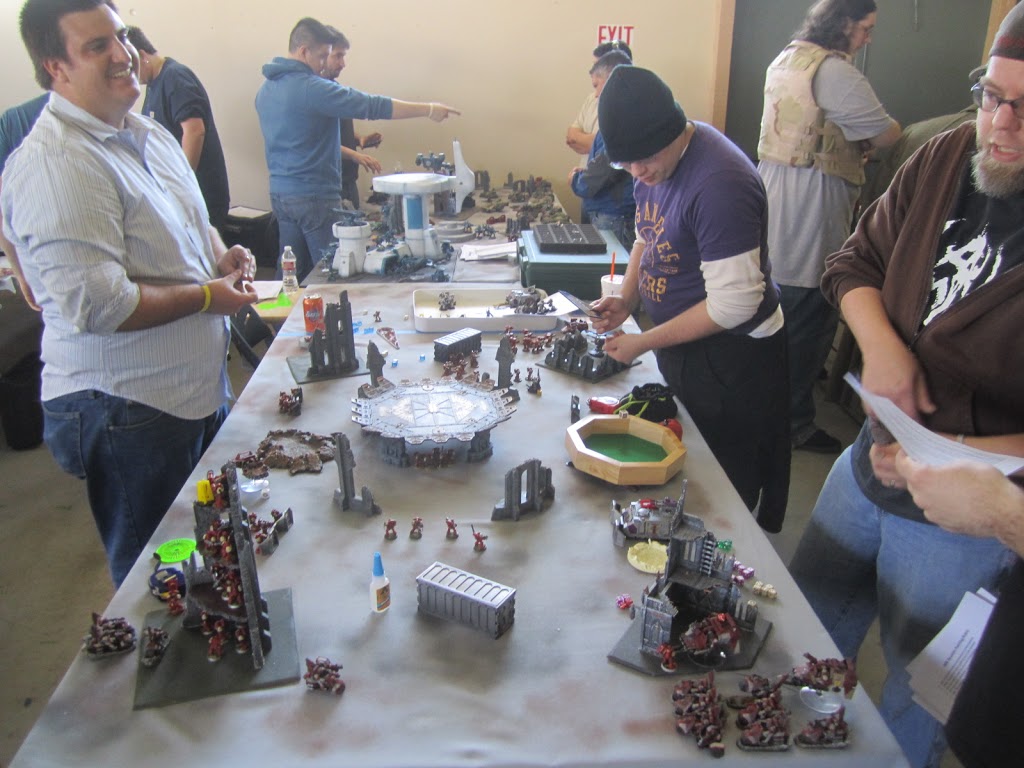 The Bay Area Open 2012 is behind us and what a weekend it was! Let’s see what is tells us about the 40k meta.

Reecius here from Frontline Gaming and just finally starting to feel somewhat rested after a crazy weekend of fun, games and friends. And beer. Lots of beer.
The Bay Area Open was a complete blast this year and everyone there told us they had a great time and couldn’t wait to come back the following year. We only had 3 no-shows for Sunday (third day of the event) between ALL of our game systems combined!
As TO’s, that makes us really happy as it takes an incredible amount of work to get an event like this up and running. So a heartfelt thanks to everyone who came from all of us at Frontline. We don’t make any money on these events and to hear you all had a great time makes the literally hundreds of hours of work we put into it, worth while. As my articles focus on competitive 40K primarily, that is what we will analyze. I will throw out a few quick things about Fantasy though, we had a Wood Elf player take second place in a VERY competitive field of Fantasy players! And of course, congratz to Josh Rosenstein who was our tournament champion (Skaven) and to Mike Scaletti who won best painted with his gorgeous Warriors of Chaos army.
40k Results
On the 40K side, we had some very interesting results. For our Team Tournament which used the Adepticon Team Tournament missions as a guide (thanks for your help, Mathias!), we saw “Team TNT” (Yakface and Janthkin) win it all with Tau and Tyranids….what the internet will tell you are the two worst books in the game. They went undefeated with near max battle points.
In second place, was “A Mexican and his Amigo” (Israel and Raw Dogger) with Tau and Blood Angels, undefeated with max battle points. Third place saw Black Templars and Orks rounding out a VERY competitive field of top notch players with a 2-1 record.
Now granted, the missions were non-standard, but they were posted up far ahead of time and the players in attendance were all seasoned vets. I found it very interesting to see so many “sub-par” armies performing so well. As we have said over and over here at Frontline Gaming, the player is what matters, not the army. List building is a skill, no doubt about it, but think twice before you start drinking the internet Kool-Aid telling you that certain books can’t win. On the 40K singles side of things, we had an extraordinarily tough field. Out of 108 40K Singles tickets sold, and 92 attendees, we had 15 of the top 50 players in the country (according to RankingsHQ). That means 1/6 of our players were top notch, multiple tournament winning players. And that’s just the ranked players, there were a slew of other exemplary generals in attendance to make it a great test of skill for all of our attendees. The event was 1750pts, what we have found to result in over 90% of games finishing in our 2 hour 15 minute time limit. From a logistical stand-point, we have found it to be the best compromise between time and a points limit that allows players to bring all their toys.
We sought to standardize the missions to level the playing field, while remaining as true as possible to “normal” 40K. We used all three book missions simultaneously in every round of play, varying only deployment. We did this to avoid near auto-lose situations wherein a Draigowing army with 5 KP’s plays a Tau army with 20+ KP’s. That just isn’t fun. (And for the record, not a single person said it got boring to play the same mission, in fact, they all said they liked it as it allowed them focus on trying to win, and not trying to get their head around the mission).
We are proud to say that our tournament champion, going 6-0-1, was Team Zero Comp teammate, ChristianA with his Hydra Spam IG! Congratz to the young gun, who beat out the field to barely win the event. ChristianA’s been on a hot streak lately with his Hydra Spam IG, and his now legendary good luck, brutal list, and air-tight game play has earned him another big win. If you go to the ETC buddy, do us proud!
ChristianA played through some expert player’s to earn his spot. He barley beat Blackmoor’s Draigowing in a turn 7 steal (he would have lost turn 5 or 6), Josh Dearth’s Nids (stole the initiative, and still only won by a single KP!), went through Dogstar34’s beautiful Lamentors (wow did Dogstar34 have some bad dice in this game) and then barely tied Goatboy in the finals, which was all he needed to secure the top spot by a hair’s width margin (Goatboy finished 5-0-2)!
Of our top spots, the final 5 looked like one would largely expect: 2 IG, 2 Grey Knights, and 1 Wolf player. The big 3, all represented.
However, if we zoom out to our top 10, the waters get muddied a tad. We have 2 Orks, 2 more Grey Knights, and 1 Nid player! All of these players won 5 out of 7 games, which is excellent considering the strength of the field. Ah, how I love that old wive’s tale that Orks are “bad.” Such hogwash. One sample set doesn’t prove anything conclusively, of course, but this data is just one small example of what we have observed over and over again: good players win with any army. The fact that Orks did so well despite the plethora of Grey Knight players (their worst match-up, IMO) just further reinforces the fact that they are easily a top contender in the right hands, and tournament data backs this up.
List vs Player
And then we have CSM, and Nids in there, playing with the big boys! Again, skill trumps list.
Even further, the lists that performed well, were not what one would expect in many cases. Both Nid lists were really interesting, with a huge variety of unit types and nearly no spam. Goatboy’s Wolves had NO Longs Fangs and he used Lone Wolves. One of the CSM lists was all Tzeentch!
Again, it just goes to show what experienced players already know: a list carefully constructed and fine-tuned to fit a skilled player’s style, local or expected meta and experience will go further in a truly competitive setting than your typical “net-list” that so many internet pundits would have you believe are the alpha and omega of competitive 40K. Interesting to note also, that many of these “experts” that shout about this or that super list don’t seem to win any events themselves, while good players with a variety of “bad” lists consistently win at the highest levels of play. Hmm.
Congratz also to Blasto who, once again, walked away with a top painting award with his gorgeous Orks. Also, congrats to Justin Keefer and Ben Vaughn, who rounded out the paint awards in a closely contested show-down of brush skills.
Lastly, a big shout out to all the winners of the “Best-Of” awards! We gave a battleforce of the winner’s choice to every player that did the best with their army. We found that this made the tournament a lot more fun for everyone instead of just focusing on the big winner. Each player, even if they lost a game, could win bragging right and a cool prize for doing the best with their army. We found it also encouraged people to bring a wide variety of armies (we had every army represented!). So congratz to all of the top generals of their respective armies!
The 40K narrative event was also a big hit, and we heard nothing but laughter and houts coming from their end of the hall, so thanks to Big Jim of Deepstrike Radio for putting together such a great event.
Thanks again to everyone who came and for all the kind words! We are already planning next year’s event and plan on making it even bigger, better and more fun!

Pretty Pictures!
Here are some more shots of some of the many beautiful armies: Have at it folks. What do you think of those winning armies?