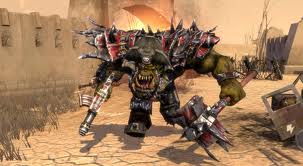 In part two of this article [part one], we go over a specific example of overcoming a bad mission/list match-up.

Reecius here from Frontline Gaming here again to share a war story with you all. I was playing my trusty Bjorn Wolf, Space Wolf list (MSU style build with maximum long range firepower led by Bjorn) that has served me so well in the tournament scene these past years against Fuegan17’s brutal horde Orks. I know some of the Internet Pundits claim Orks aren’t good, but that is just patently wrong and tournament data proves this. So, that aside, the match-up was very bad for me as horde Orks can simply walk into my heavy firepower and then defeat me in combat.

My strategy against them has always been to deploy against the back board edge to maximize the distance between us, and thus my turns of shooting. I first neutralize their shooting elements (Lootas/Big Guns) to protect my fragile shooters (Long Fangs, Typhoons, Razorbacks). As the Horde approaches, I carpet bomb them with frag missiles and use a combination of Jaws of the World Wolf to attempt to snipe Power Klaw Nobs and Dreadnoughts to tar pit oncoming mobs of Boyz. I then redeploy the rest of my forces away, running for the hills and shooting as I go, sacrificing units where necessary to slow the boyz down until none are left.

This strategy has proven very effective for me. In true Ard Boyz fashion though, the mission was not very good. It was Take and Hold: the player with the most scoring units in the middle of the board wins. So I had to move my little 5 man, MSU units TOWARDS the Orks. *%&^$#!!
Obviously, this was a terrible, terrible mission/list match-up. On paper, I should have lost…badly. The first and most important step when facing these very bad match-ups is to not let yourself become mentally defeated before a shot has been fired. So often I see players give up before the game has begun when they think they are in a bad situation. Coincidentally, this is also when you most often hear cries of cheese. When a player feels that they are in a helpless situation, they often blame the game or the other player.
So, after ensuring that you are mentally prepared to give it your best shot, stay calm and look for a way to win. You are now already in a better position to play the game. The next step is to rationally assess the situation and to find a way to win, even if it is only a slim chance, or decide to play for the tie.
In the above situation, I decided that I was going to play for the win (as I almost always do, I like the drama of going for the glory, even if it means I may crash and burn!). I determined that the only way I could possibly win was if I were to even the odds by taking out his shooting elements quickly (3 squads of Lootas, 3 squads of Kannons), take out some of his Mobs of Boyz to give me some small hope of taking them on in combat (which was inevitable given the mission), and somehow protect myself from Snikrot and a Warboss coming in from behind my lines. No easy task, to be sure.
It is important to see this plan in your mind before the game begins. 40K is incredibly fluid, so any plan must remain flexible, but having a plan is critical in these match-ups. I got first turn thanks to Bjorn, and was able to deal a very heavy blow to his shooting units first turn, ensuring that he would have very limited ability to reduce my damage output. Target prioritization is hugely important. Experience will be your best guide here, and identifying which units must be eliminated first, and then focusing on them until they are gone is critical to making a winning strategy.
Once the shooting elements were largely neutralized, I began the slow process of carpet bombing key Ork mobz down to manageable size. When faced with multiple similar or identical targets, always pick that unit which poses the greater threat or is easier to kill, even if it is only marginally more threatening or easier to kill. In this case, I chose those mobs closest to me and focused on reducing the Greenskin numbers.
I was also slowly advancing towards the Ork horde, trying to put distance between myself and my rear board edge to keep Snikrot and his Warboss buddy off of me. If they came on early and pulled off a complex multi-charge, I was done for.
Luckily, this did not happen. This allowed my plan to develop and in turn 3, I went for a game winning/losing play that would determine the course of the game. Often, in these types of poor match-ups, you must take these big chances and trust to luck to win. If you play a straight-up game, you will probably lose. In this instance, I went on an assassination run with a Rune Priest to try and take out Ghaz and several of his Nobs with a single Jaws. Ghaz lived, unfortunately, but I did kill several PK Nobz from out of large Mobz, which took the teeth out of them. I then Charged Ghaz with Bjorn in that same turn as facing Ghaz alone is a lot less daunting than Facing Ghaz AND a PK Nob. I put all my attacks on Ghaz which forced my opponent to call his WAAGH! In his turn. Now, if only Snikrot didn’t come in from reserves, I was far enough away from the board edge that he would not be able to charge me the turn he came in.
And they didn’t! Luck was with me.
From here, I was able to use my other Dreads to tarpit flanking Mobz of boys keeping them off of the objective, and was able to assault the last Boyz in the middle with all of my remaining troops (and I mean ALL of them, Grey Hunters, Long Fangs, you name it) to just barely earn me the win in an incredibly close game.
The lesson to take from this is not that I am Mr. Super player, but that staying calm in the face of daunting odds, formulating a plan, sticking to it, and bold action coupled with a little luck can earn a win despite terrible odds. Will you win every time? No, of course not, but you can significantly increase your odds of success.
Have at it folks. What do you think?