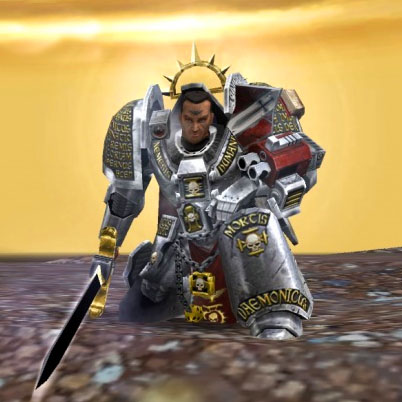 So, I’ve been playing at Adepticon for the last 2 days.  I’ve been on a team with a Grey Knight list and I want to share with you why I despise this army.

First some disclaimers, I’m not a top tier player by any means, but I have been playing this game for a long time (since Rogue Trader).  I was using a fairly bog-standard Grey Knights build with a handful of Strike squads, a libby, some dreads, and a couple of bells and whistles.  Nothing too crazy or out there by the codex standards.

It took me exactly ONE GAME of messing around to figure out what this army was about.  It took exactly ONE GAME to get the feel for the maneuver and fire,  then mid-to late game assault and mop-up operations, and to learn the sequencing of various psychic and wargear combos.

And once I figured it out, I was able to hold my own versus players with very good armies from decent codices, who had been playing for months – and that is a major problem.

It felt like I was playing Tau, or Eldar, without the liabilities.  I could maneuver freely, project potent firepower, hold my own in assault once pretty much anything out there had been weakened a little, and best of all, practically everything was scoring, or could be made scoring.

In short, it felt like I was playing an army with training wheels.  And that is why I think Grey Knights are a SERIOUS problem with the game.  This game should not have Easy Buttons.  When I play other armies I feel challenged, and feel as if I have to adapt and overcome each codex’s weaknesses and emphasize its strengths, while doing the inverse with my opponent.  I learn something and feel stronger with each game, win or loss. When you take on an army like Dark Eldar, Orks, or even the brand new Necrons you have some tough tactical choices to make from building your list all the way down to turn by turn tabletop choices.  With Grey Knights, you just hope to roll well.

With Grey Knights, I felt that I was learning nothing – like the army was almost playing me, and by the end of the day, I felt like playing this army for long was actually eroding my skills as a player.

I don’t know what 6th Edition will hold, but if Grey Knights don’t get rebalanced, I fear for the future of about half the armies out there.  I want Warhammer 40,000 to be a deep multifaceted universe out there full of adventure and challenge.  If the Dark Millenium becomes one large room of  Grey Knights duking it out with the Imperial Guard and Space Wolves, there are other game options out there.