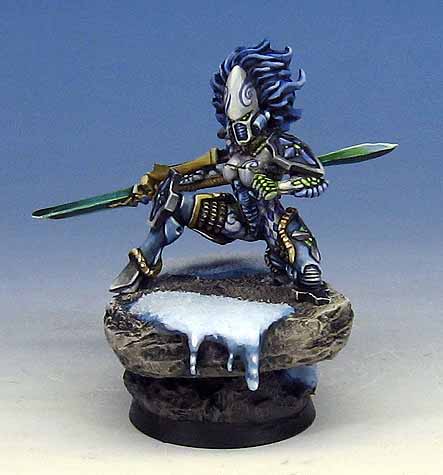 Adepticon 2012 has come and gone.  It was a great time, but – as it turns out – the next day dawned all the same.  The world continued to spin on its axis, a top that just wouldn’t.  Quite.  Tip.  Yes, life everywhere proceeded on, all-normal like…

…except I’d play a two-hour game that forever changed my outlook on tournament play.

That bears explanation but first, a greeting!  Don’t worry, I’ll do it quick:

(Oh, yeah.  Buy stuff from Spikey Bits.  Did you know he offers a big discount?  You heard it here first, right?)

Now that’s out of the way, let me get straight to the point.  I played an artist by the name of James Wappel in Round Four of the Warhammer 40K tournament, and his Grey Knight army was a thing of beauty.  By far the nicest army I’ve had the privilege of sharing a table with.  Granted, it was the end of a long day, but sitting across the table and just… gawking… at this dude’s miniatures was simply profound. If this is beginning to sound like a love letter, have no fear.  I only love my long-suffering wife and I only stalk Jawaballs.  Those are the rules.  We have to follow the rules.

Thing is, sitting there, I relaxed and started pushing models around the board.  The moves weren’t terrible, but there was no investment in the results… …because it was already there.  I was playing a great game on fantastic terrain with two well-painted armies.  Well, one well-painted and one-propainted, but you get the idea!

It was fun for the sake of fun, but frankly it wouldn’t have been the same experience if we both hadn’t invested the time in painting. …and Lord knows ‘competitive’ in all its myriad form has been talked to death these past few years.  I want competition – really, I remain a competitive player at heart – but the day the TO’s stop enforcing the rules for painted armies at the big Indies is the day I won’t bother attending.

(As a side note, is anyone else ready to cast aside 5th and embrace the new edition?  Here’s hoping the rumors about another army creation rubric are all true; the Force Organization chart has outlived its usefulness.  It’s time for a fresh start it is!)

So is this about Comp?  The painting requirement; is that an arbitrary condition purists should deride as sullied?  I don’t know – you tell me.  What I do know is this:

At first glance, these items seem a bit disconnected, but consider for a moment and you may just come to the conclusion I did:

Tournament players attend for the spectacle. What..?  You want elaboration?  Okay, meaning I’ll shell out cash for a weekend trip and a marathon of gaming because it’s something I can’t get at home.  It’s like a carnival.

The Indy Tournament Scene, by which I mean the larger, annual events, are a showcase of the hobby you simply can’t get at home.  I throw down every week at my local store, rolling dice against my good friends and having a blast, but it’s still in me… …that itch to hitch a ride to the Las Vegas of Wargaming!  Be it Adepticon, Wargames Con, Da Boys, Feast of Blades, the Nova Open, or countless others springing up around this country and, I think, the world, it’s all about the glitz!

It’s all about the glamour.  The spectacle.  It’s… …inspiring.  It makes me believe I can do it.

But I’m inspired to try.

That’s Adepticon, ladies and gents, in a nutshell.  Next up, Wargames Con!

That’s it folks, a Terrible Tuesday, come and gone.  Here’s hoping you enjoyed the article.  And if you’re frantically looking for ‘*’ <——- this symbol, take heart.  You’re not going to get a social disease by failing to visit my blog.

But check out James Wappel’s nonetheless!  Here’s the LINK.

(Here’s some after-article extra pics, just ’cause.  Make sure to check out James’ blog to scope out the pictures of his Adepticon Grey Knights army!) (Lastly, here’s proof even a talented painter can’t spin gold from dross…  Sorry McVey!  You’re talented, but not everything we touch is magic!)