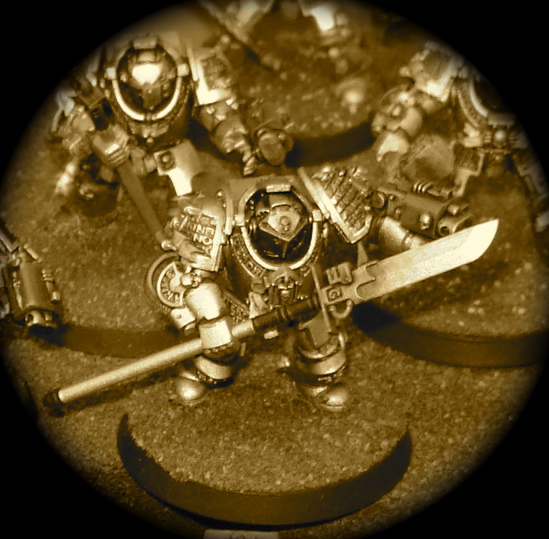 Despite the resources out there, some hobbyists just can’t – or won’t – paint their armies.  Luckily, someone out there will!  But how do you break in…

Greetings on this fine Terrible Tuesday!  My name is Brent, and I’m the lone voice behind Strictly Average.  Guess all the hugs and gropings scared any prospective partners away, but having cried myself out on that score ages ago let’s just move on.

It’s fair to say the art and science of painting miniatures has taken off these past decades – and frankly, I’m pretty jealous.  I could have saved endless hours slapping paint on small models in poor light if only my birth occurred in the Age of the Wash.

You younger hobbyists don’t realize how lucky you have it.  Seriously.  We all had to invent this crap on the fly; even then, we’d have to wait unit bulletin board systems accessed via 2400 baud modems (screaming fast!) gave way to broadband and the World Wide Web made sharing secrets beyond a local level actually practical.

Does this sound like a, “I walked to school and back both ways in the snow,” story?  Yeah, maybe.  Whippersnappers, the lot of you!

Even way back when there were those of us to whom painting appeared effortless.  It took agonizing hours and many sittings to finish painting my first Ork, something the local prodigy did easily in a few evenings.  For a squad. Those long, frustrating days learning to paint are probably why most of my efforts these last ten years have been toward speed painting techniques, like batching painting, washes, and the like.  While I’m not the prodigy and never will be, these days my output is smoking fast while still maintaining a decent standard.  My best efforts in this regard – to date – are the Slaanesh Eldar I worked up for the Wargames Con two years back.

That said, I’ve never considered commission painting.  It isn’t a natural fit, really, largely because there is more than enough of my own junk to work on without taking on someone else’s.  Also, among the painters I most admire, a handful are very successful in that line of work.  Since I’m a fan of the shameless plug, here are the folks in question: 1)  GMM Studios is my personal favorite, and with Adepticon coming up I’m getting all giddy at the opportunity to see his latest effort!  His blog is worth checking out; take your time when you get there.

2)  Next Level Painting is next on the list, and this dude is a true talent.  His style is similar to GMM, with an emphasis on slick air brush work, but his take on armies is all his own.

3)  Lastly, I’d be remiss if I didn’t mention my pal, and co-inventor of the Sadness Doughnut, Goatboy himself!  His personal company, Full of Monkey, does graphic design and commission work.  He’s unique, as is his work. Those dudes, among others, are professionals; don’t try this at home.  My output may be good, but I simply can’t match the quality and speed they achieve day in and day out.  Which is why they can go into business and make a living and I can’t

That said, I did it anyway!

On a much smaller level, of course; just a few small projects then one big one.  During this process, I’ve managed to stumble into a number of mistakes – some obvious, some not so much – which seem now, in hindsight, fairly obvious.

I’m sharing that experience today, primarily because it’s interesting and hobby related, but also because I can imagine a number of you out there have either tried their hand at the odd project or two for someone else, or will in the future.

Learn from my mistakes!

Here’s how it happened.

I made a deal with CPiQ (the name has been changed to protect the guilty!) to paint his Grey Knights and put some painting toward his Nids in exchange for a boatload of Daemons with which to update my army.  Considering I’m not even contemplating updating my Daemons for a few years is a pretty good indication that I tend to take the long view. It’s hard to pass up a deal.
Anyway, CPiQ is the local wheeler-dealer-trader type, so complex multi-person trades are his bread and butter.  And toast and jam.  You get the idea.  Point is, he traded his Grey Knights with a guy named Tim, exchanging like for like and getting value out of value I hadn’t even finished putting on.
Then..!  Tim talked to me about adding more detail to each Grey Knight.  I wanted to anyway, since it’s hard for me to leave well enough alone.  So some cash came my way.  All well and good.
Doesn’t matter.  By any standard, I’ve lost out on this one.
Why?  See if you can keep up!
CPiQ provided miniatures that needed extra work that wasn’t provided for in the arrangement; mostly arm swaps, but some of the models were in bad shape and required TLC.  I don’t know who glued these models together, but eventually I gave up and reset practically every piece.  They were so brittle they’d fall apart at the slightest handling.  One was so bad I gave it back.
The arrangement CPiQ made with Tim involved 1) additional arm swaps to accommodate the latter’s needs, 2) added miniatures, and 3) additional work per model.
Now, #3 was accounted for between me and Tim, but he got the friend price, largely because I know he operates in a pretty strict budget and I was already into this deal.  Plus, if I’m being honest, I wanted to do the extra detailing and deliver the best possible product.
All that said, the extra work of construction I’d already done plus the additional work added by the new deal plus the additional detail on the models that were already done plus the additional work on more models added to the deal… …equates to a significant investment in unaccounted for time!
Mine.
More than is probably apparent even after the explanation.  You see, part of getting value out of working on someone else’s stuff is correcting identifying time against value.  That is, how fast can I complete this work to the expected standard so it’s a win / win?
That means technique and batch painting is critical.  Having gone over models two or even three times is time wasted – meaning I should have done it right the first time!  It’s like throwing money at a problem.  Sure, it works, but it’s wasteful.
* * *
Don’t get me wrong, I’m neither upset nor all that worried about it.  A deal’s a deal, so my part is to complete the project… and face it,  the experience is invaluable!  Nobody set me up for failure; I was just ignorant.
This project has taught me more about the pitfalls of commission painting than any normal arrangement would have.  I’m now much more aware of the hidden costs involved, which will no doubt help me avoid them in the future.
So how should I have done it, based on what I’ve learned? 1)  When I learned the models required significant repair work, I should have talked to the client before effecting them.  It was his choice to either A) adjust the price to include the work or B) take back the product and made the fixes himself.  Sure, it was just as easy for me to do the work myself, but that’s wrong-headed thinking.  It’s the client’s project, not mine.
2)  I should not have allowed the client to change the arrangement, which is – in effect – what he did.  CPiQ’s deal with the Tim had nothing whatsoever to do with me.  They can make whatever deal they want, but my job was to deliver models – painted to the agreed upon standards – to the original party.  At that point, I would have been free to enter into another arrangement with the new owner to update the army with new models or details.
So the new arrangement I mentioned would have included the time for additional detailing plus the time for adding models at the new standard.
3)  I need to charge what my time is worth.
The deal as it stands is great for CPiQ and Tim, because the value is coming out of my end of the bargain.  But… and this is important… the mistakes that created the situation were mine.
I’m just thinking maybe some of you out there can avoid making the same ones!
* * *
That’s that!  Talk it up how you will, share similar experiences, good and bad.  And if you happen to know a commission painter who deserves a link, feel free to add it!
As well as thoughts and comments.  And hugs and gropings, too.