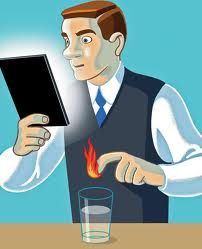 Yeah, so I’m still pretty beat after this past weekend’s Adepticon, and the old Empty Digital Headache hasn’t quite shaken order out of these scattered thoughts.  With that in mind, let’s take a left turn and talk books.

Heck, I’ll even throw in a Black Library review!

I’m a voracious reader; a trait, I suspect, shared by many of you.  Gamers have imagination – we’re absolutely riddled with it – and science fiction and fantasy fuel that like nothing else.  From about the 7th grade on, I’d smuggle in a paperback and sit in the back of the class, reading.  Doubt the textbook covering it fooled the teachers, but they seemed content to leave well enough alone.

My appetite waned these last fews years.  I’d wander the aisles at Hastings, trying to find something original, something worthwhile.  Sure, there’s always something new – but to my mind it doesn’t seem like it was anything great.  I kinda felt like I’d read everything that might possibly hold my interest past Chapter 2.   Recently, the Kindle Fire changed all that. I really can’t stress it enough.  It’s met my needs then some, and there’s never once been the, “Gosh, wish I would have held out for the iPad!”  The Fire is simply great.  It’s supported by Amazon, a service I’ve never had complaints with, and it’s fair the whole thing has ignited my addiction to fiction (heh!) like a firestorm.

Where it collects dust.  Look, I was that person, and resisted the change for a long time, but suffice it to say it’s lazy thinking.  An e-book reader isn’t as good, it’s better.

Much, much better.  The eye strain is gone; backlight is nice!  You can read faster; turning pages is so last millennium!  Mostly though, it’s nice to browse through Amazon hunting down the perfect book; it’s like the best library ever, or a mega-sized Hastings where you sit sipping coffee while scantily clad attendants (your choice of gender, for all the Unicorns out there) serve up authors and titles you’ve never heard of.

Sorry, I channeled some Gor there for a moment.  The less said about that, the better.  Point is, the Kindle Fire is a great e-book reader, but if the iPad or Nook is your thing, fine.

I suppose you could still do paperback.

* * *
Okay!  Let’s get on with it already.  Here’s the books I’ve worked through these last few months with a few words about each.  (Note, the titles are links to the Amazon page.  Bell’s format doesn’t show hyperlinks too well.)
The Forever War
This was a recommendation from Amazon, and it couldn’t have been more perfect.  It’s one of the two books I’m currently reading, so the ending remains a mystery, but it’s fantastic.  If you like science fiction or military fiction, this is right up your alley.
Mandela is conscripted at the beginning of a war with the Taurans.  Einstein is a constant companion, as relativity exerts its ruthless effect across travel though distant stars.  This book is vivid and scary, as its portrait of warfare feels eerie and accurate.
A Universe from Nothing: Why There Is Something Rather than Nothing
By Lawrence Krauss, a theoretical physicist, this is big concepts dumbed down for laymen… as it must be, darn it all.  If there’s one regret in my life, it’s that all the best ideas seem written in a language I’ll never understand.  Physicists always seem at pains to interpret concepts that just don’t seem to translate well! This book does it.
I could do without the, “Don’t need God for this,” angle, but then I just don’t care.  Not sure God does either, but there you go.
Free Will
This is by philosopher Sam Harris, and the e-book version is dirt cheap.  Like many modern works of philosophy, it’s essentially an argument.
If you’re curious, here’s a spoiler.  His argument is, “It’s bunk.”  But then, he’s just a zombie.
Like you.  Read on, meat puppet!  You may think you’re enjoying this article; you may think you hate it.  Either way, it appears you’re wrong…
Spin
Ah, pure science fiction!  When done up right, like in this book by Robert Charles Wilson, it just seems there’s nothing better.
Imagine you’re watching the stars, but the stars go out.  Satellites fall from the sky.  It’s determined the sun is an illusion, and weather controlled.  Eventually, the powers that be learn the planet has been shielded.  The catch?  The earth is hurtling through time.  Given our 13.72 billion years is an eyeblink in the vast desert of time, it won’t take long before the stars outside go out…
House of Leaves
This is a book that defies description.  Further, it’s probably the only one that won’t be available as an e-book.  It won’t work.
It’s a love story.  It’s not a love story.  It’s a horror story, but it’s not.  It’s certainly horrible, certainly beautiful.  I could tell you about it, but it wouldn’t make sense. Let’s take a stab.
A photographer and his family move into their dream house in the country.  Turns out, the dimensions in the interior don’t match the exterior.  Eventually, a door appears in a hallway.  A video is made… and the book is the edited version of a previously edited document referencing the video, but the current editor is going a bit mad – all in the footnotes.  The video is called The Navidson Record.
Confused?  Forget all this.  If you like books, buy this book.  It’s a beautiful, scary story, and there’s little doubt it will survive generations:  it’s that good.
Dust Warfare Core Book
I picked this up at Adepticon, and there will be a longer review at some point.  I’ll say this, in my mind this game is the natural complement to Warhammer 40K.
This is what people will be playing for years to come.  Just my prediction.
Reamde: A Novel
I’ll leave it with this, a novel by Neil Stephenson.  It’s a modern day movie-in-a-book, a next-gen thriller.  And part of the environment is a game, a World of Warcraft spinoff with a twist.  The design allows for a class of players to earn income in all the ways we see today in current games…
…just legitimized and controlled, an internal economy.  Then it gets raided!  Real money is lost, since the raid locks up software unless a payment is made.  Online.
Naturally, some poor bugger’s timing is horri-bad and gangsters lose real cash, setting off the events that follow.
My description doesn’t do this book justice; Neil Stephenson is a rockstar, a literary ninja.  His first book, Snowcrash, was the best cyberpunk story ever written – at least, in my opinion.  Here’s a LINK to Amazon’s, but the point is anything this dude writes is top shelf.
Horus Heresy: Know No Fear
Last but not least, here’s the other book I picked up at Adepticon.  I started reading it on the trip back Sunday, but I’m not quite finished.  Regardless, it delivers what is, to my mind, the whole promise of the Horus Heresy series to being with.
Marine on marine action!
Seriously, the Word Bearers and Ultramarines go after it.  It’s pure Dan Abnett, exciting yet approachable.
There’s a scene I desperately want to share with you, except we all know the lawyers at GW frown on such things.  I’ll leave it at this:  there’s one scene that sticks out, where you almost have to push the book away from your face to escape.
Turns out, it can rain Superheavy Tanks.  That’s not a good thing.
* * *
There you have it, boys and girls, children and Unicorns of all ages!  Another week and another article, come and gone.  Even if it is a day late this week.
Oh well.
There’s no doubt in my mind a bunch of you are book junkies – and it’s my hope you’ll drop some tips yourself.  I want to know what you’re reading, what you’re recommending.  So out with it already!
That’s it then.  Thoughts?  Comments?  Hugs and gropings?