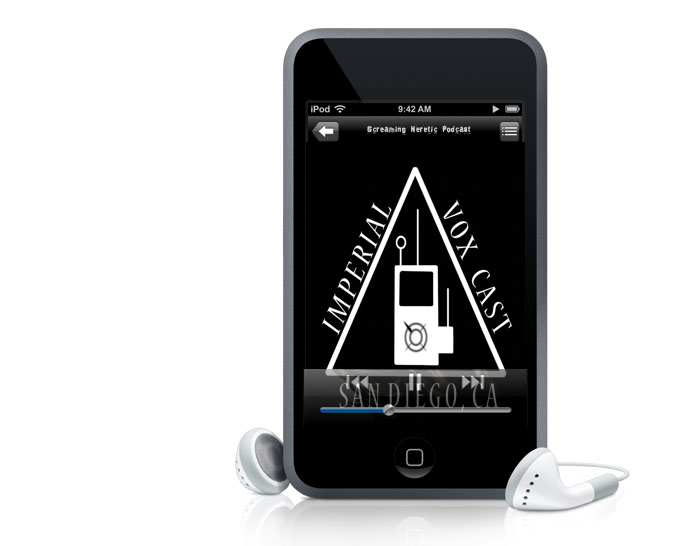 Highlights: This week Bill, Silas, Dawson and Mike are all in studio and recording. The guys open up the show with what they have been doing lately in gaming and the hobby. This included some league games and Mike’s and Silas’ most recent tournament experiences. Next up was the main topic for the show, which is an interesting ‘fantasy draft’ style of building a list. Each cast member built a 1500 point list with a set force organization where they were able to pick units from any codex, and their picks take that unit off of the board to choose from for everyone else. Similar to how you would draft a fantasy football team, we get to listen to all of the fun of the full draft. They then had a follow up to the draft and discuss what their plans were and how their lists turned out.

Opinion: This was a really original idea for a show that I completely was blown away by. This week’s show was really a lot of fun, and I could feel myself getting into the draft and making my own picks versus the guys. It was something very different, and quite impressive to hear. Easily my favorite for the week!

Highlights: This week’s show is dedicated completely to the Valhalla Ice Warriors! They open up the show with what they have been doing lately in the hobby, including painting and gaming. They move on to some news from GW, the Black Library, and Forgeworld along with some third party releases as well. Up next, in the ‘Librarius’, the guys dig into the full backstory of the legendary Imperial Guard regiment, the Valhalla Ice Warriors! They cover where they draw their inspiration from in the real world, and move on to the origins of this regiment. Next, in the ‘Armory’, each of the cast members builds a list in the theme of the Valhalla army. Jim takes the 1000 point list, Chase too the 1500 point list and Chris rounded it out with a 2000 point list. Then in the ‘Hobby Trenches’, the guys discuss how they feel about the new GW paint line and more specifically about the name changes to the entire line. They then move on to cover some of the other major paint lines out there, and what they prefer. They close out the show in the ‘Briefing Room’, where Jim leads a discussion about running his narrative event at the Bay Area Open.

Opinion: This show really had it all this week! There some phenomenal fluff discussion about an Imperial Guard regiment I have seen but did not know much about, a great hobby discussion about new and alternative paint lines, and Jim’s incite on running a narrative event. A really top-notch show this week, I highly recommend!

Highlights: This week’s show is a reflection back on the last two years of the show, celebrating their 50th episode! The boys open up the show with ‘the Workbench’ and each of the cast members go over what they have accomplished in their hobby. Next, the guys look back to the origins of the show and how the show has vastly improved their local gaming group. Also, how the show has helped them connect to new gaming groups in their area. Then, members of their gaming club came onto the show and discussed the impact or the show on the gaming club. Next, the guys look back on their previous episode and all of the fun they had recording the ‘Golden Throne Awards’! They talk about what it took to get that show prepared and recorded, and the voting that took place behind the scenes. To close out the show, the guys do their ‘Forbidin Lore’ segment and cover the Dan Abnett book ‘Know No Fear’.

Opinion: This show was really just about the fun of the show. They take the time to look back at the impact it has had on their local community and how it has added to their enjoyment of the game. The ‘behind the scenes’ look at the ‘Golden Throne Awards’ was also just a lot of fun to hear how that great show came together. I also want to extend my personal congratulations to Carl, Jeff, and Zach on their 50th Episode!

Highlights: The boys open up the show with some GW news, talking about the new paint range, some new releases from Forgeworld, and the Black Library. Next, the guys move on to local Overlords news before covering their week in gaming and the hobby. Then, Ciaran leads a product review of the new Iron Hand Tactical Squad. They cover the contents of the box and the metal upgrades that it comes with. Then, in the ‘Uplifting Primer’ segment, Jon leads a discussion about how well the Horus Heresy novels have portrayed and developed some of the Space Marine Legions. They start off talking about the Traitor Legions and talk about which Legions they have learned the most about during the series and which ones have been the most fleshed out. Next up in ‘Top Chat’, the guys have an open conversation about the BBC’s coverage of the 25th Anniversary of Warhammer 40K! This migrated into a conversation about the hobby in general, prices, and the evolution of the game over the years. They close out the show with ‘Dagmire’s Tavern’ where he and Steve offer up some tips and tricks for painting and modeling on the road, away from the comforts of home.

Opinion: This podcast really showed me why I tune in each and every week! I really appreciated Ciaran’s break down of the Iron Hands box set, it gave me an idea of what I would be getting into with that kit. The Uplifting Primer had an outstanding topic that I could have heard a lot more of, and Dagmire had another great topic idea for painting/modeling on the go! Love it guys!

Highlights: This week MarkDawg from the Overlords joins the crew as a guest host and they open up their show with ‘This Week in Gaming!’ This included a review of Neil’s most recent RTT, and Mark’s experience at a tournament in his local area. Next, in ‘Pat’s Corner’, Pat has an interview with Julian from their forums and they discuss the Grey Knight list he took to the Bay Area Open. Pat also has an interview with Simon and they talk about his DOA-ish Blood Angels list. He also has an interview with Chris and Doc from the CelestiCon 2012, Reece from Frontline Gaming about KingdomCon, and Joe from the Screaming Heretic podcast. To close out the show, the Ralph segment, now joyfully renamed to the ‘Guillermo’ segment, is back and this week is part one on the subject of Kill Point Denial lists. This section focuses on multi-objectives missions and how to win them. It is also an overall look at Kill Point Denial list as a whole.

Opinion: Good show this week, and it was great hearing from MarkDawg as he has been absent from the Overlords as of late. The part I enjoied the most, and I am sure will continue to enjoy for several week’s was once again the ‘Ralph’ segment. I know Kill Point Denial lists have been my bane in many a tournament and hearing how to run and destroy these lists with be eternally useful!

The Eternal Warriors – Episode 35 ***Explicit*** Sportsmanship, the good and the bad